Alankrita Shrivastava’s new feature film takes feminism on the Hindi screen to a welcome new high, with a fine balance of humour and pathos. Lipstick Under My Burkha is as ironically comic as it is a searing drama, and blunt in driving home its point.

The film signals quiet rebellion simmering within the psychedelic maze that is small-town India, where women have forever led a claustrophobic existence.

Not all protagonists in the film are women in burkhas or bear a Muslim identity. The title basically alludes to desires a woman may harbour silently, beaten down by overbearing male domination.

Shrivastava opts for an irreverent style to bring out that essence. Her story unfolds in the bylanes of Bhopal, bottled-up yet buzzing with chaos. That backdrop perhaps symbolises the state of mind of her female protagonists, even as it mirrors a confused society that has forever resisted giving its women their due.

Director Shrivastava, who has also penned the story, uses old Bhopal as a background of four women whose lives are interlinked. 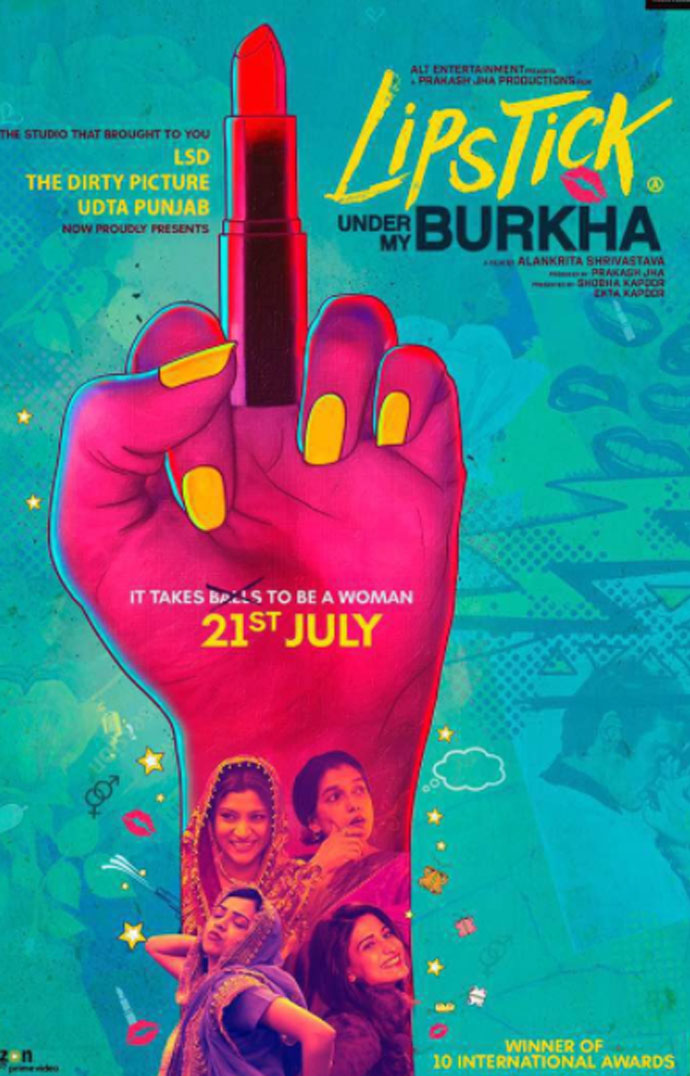 Lipstick Under My Burkha is as ironically comic as it is a searing drama.

Rihanna (Plabita Borthakur) seems like your average college girl who digs Led Zeppelin — except that she isn’t. She can’t leave home without her burkha, her stern father ensures. He is an old-fashioned tailor of burkhas who rents accommodation for his family in the dilapidated Hawa Manzil owned by the widow Usha (Ratna Pathak Shah), known to all as Buaji.

Among Buaji’s other tenants are Leela (Aahana Kumra), a small-time beautician who lives with her mother, and Shireen (Konkona Sen Sharma), a mother of three who is a gifted salesperson.

Rihanna wants to be a pop star like Miley Cyrus, whose picture hides beneath the motivational poster on her wall. Leela is having a secret romp with the mohalla photographer, though her mother plans an arranged marriage for her.

Shireen’s husband (Sushant Singh) will not let her venture out for work, so what if she is good at it and he earns nothing. Buaji, in between fighting a local builder who plans to usurp her property, discovers sexual mojo all over again at 55, on meeting the hunk who is to coach her in swimming.

That’s how individual stories of these women take off, exploring a different thread of misery through bittersweet layers and ultimately ending on a common plane: all these women are shackled by similar chauvinistic diktats.

You can feel Shrivastava has painted almost every male character in a hue of black, according little or no redeeming shade of grey. Presumably, the idea is to give the broad picture of the male mentality in India.

The plot-pusher for each story is the one thing no one (particularly women) must openly talk about — sex. Credible writing makes merry with the idea, cocking a snook at societal hypocrisy but never getting grotesque about it.

Lipstick Under My Burkha is a culture shift for Bollywood, a brilliantly audacious update on how Hindi cinema perceives women. Let’s hope this is not a one-off case.