A woman's heart is lighter, exclaims Reena (Manisha Koirala), only to be interrupted by Sunil (Jaideep Ahlawat) — "but beats faster and there are eleven more differences".

As Anurag Kashyap, Zoya Akhtar, Dibakar Banerjee and Karan Johar set out to explore modern-day Indian relationships with their latest anthology on Netflix, Lust Stories is different from the usually shown sweaty, boisterous sex between clueless men and "liberated" women (casually throwing around curse words) that has been Bollywood's idea of making a "feminist" statement. Lust Stories has all these elements - but also, more.

The four films, though not flawless if seen through a critic's lens, can be called almost-perfect in the treatment to each story centred around women. To a newly woke India where feminism and/or women's liberation is mostly looked at and measured through the sexual freedom quotient, or how accommodating you were of women and films like Veere Di Wedding, Lust Stories definitely takes the discussion on Bollywood's sexual awakening a step ahead, beyond the jaw-dropping "M" bomb, out of liberal drawing rooms and social media timelines.

In India, lust, or the absence of it in life is essentially associated with women, because men never have to talk about it as a problem. Yes, that's right, you won't know how it feels to be hungry when you are always well fed.

The four stories here revolve around women and their place in a relationship. The one thing in common here is, no, not lust, but their stubbornness to live life on their own terms.

However, living life on one's own terms gets a refreshing treatment in Lust Stories from the banalities that Bollywood has been forcing upon us of late. 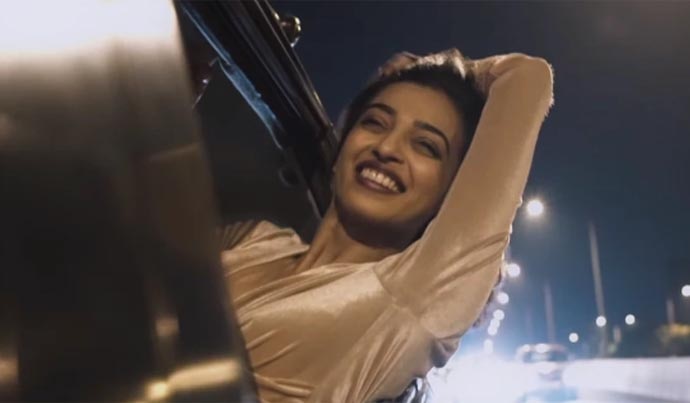 The not-so-monogamous Ma'am: Radhika Apte as Kalindi. [Screengrab/Netflix]The same directors who got together to make Bombay Talkies have returned with an old and neatly packaged theme — lust — which eventually unveils the layers of different emotions in a woman; an almost neurotic Radhika Apte, a cynical Bhumi Pednekar, a unruffled Manisha Koirala and a self-discovering Kiara Advani.

Kashyap's Kalindi ma'am (Radhika Apte) is a college teacher, carefree and well-read, discovering passion and associated guilt with possessiveness for a younger man, her student Tejas (Akash Thosar). She is judgemental and nasty too, judging the young man by his love for Chetan Bhagat.

But between her confusing monologues with the audience —  about an ex-boyfriend's appreciation for monogamous penguins, and Amrita Pritam and Draupadi — Kashyap, sadly, reduces Kalindi (read women) to the same old grudging lover, possessive and bitter, stalking the man and grudging his supposed girlfriend. However, since it's Kashyap and Apte (and their reputation for being brilliant), the audience would forgive and forget and move on to the next subject — Zoya Akhtar's Sudha, a maid.

Dibakar Banerjee's film is the third in line. A middle-aged married woman (Manisha Koirala) who feels trapped in her more than a decade-long marriage and settles for an illicit physical relationship with her husband's best friend (Jaideep Ahlawat). The man-child and her husband, Salman, played by Sanjay Kapoor, is actually relatable. What is more relatable is his reaction when his wife reveals the truth about the man she is involved with (no, there's no screaming or glass-breaking).

This is where Banerjee makes a confession on behalf of all men, with great subtlety, about fake 'male pride' — the much hurt 'masculine ego'.

A man can weep like a child, but the world should never come to know about it. Manisha Koirala as the wife who is too bored of waiting for her husband to grow up, stands out as always, maintaining that certain mystery about her.

The fourth story is Karan Johar's baby and nurtured in Bollywood-esque insouciance. But full marks to Johar for not being pretentious about his Kabhi Khushi Kabhi Gham-style of filmmaking, liberally sprinkled with "teacher-detergent", "Telegram-Instagram" jokes. Lines like a mother complaining about her daughter to her teacher — "when she starts in the morning, her skirt's in Lucknow, by the time she reaches home, it reaches Kanpur" or "Puri hoi jayegi hasrat, bandh karo ye kasrat", no matter how cheesy they sound are true about Indian middle class aunties. Also, you simply cannot make a feminist statement by looking at reality through "affluent India" glasses. The only thing that sticks out is Johar and his love for seductive teachers. He may have come a long way from his Kuch Kuch Hota Hai, but still finds jokes about a voluptuous teacher (Neha Dhupia) in a low-cut blouse and a lusting principal the funniest. However, one can't deny that Johar's not-so-unaware young bride and fat-brained husband Vicky Kaushal (though boring and run-of-the mill) live very much amid us.

The finest in Lust Stories could have been stored for the audience till the end. Since they didn't do it, we are talking about it now — the story that Zoya Akhtar chose to tell is the shortest among the four (just about 20 minutes of the total two hours) and appears second in the compilation. In many ways, this could have been the "climax". Unlike the stereotypical Kanta Bai blabbering her way into her employer's household (that Bollywood has made us believe all maids are), Sudha hardly speaks.

Actually, Akhtar's Sudha could easily pass off as the quintessential middle class housewife, cleaning up the mess of the man she works for without a fuss, diligently sweeping, mopping, cooking, washing and noiselessly getting in and out of the house. The audience would not come to know that she is not the wife, except when every time she rings the doobell to get inside, takes off her chappals and puts them on again once her chores are done - and then leaves. She does everything else, including satisfying Ajit's (Neil Bhoopalam) physical needs, and touching the feet of his visiting parents.

Though Sudha's story could have been a little longer, the unspoken words and unrequited love here are enough to speak about the boundaries — the chasm that the maid can't close and instead chooses to stoically navigate, serving tea and biscuits to her sexual partner and his would-be wife.

There is very little one can make out from her expressions — though initially, she appears to be hit by the fact that Ajit is getting married. Sudha carries on with the same restrained, dignified look about the house and her life.

Well, a woman's heart could indeed be lighter, but the eleven other differences still remain a mystery.