Mahendra Kapoor: The playback singer who did not need a sound system

Today, January 9, 2021, is the 86th birth anniversary of the singer who owned the bastion of patriotic and religious songs in Bollywood

I was reminded of this poem by Charles Kinsley when I heard Mahendra Kapoor sing on a winter evening in Chelmsford Club lawns, New Delhi in the early 1990s. He started the program with the title song of BR Chopra’s Mahabharat TV Serial which had created a sensation in the country when it was aired from 1988 to 1990. “Atha Shri Mahabharat Katha/Mahabharat Katha/Katha Hai Purusharth Ki Yeh /Swarth Ki Parmarth Ki”, he sang the Raj Kamal composed serial introduction with no holds barred. It was a full-throated voice, without filters, emanating from the pit of the stomach and demanding everyone’s focused attention. The audience was still, the bearers stood at attention, the club suspended its service. Kapoor did not need a sound system. But there was one, of course, and because sound travels farther in chilly weather, most of Lutyens’s Delhi would have heard him.

This sound quality, this timbre, this pitch, this loudness was Kapoor’s default setting. That is the way he normally sang. That is why he was so good in patriotic songs – songs that trigger passion, stir the fervour for the country, move the throng. I once saw the Indo-Pak Retreat Ceremony at Hussainiwala Border, Ferozepur. Sandese Aate Hain from Border (1997) was being played on a loop on the Indian side. The effect on the Indian audience was tepid. Kapoor’s Mere Desh Ki Dharti from Upkar (1967) was the tonic required to work the crowd into a frenzy. The song is timeless. Patriotic songs do not have a shelf life and this song is among the best, never mind that it was released in 1967. He has more in his armoury, from ‘Jaagega Insaan Zamana Dekhega’ (Aadmi Aur Insaan, 1969), ‘Hai Preet Jahaan Ki Reet Sada’ (Purab Aur Paschim, 1970), ‘Mera Rang De Basanti Chola’ (Shaheed, 1965), and many others.

Similarly, his unrestrained voice suited religious songs to stir religious ardour amongst the devotees. Every episode of Mahabharat was incomplete without a four-line verse in his voice, summing up important situations occurring in the episode. His devotional oeuvre is impressive. My wife insists on playing his Om Jai Jagdish at the Diwali Puja. He was a congregation singer – be it patriotic or religious, be it a parade ground or a Mata ki Chowki. His stentorian voice was what the good doctor had ordered to rouse people.

At an open-air Income Tax Sports function in Mumbai (I was the President of the Tax Sports Club), he was the Chief Guest. He sang ‘Mere Desh Ki Dharti’ at full throttle bringing the house, consisting of hundreds of officers and men, down. His muscular voice had that ability. Yet that very voice and that unbridled style was his undoing. It did not work in mainstream songs. 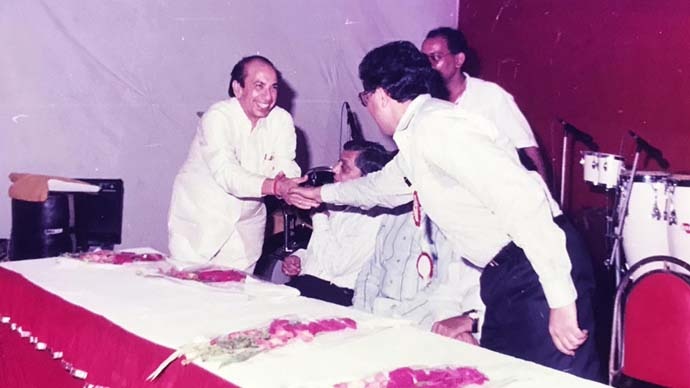 That is why Kapoor remained on the fringes of the Hindi film music industry. His output may have been prodigious but the respect and recognition that his peers got came his way only in modest measures. He never got a seat at the high table. The Department of Posts issued ‘Legendary Singers of India’ stamps in 2016 to commemorate (amongst Hindi film singers) Rafi, Kishore Kumar, Mukesh, Hemant Kumar, Manna Dey, Shamshad Begum, Geeta Dutt, Bhupen Hazarika and Talat Mehmood. Kapoor was missing. Each of these singers had their own distinctiveness. Each had a place in the musical scheme of things. Each was different. Each sang with sensitivity. Each used an in-built modulator. Most importantly, each was mainstream. Kapoor was superficially close to Rafi in the voice department, but a very distant second. In terms of versatility, he always remained in the shadow of Rafi.

N Datta (with BR/Yash Chopra and Sahir) composed one of the gentlest romantic songs ‘Aaj Ki Raat’ (Dharamputra, 1961) for Kapoor. Even ‘Tere Pyar Ka Aasra Chahta Hun’ (Dhool Ka Phool, 1959 — made with the same team) which Kapoor sang with Lata, otherwise in the high octave, has a pleasant, endearing quality about it.

Listen to this song from Gumraah (1963). Kapoor opens the song as loud as is humanly possible, but with honey-soaked wool wrapped around it. The stanza is in the upper regions but could lull a baby to sleep. That was the genius of Ravi; that he could put brakes on the runaway wild horse that critics dismissed Kapoor as. Ravi was also responsible for Kapoor’s first two Filmfare Best Singer awards for ‘Chalo Ek Baar’ (Gumraah), and ‘Neele Gagan Ke Taley’ (Hamraaz). This was at a time when Rafi was at his peak. Incidentally, Rafi’s first Filmfare Award for ‘Chaudvin Ka Chand’ (Chaudvin Ka Chand,1960) was also Ravi’s doing.

Unfortunately, the other music directors failed to tame him except in a few songs. OP Nayyar, who I knew personally, never a Kapoor fan, had to perforce use him when he had a fallout with Rafi. Most of the Kapoor songs of OP Nayyar’s would have gone to Rafi, had the fight not taken place. OP Nayyar’s music usually had the Punjabi robustness, so the songs were ideal for Kapoor, a Punjabi. But the warmth was missing. The songs were clinical, devoid of soul. OP Nayyar, otherwise a martinet in the studios, could do nothing. He would tell me how frustrating the experience would be. He would give me the example of ‘Tareef Karoon Kya Uski’ (Kashmir Ki Kali, 1964). It is a song that can be heard all over Dal Lake and beyond. But Rafi eschewed rawness in his serenading, never mind the volume. With Kapoor, Sharmila Tagore would have pushed Shammi Kapoor off the shikara.

Take the case of Manoj Kumar whose ghost voice was Kapoor. Manoj was Kapoor’s strong advocate, so much so, that he pressured even a Naushad to replace Talat Mahmood with Kapoor in the duet with Rafi — ‘Kitni Haseen Aaj Bahaaron Ki Raat Hai’ (Aadmi, 1968) — even after this duet's disc had been released. But even Manoj knew Kapoor’s limited area of expertise. In Upkar (1967), when he wanted a sturdy voice, he took Kapoor (‘Mere Desh Ki Dharti’), but when he wanted gentle emotions and pathos, he took Mukesh who had been doing playback for Manoj since Manoj’s entry into the film industry (‘Deewano Se Yeh Mat Poochho’). In Purab Aur Paschim (1970) he did likewise — rabble-rousing ‘Hai Preet Jahan Ki Reet Sada’ with Kapoor and the plaintive ‘Koi Jab Tumhara Hridaya Tod De’ with Mukesh. It happened in Shor (1972) with the rousing Jeevan Chalne Ka Naam with Kapoor and the emotional Ek Pyaar Ka Naghma Hai with Mukesh and Lata. In Roti, Kapda Aur Makaan (1974), Kapoor sang the accusatory ‘Aur Nahin Bas Aur Nahin’ (which fetched him his third Filmfare Award) and Mukesh (with Lata) — ‘Main Na Bhooluga’. In Kranti (1981) he kept Kapoor for the religious-nationalistic ‘Ab Ke Baras Tujhe Dharti Ki Rani Kar Denge’ but kept Mukesh’s son Nitin Mukesh for ‘Zindagi Ki Toote Na Lari’.

So, Manoj too, despite his unstinted support to Kapoor, knew which songs to use him for. The ones, where Kapoor did not fit the bill, were usually given to Mukesh.

No song can depict this contrast more starkly than ‘Jo Chala Gaya Use Bhool Ja’ (Saathi, 1968). The song begins with “Bhool Ja, Bhool Ja” sung at a high pitch preceded and accompanied by dramatic eerie music, followed by Mukesh’s contemplative “Jo Chala Gaya”. Kapoor got pigeon-holed in such categories of songs.

So, there you have it — a great singer in the patriotic/devotional genre, an outstanding singer when in the magic hands of Ravi (and N Datta) for all genres, but not quite fitting the requirements of the other category of songs. That is why most of the music directors kept away. When you had the choice of a thoroughbred like Rafi, why take a workhorse?

Not that he was not a trained singer. Born in Amritsar to a family of cloth dealers, they shifted to Bombay when he was still very young. Interested in music since childhood, he trained under Ustad Meherji, Ustad Niyaz Ahmad Khan and Pandit Tulsidas Sharma. He auditioned for All India Radio but was rejected! However, he got his first break when Music Director Snehal Bhatkar got him to sing Tere Dar Ki Bheekh Maanti Hai Daata (Diwali Ki Raat,1956). That year he also sang a song in Lalkar (1956) — ‘Is Man Ki Nagaria Se’. However, his career did not take off.

Let us see how the judges treated him thereafter. Under Naushad, Kapoor took a start with ‘Chaand Chhupaa Aur Taare Doobe’ (Sohni Mahiwal, 1958). However, the other songs were in Rafi's voice. Naushad explained that he needed to give a chance to Kapoor having picked him up as a winner. Thereafter, offers dried up.

Madan Mohan, the junior-most among those five judges, never tuned with Kapoor.

Shankar Jaikishan did not use him much. The song ‘Har Dil Jo Pyar Karega’ (Sangam, 1964) where Kapoor sings for Rajendra Kumar (whose playback was normally done by Rafi) has an interesting history. Raj Kapoor had grown very fond of Kapoor during a tour of Russia and promised him a chance to sing for the second lead in his films. Kapoor remarked that Raj would forget his promise once he reached India, but Raj took the cigarette he was smoking and burnt his hand and said the mark would remind him. But nothing else came his way after this song even though Kapoor did a great job.

His bread and butter came from Kalyanji-Anandji, Ravi and OP Nayyar (who ditched him as soon as he patched up with Rafi) and other assorted music directors.

As a person, he was a thorough gentleman. Not once did Kapoor offend even the humblest composer, be it Chitragupta or Usha Khanna. He was the quintessential Mr Nice.

Kapoor sang in many Indian languages including Gujarati, Punjabi, Bhojpuri, and Marathi movies. In Marathi movies, he was the voice of Dada Kondke.

He was asked by the group Boney M to sing their songs in Hindi with Mussarat from Pakistan, which resulted in the Pop Album M-3 (1981).

Looking at the calibre of competition he faced throughout his career in films, Kapoor managed to accomplish a fair amount. But he deserved more. The composers other than Ravi/N Datta could not or would not draw out his softer side. Perhaps he had been typecast in the patriotic/devotional/ boisterous genre too deeply for them to experiment with him. Perhaps he consciously let himself be compartmentalised to differentiate himself from others, especially Rafi.