Manna Dey was too good for his own good. On his seventh death anniversary, here is a tribute to the immense talent and humility of the singing giant.

Mohammed Rafi, THE singer, had this say about Manna Dey: “You listen to my songs, I listen only to Manna Dey's songs.” Bharat Ratna Lata Mangeshkar is a Dey fan. It is, therefore, a mystery why this singing giant remained throughout his career as an ‘also-ran’.

That he was a classical titan is acknowledged. That he was an indomitable performer is a given. That he enriched the Hindi film music’s musical vocabulary is accepted. His vocal artistry and virtuosity are recognised. Why, therefore, did he not sit in the first row? Why was he always consigned to the second place? Why did Talat Mehmood, Rafi, Kishore Kumar and Mukesh always remain ahead of him?

He was unsurpassed in classical compositions. Except for Rafi and Talat (to some extent), the other two did not count. Consider some of his songs in the classical genre: Poochho Na Kaise Maine Rain Bitayee from Meri Surat Teri Aankhen (1963), Kaun Aaya Mere Man Ke Duare from Dekh Kabira Roya (1957), Tum Bin Jeevan Kaisa Jeevan from Bawarchi (1972), Jhanak Jhanak Toree Baaje Payaliya from Mere Huzoor (1968), Re Man Sur Mein Ga from Lal Patthar (1971), Phool Gendva Na Maaro from Dooj Ka Chand (1964), Sur Na Saje Kyaa Gaoon Main and Bhay Bhanjana Vandana Sun Hamari from Basant Bahar (1956), Laaga Chunri Mein Daag from Dil Hi To Hai (1963), Aayo Kahhan Se Ghanshyam from Buddha Mil Gaya (1971), and so many others. In the Qawwali of all Qawwalis — Na Toh Karvaan Ki Talaash Hai from Barsaat Ki Raat (1960) — only this genius, with his inimitable paltaas and sargams, and total command of the Sufiana journey from the worldly to the spiritual, could have pulled off this Roshan/ Sahir masterpiece – Rafi took charge of the second half when the solid foundation had already been laid.

Manna Dey was also simply outstanding in sentimental/introspective/philosophical songs. His Kasme Vaade Pyar Wafa Sab from Upkar (1967) was so soulfully done that even Lata wondered how he emoted so well. And to think that this song was being offered to Kishore Kumar earlier! It was Kishore Kumar who said that only Manna Dey could invest the song with the emotions that were needed. And what exceptional feelings he endowed the song with! His other songs in this category include Tu Pyar Ka Saagar Hai from Seema (1955), Ai Mere Pyare Watan from Kabuliwala (1961), Jeevan Se Lambe Hain Bandhu from Aashirwad (1968), Zindagi Kaisi Hai Paheli from Anand (1971), Tujhe Suraj Kahun Ya Chanda from Ek Phool Do Mali (1969), Yaari Hai Imaan Mera from Zanjeer (1973), Nadiya Chale from Safar (1970), Yehi Paigham Hamara from Paigham (1959), and others.

But no professional singer can live by these genres only. These are niche genres. They may edify the soul, stimulate the intellect, and appeal to the finer senses. But that is it. For a commercial Hindi film singer, these cannot be the bread and butter. At best, they are a great dessert.

To survive successfully, the staple has to be songs that entertain — romantic songs, fun songs, dance songs, upbeat songs. In general, mainstream songs that occupy the middle ground, which are: easy listening, not demanding, not taxing, but commercial ‘normal' songs. And it helps significantly if the singer becomes the ghost voice of a big star. That is what Rafi, Kishore and Mukesh became. How did Manna Dey fare here? Not very well, I am afraid. But that was not his fault entirely.

Manna Dey became the voice of Raj Kapoor because Mukesh had signed a contract forbidding him to sing in another film till his film Mashuqa (1953) in which he was acting with Suraiya was completed. Shree 420 (1955) was in production and Mukesh had already sung a few songs. Manna Dey got the opportunity to sing the rest of the songs: Dil Ka Haal Sune Dil Wala, Pyaar Hua Iqraar Hua and Mud Mud Ke Na Dekh. This new voice of Raj Kapoor was taken to an ultra-romantic height in Chori Chori (1956) with Aaja Sanam Madhur Chandni, Yeh Raat Bheegi Bheegi and Jahaan Main Jaati Hun. But then, Mukesh got back and Manna Dey was shown the door. After such winsome songs, it was tragic. Manna Dey would, 15 years later, again do playback for Raj Kapoor with Ae Bhai Zara Dekh Ke Chalo in Mera Naam Joker (1971) and win the Filmfare Best Singer Award for it.

So that was a short-lived though highly successful pairing. With Shammi Kapoor, he tellingly sang as his voice in Ujala (1959): Jhoomta Mausam Mast Maheena, Ab Kahaan Jaaye Hum, Chham Chham Lo Suno Chham Chham and Suraj Zara Aa Pass Aa. But it was not meant to be. Rafi became Shammi Kapoor’s ghost voice.

One iconic song that pitted Manna Dey against Rafi, Talat and Bhupendra (making his debut) was Hoke Majboor Mujhe Usne Bhulaya Hoga in Haqeeqat (1964). Each singer had an exclusive antara to showcase his interpretation. All the singers were outstanding and Manna Dey left the unique impress that defined him.

But even in this main course, except for a few upbeat and romantic songs, songs were still suffused with seriousness. It was, for the most part, a sombre listening, provoking reflection and not necessarily pleasure. The classical underpinning was always present  –  sometimes overtly, sometimes just lurking under the surface. The smiles, the clapping and dancing which a robust Zohra Jabeen would elicit were largely missing in most songs. Songs like Yeh Dosti Hum Nahin Chhodenge in Sholay (1975) — an eternal male-bonding song — were few and far between. A song is successful if it can be hummed by non-singers. How many are there in Manna Dey’s repertoire? You figure.

Even though Manna Dey sang over 4,000 songs in all languages, including non-film songs, his success rate in the mainstream space remained limited. Why was this so?

SD Burman never considered him to be hero-playback material. Many other music directors also thought his voice was not ‘commercial’ and that it was dry and characterless. There was no attractiveness to it. That he was only good for particular kind of songs, and not for the run of the mill songs that were the mainstay of Hindi films. Some believed that he had pronunciation and enunciation problems in Hindi. He was too well entrenched in the classical mould to open out — a problem commonly associated with classical singers. Many composers would expect him to stick to plain and simple singing without any reconnaissance into the classical territory. Manna Dey was too good for his own good. He knew too much. Many music directors would have an inferiority complex around him. Once a singer is set in his ways, he cannot change his stripes.

But the biggest tragedy was that since singing was Manna Dey’s profession, and his success was confined to the classical and sentimental/ introspective/philosophical genre, with only limited success in the mainstream space, he was exploited by composers to sing for comedians. He had no choice – singing was what brought food to the table. Even SD Burman, whose Upar Gagan Vishal from Mashaal (1950) set both SD Burman and Manna Dey on an upward trajectory, used him for Mehmood in Pyar Ki Aag Mein in Ziddi (1964) and Kisne Chilman Se Maara on Johnny Walker in Baat Ek Raat Ki (1962). Roshan made him sing for Mehmood in Laagee Manvaa Ke Beech in Chitralekha (1964), Laxmikant Pyarelal made him sing O Meri Maina Tu Manle Mera Kehna on Mehmood in Pyar Kiye Ja (1966), and Chitragupt had him sing Jodi Hamari Jamega Kaise Jani in Aulad (1968), again on Mehmood. Not that Rafi did not sing for Mehmood or Johnny Walker. But the composers did not change their compositional style for such songs. If one did not know any better Ajhun Na Aaye Balma from Saanj Aur Savera (1964) could never have passed off as a song picturised on Mehmood. It is only when one watches it does one wince at the picturisation such a fine classical duet. Similarly, OP Nayyar kept his signature style similar for both Guru Dutt and Johnny Walker in the films. But the songs composed for Manna Dey clearly show the ‘village idiot’ or the ‘court jester’ style. It was clearly risqué singing and sounded double-edged on screen. Just hear the buffoonery in SD Burman’s Banao Batiyan Hato Kahe Ko Jhooti in Manzil (1960). When a classical maestro sings Meri Bhains Ko Danda Kyun Mara from Pagla Kahin Ka (1970) composed by Shankar-Jaikishan, the music directors largely responsible for his classical oeuvre, it is easy to imagine his helplessness and frustration. Ironically, in these comic songs, Manna Dey sounded boisterous and freewheeling.

Ek Chatur Naar – the famous duel between Manna Dey and Kishore Kumar in Padosan (1968) was in a different league though. Manna Dey was not at all happy to be losing to Kishore — even in the film — in this classical stand-off. But in reality, he genuinely feared Kishore. Not because Kishore was classically superior to him – not even close. But Kishore had a unique and unaffected style of singing which tended to overshadow the subtleties of classical music. The average listener would any day prefer an uninhibited, unconstrained natural style than a tight, nuanced, rule-bound, intricate style. Singing with abandon, and not caution is what most listeners prefer.

This duel is emblematic of why Manna Dey lost out to the other singers.

Manna Dey, with Asha Bhosle, sang the title song of V Shantaram’s Boond Jo Man Gayi Moti (1967) whose music was composed by my maternal uncle, the late Satish Bhatia. I pointed out this fact to him when he was the Chief Guest at a music program where I was one of the singers. He of course remembered and gave his blessings. Unlike most other participants, I just could not summon the requisite courage to sing his songs and doing even a fraction of justice to them. His songs are his songs — only the most accomplished singers can sing them with the same intensity, the same élan as he could. 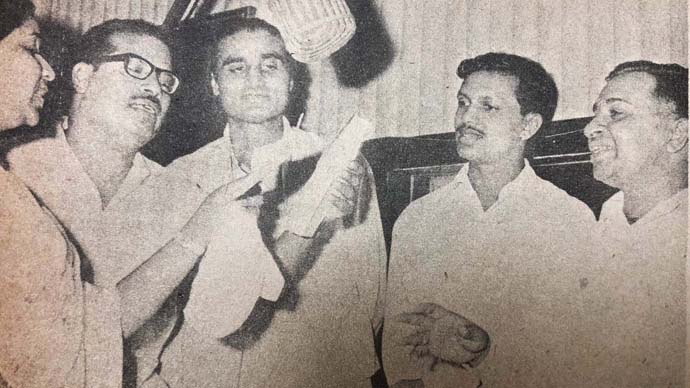 The government recognised his immense contribution to music by awarding him the Dadasaheb Phalke Award, Padma Shri, and Padma Bhushan. Incidentally, Padma Bhushan, from amongst Manna Dey’s peers, has only been given to Talat. Rafi has only been awarded the Padma Shri and no Padma Awards for Kishore Kumar and Mukesh. Critical acclaim versus popular acclaim — that is the eternal conundrum.

Manna Dey passed on October 24, 2013. On his seventh death anniversary today, I recall his autobiography Memories Come Alive: An Autobiography which is replete with his humility, his underestimation of his own true worth, his self-effacement and his acknowledgement that the other singers were better than him. But we do not have to agree with his self-assessment. For a vast legion of music aficionados and common listeners, his songs have provided not just joy but also solace, appealed to both the heart and the mind. His lines from the Basant Bahaar (1956) song describe his artistry the best — Sangeet Man Ko Pankh Lagaye, Geeton Se Rhimjhim Ras Barsaaye, Swar Ki Sadhna Parmeshwar Ki.

Also read: Why Kishore Kumar's voice will forever echo in our hearts

#Playback Singing, #Classical Music, #Hindi film music, #Mannadey
The views and opinions expressed in this article are those of the authors and do not necessarily reflect the official policy or position of DailyO.in or the India Today Group. The writers are solely responsible for any claims arising out of the contents of this article.