Why Manoj Bajpayee is no fiery Bhiku Matre today

The acclaimed actor has come a long way, but lost his joie de vivre on the road.

Amongst the other things that separate Manoj Bajpayee from the rest of his ilk the one that truly stands out is the manner in which he went from being an extra to a leading man. In a day and age when a "hero" has to be launched and the talented-but-not-blessed-with-classic-leading-man-looks can either be seen as the strong parallel lead or a different kind of hero in the hatke variety of films, Bajpayee went from an unknown hanger-on in Droh-Kaal (1994) to a noticeable face in Bandit Queen (1994) followed by the ignominy of being the silent sidekick in Daud: Fun on the Run (1997) to a supporting act Tamanna (1998) to almost a parallel lead in Satya (1998) to finally the lead in Shool (1999). In a manner, Bajpayee mirrored the route taken by a Vinod Khanna, an Amitabh Bachchan or an Anil Kapoor and when combined with a similar everyman demeanour, Bajpayee was indeed a throwback to the concept of traditional popular Hindi cinema. His arrival as a bona fide lead with Shool, too, was an updated interpretation of the angry young man template of the 1970s and even had a dash of Ardh Satya (1983), the parallel cinema's version of the angry young man. In essence, then one would have imagined that commercial Hindi cinema would not only celebrate him but also give him roles befitting a star but things didn't pan out that well. Bajpayee more than got interesting roles and he managed to strike a balance of sorts between the kinds that expected him to a traditional Hindi film hero such as Ghaath's (2000) disgruntled with the system a la Arjun (1985) young man and the ones that could help him raise the bar as far as the actor within was concerned like the merry but unpredictable white-collared city slicker in Kaun? (1999), a small-town bloke who lands in the big bad city with bigger aspirations in Dil Pe Mat Le Yaar!! (2000).

Even though most of the films that followed Shool where Bajpayee played the lead weren't big commercial successes they didn't impact his stock adversely. Bajpayee had managed to cover the entire spectrum by working with Shyam Benegal as the lead in Zubeidaa (2001) and being the super villain to the ultimate hero, Amitabh Bachchan in Aks (2001) in a single year but when both the films failed it was Bajpayee who suffered the most. Having risen against the odds to become a leading man, Bajpayee possessed the quality to transform himself into what popular Hindi cinema would accept but what he didn't prepare for was the change that commercial Hindi cinema would undergo itself. The time when Bajpayee was shifting gears post-Aks with roles that would stand out such as Road (2002) and Pinjar (2003), leading men were being cast in chic urban roles like Kaho Na Pyaar Hai (2000) and Dil Chahta Hai (2001). Bajpayee couldn't fit that model and as a result somewhere slipped out of the A-list.

It is rumoured that Rakeysh Omprakash Mehra had originally planned Rang De Basanti (2006) with Bajpayee in the lead and later offered him the role that was ultimately played by Atul Kulkarni.

Bajpayee has always been the kind of actor who could effortlessly infuse life into characters irrespective of the length or scope of the role. You could see this trait in Bandit Queen, where the world first noticed him, and Swabhimaan, the daily soap where he played a lawyer. But the thing that truly undid Bajpayee's run was the fact that between the beginning of the new millennium and the arrival of the New Hindi cinema where the lines between different kinds of cinema became faint there were no takers for Bajpayee. 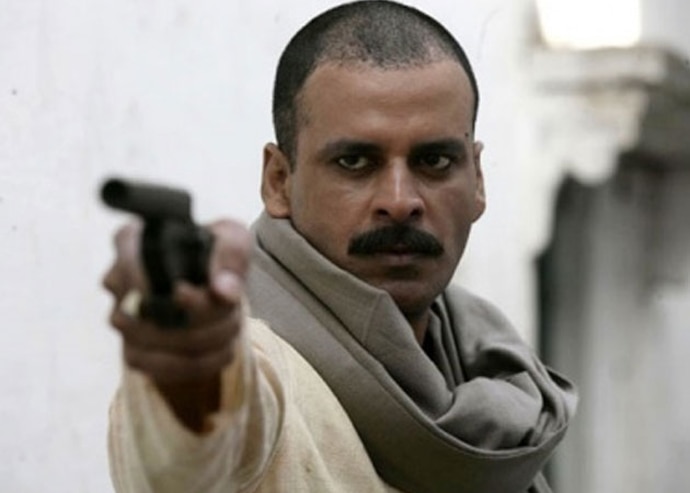 As Sardar Khan in Gangs of Wasseypur.

Goethe once observed that what a man does not understand, he does not possess. It would be an unfair assessment to believe that Bajpayee couldn't carry on as the typical popular Hindi cinema hero because he simply didn't have it. He continued to be play the lead in films that came along - Inteqam: The Perfect Game (2004), Hanan, (2004), Jaago (2004), Fareb (2005) - and also featured in supporting roles in big-ticket productions such as Veer-Zaara (2004) and Bewafaa (2005) but these roles were largely perfunctory and the films mostly run of the mill.

The ones that he expected to turn the tide either got stuck in distribution hell like 1971 (2007) or simply didn't fly like Swami (2007), a film that got Bajpayee great acclaim but was hardly seen by many.

With Prakash Jha's Raajneeti (2010) Bajpayee entered a new phase and although both the film, as well as Bajpayee, were over the top at most places, his performance displayed enough instances to remind people of his brilliance. Manoj Bajpayee Ver 2.0 followed the past to strike a balance between different kinds of roles and cinema and this once the slightly newer New Hindi cinema had something more substantial to offer. Bajpayee to be honoured with Dadasaheb Phalke award for his professor act in Aligarh.

In the past few years, Manoj Bajpayee has delivered two stellar performances in Anurag Kashyap's Gangs of Wasseypur (2012) and last year's Aligarh (2015) where he played Dr Shrinivas Ramchandra Siras, who was suspended from the Aligarh Muslim University for his sexual orientation.

The true tragedy of life is what dies inside a man while he lives and it's this bleakness that seems to have rubbed off on Bajpayee's poignant portrayal of Dr Siras.

In many ways, this return of sorts that Manoj Bajpayee has been enjoying seems to be Hindi cinema's attempt to compensate for ignoring the powerhouse of talent that he is but something appears to have died within the actor. Even though one can't say that Bajpayee's recent performances especially Aligarh or Gangs of Wasseypur missed a beat but they seem to the more interested in addressing the problem at hand unlike a Bhiku Mhatre in Satya who conveyed an entire lifetime in a single glance.

Here's hoping it's not too late for the actor to find his joie de vivre again.

#Dadasaheb phalke, #Manoj Bajpayee
The views and opinions expressed in this article are those of the authors and do not necessarily reflect the official policy or position of DailyO.in or the India Today Group. The writers are solely responsible for any claims arising out of the contents of this article.