47 years to the day she bid the world adieu, Meena Kumari is remembered for her unparalleled portrayals of the tragic woman on-screen and its echo in her real life, a story that has immortalised her in art

Meena Kumari had her share of multiple-kerchief soaking melodramas that were common in the era. But she took the female tragedy to a new level where tears and sighs were replaced by husky-silvery tones poetising the character's plight. Her nuanced expressions, piercing look and that voice made her an unsurpassed tragedienne.

The awards, public adulation, critical acclaim and box-office glory heaped on her were unprecedented then — and perhaps, even now. Journalist-editor Vinod Mehta in the biography Meena Kumari writes that Satyajit Ray described her as "undoubtedly an actress of the highest calibre". She is the only actress to create film history at the 10th Filmfare Awards (1963), bagging all of the nominations for the Best Actress award and winning it for Sahib Bibi Aur Ghulam.

Meena Kumari was effortlessly bigger than many male stars cast opposite her. In fact, actors were apprehensive to be in a Meena Kumari film. Her movies — emotionally punchy social dramas — were what can be termed “women-oriented” fare. She was in the unique position of being able to mentor male co-stars like Dharmendra, Rajendra Kumar and Sunil Dutt.

Meena Kumari ruled the box-office while she was married — Biju Baiwra (1952) — her first commercial hit, Parineeta (1953) — based on Rabindranath Tagore’s short story, Bimal Roy’s Yahudi (1958) — based on a book on the persecution of Jews in the Roman Empire. And her separation from husband Kamal Amrohi did not interfere with her reign — Kajal (1965), Phool aur Patthar (1966), Bahu Begum (1967) and Baharon Ki Manzil (1968) continued her commercial and critical run.

Because Meena Kumari was a child star who was supporting her family from the age of four, her relationship with films was ambiguous.

She was peddled around as a child star, then as a teenage actress in stunt and fantasy films, and a singer to keep the hearth burning at home. 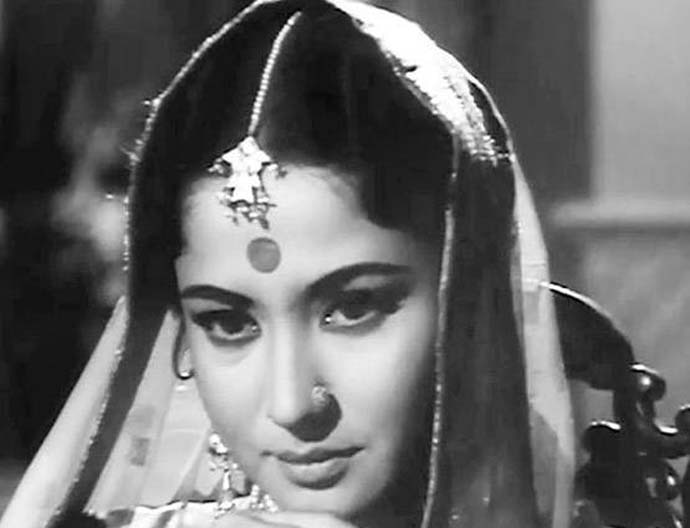 The cruelty of destiny: Meena Kumari's life was a tale of hardships — one after the other. (Source: India Today)

In an interview, she said that she had wanted to study and become a professional. But destiny had other plans. Like many child actors, her classroom was the studio, life her university, and her degree stardom — alternatively, a crown of thorns and a golden laurel.

The home-tutored actress chose to isolate herself from her stardom and to indulge her love for literature by writing Urdu poetry under the pen name 'Naaz'. Once when asked by an interviewer when she found the time to write, she replied, "You don’t need much time for that — you just write."

Meena Kumari had famously said that she never used glycerine to cry on the sets. Perhaps being a sensitive soul, her identification with her roles went deep and she found catharsis in acting out melodramatic scenes. Growing up in a poor theatre artists’ family and being a breadwinner from a tender age, working endless shifts left her psychologically scathed. An RSTV documentary described her as a cash cow that chewed stale bread and threw out gold coins.

She was robbed of a childhood and deprived of normalcy at the altar of fame and money. It must be remembered that in those days, actresses did not come from established film fraternity families like today, but from the poor households that lived on the margins of the industry as musicians, small-time actors and dancers.

It is hardly surprising that the two movies that she is most remembered by — Sahib Bibi Aur Ghulam (1962) and Pakeezah (1972) — bear echoes of her own internalised struggles. Meena Kumari in an interview said that Sahib Bibi Aur Ghulam was the most challenging role she had essayed. To show a woman drink on screen was a bold thing to do for an actress in those days. Sahib Bibi Aur Gulam — produced by Guru Dutt — is based on the Bengali novel Shaheb Bibi Golam written by Bimal Mitra. It shows the lives of the feudal aristocracy of British Calcutta. Meena Kumari’s character — Choti Bahu — is not willing to accept her lot of a bahu of a zamindar family, who sits at home bedecked in the hope of the husband showing up after his nightly rounds. She takes up alcohol to become her husband’s drinking companion in an effort to keep him home. But she soon gets addicted to the bottle.

In real life, Meena Kumari took to drinking because it seems she had chronic insomnia and her doctor suggested brandy. But the nightly shot spiralled out of control.

The role that in fact immortalised her was her swansong Pakeezah. “Pakeezah” means pure — an ironical name where the central character, Sahibjaan, is a mujra dancer, and the daughter of a courtesan and her aristocrat patron. Sahibjaan, after the death of her mother, grows up in kothas that get her fame and money — but her heart craves romance and respectability. 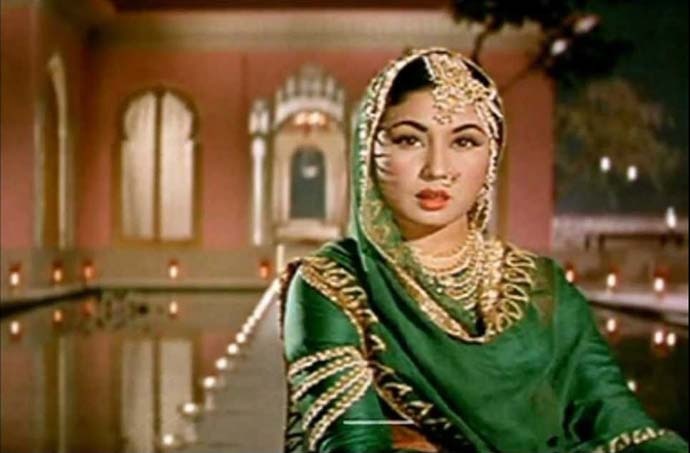 The Great Meena Kumari — None could essay the pristine courtesan in Pakeezah but her. (Source: YouTube screengrab)

What makes Pakeezah a cinematic classic is its dialogues, music — and the performance of Meena Kumari. She commands the screen and each frame pulsates with her grace, dialogues and hypnotic presence under the shadow of gloom. Sahibjaan has a public persona of fame, beauty and notoriety but at heart is pure and craves respectability. For the actress, it must be like playing out her life. Meena Kumari, through her poetry and self-education, insulated herself against her starry environment and frantically looked for love.

The movie was 14 years in the making and many scenes were shot when she was suffering from cirrhosis of the liver. She wanted to complete the movie as she had the premonition of death. On March 31, less than two months after the release of Pakeezah, Meena Kumari bid adieu to her audience — at the age of 38.

And ever the poet, she selected the epitaph of her tombstone:

Also read: The man behind 'Amar Akbar Anthony': The three characters India can't get over