Why ghazals owe their life to Mehdi Hassan

The legend’s voice is so immortal that it will continue to hypnotise the collective consciousness of the connoisseurs and the masses forever.

He was to the manor born! Sitting majestically cross-legged on the dais, with a receding hairline, an obligatory mullet, and a pencil-line moustache, he surveyed the audience, which had packed the hall to the rafters. Placing his fingers on the harmonium in front, he sang his first note. It was low, deep, pitch-perfect, dripping with honey, the most dulcet song of a bird, impossibly beautiful. It was surreal! 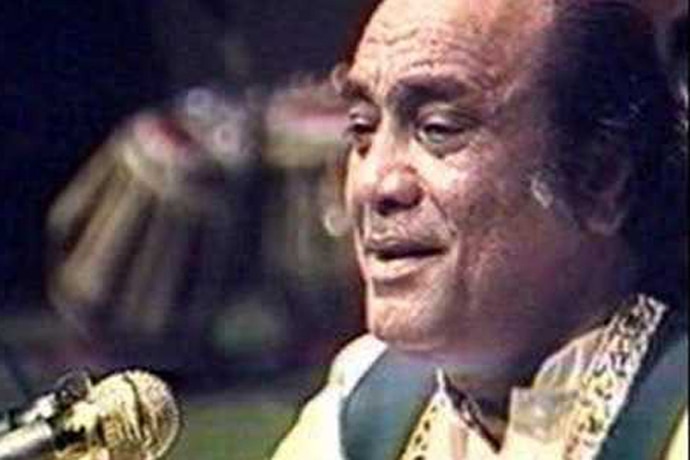 The year was 1977. On the occasion of the centenary celebrations of Muhammad Iqbal, the Pakistan High Commission had organised a music concert at FICCI Auditorium, New Delhi. And who better to musically convey Allama’s vision than Mehdi Hassan himself! This was his first visit to India, but there would be countless visits thereafter with sold-out concerts.

I grew up listening to Mehdi on Radio Pakistan in the late '60s and early '70s. Living in a border state, the radio reception was crystal clear. He was the reigning monarch of the Pakistani film playback industry and his film songs held me in thrall. Of course, there were other playback singers as well – Ahmed Rushdi, Masood Rana, Mujib Alam – but Mehdi was leagues ahead.

Many songs that he later sang in concerts in India and elsewhere were film songs which he elaborated on or “ghazalized” – slowing the tempo, introducing classical touches and embellishments, adding more stanzas – songs such as "Duniya kisi ke pyaar mein", "Mujhe tum nazar se", "Rafta rafta", "Ranjish hi sahi" (which I recall coming first for several weeks in the famous count-down show Shezan Hit Parade). In the song "Ab ke hum bichhde", he changed the tune!

Apart from the film songs, he also created many ghazals in his own music and it was through these ghazals that Mehdi Hassan became hugely famous outside Pakistan. He had a repertoire of hundreds of ghazals and countless songs in many languages.

I attended several concerts of his and met him many times. I was amazed at the sheer excellence at which he continued to sing decade after decade. The out-of-this-world musical chastity and the ability to emotionally overwhelm the listeners continued unabated throughout his singing years, earning him a fanatic fan following and respect of peers.

What made Mehdi unique? What made him a musical species in his own right?

Even though Mehdi was a great classical singer with ability to render any classical raga with all its emotions and nuances, he chose the lighter version, the ghazal, as his signature form of music. He effortlessly expressed the many dimensions of classical music through the ghazal. No other ghazal singer could match the soft touch, the nuances, the poetic flourish, the bubbling emotions, the magical silences that Mehdi delineated in his renderings. His rendering was totally innocent of pyrotechnics or exaggerated emotions or artificial pretensions. He was simply a total ghazal singer. Mehdi raised ghazal singing, once looked down upon as the art of high class courtesans, to the level of khayal and dhrupad singing and won for it popular respect and appreciation. He widened the horizons of ghazal gayeki immeasurably, augmented its ambit and enriched its landscape.

What imparted timeless appeal to Mehdi’s ghazals was that he based his renditions on different ragas which were selected in accordance with the moods of the verse. Thus Mehdi the composer worked in tandem with Mehdi the singer. What was no less remarkable was that two songs based on the same raga invariably sounded different. He brought a new sensitivity to vocal music, to the utterance of the language.

In a concert I attended at the residence of the Pakistani High Commissioner, Mehdi went out of his way to explain the nazaakat of the ghazals he was singing. His velvety, mellow baritone redolent of pathos coupled with his relaxed and poised style of rendition under a full moon created an indescribable magical evening for the listeners. That’s what made Mehdi, the Shahenshah of Ghazals.

He wasn't always going to be king of this poetic form. Born in 1927 to a clan of minstrels in village Luna in Rajasthan, Mehdi was initially expected to become, like his father and uncle, a singer of dhrupad – the form of singing that grew out of devotional chants in the temples. His forefathers had been court musicians for 12 generations. Mehdi began to perform as a vocalist at the age of eight. In 1947, when Hassan was 20, the family migrated to Pakistan. Mehdi worked as an assistant in a cycle repair shop to support his family. Later, he found work as an assistant in a workshop repairing cars and tractors. But even in such dire times, he did not give up his riyaaz. Later he left for Lahore, to Radio Pakistan, looking for opportunities but none came his way. In Karachi, the center of Urdu films, he was able to secure a few singing assignments. The first song was "Nazar milte hi dil ki baat ka labon par charcha na ho jaye" in the film "Shikar". Initially, he found it tough competing with great playback singers of those days. However, after the song "Jis ne mere dil ko dard diya" in the film "Sasural" in 1962, there was no stopping Mehdi and he ruled the air waves for two decades. Towards the end of 1990s, chest and lung problems caused Mehdi to retire from performing live. Playback singing he had given up much earlier.

In spite of his health problems, Mehdi composed and sang a song with Lata, fulfilling her long time wish! Lata had been quoted as saying that God spoke through Mehdi’s throat. He sang and recorded his portion of the song in Pakistan and sent the tape to Lata. The song "Tera Milna Bahut Achha Lage Hai" was released in 2011 in the album "Sarhadein".

It has been three years since Mehdi - the kesariya balam - left for his new home on June 13. Soft voices, when music dies, continue to vibrate in memory. Hassan’s voice is so immortal that it will continue to hypnotise the collective consciousness of the connoisseurs and the masses forever.

In 1957 he had sung "Teri har ek ghazal qaabil-e-daad hai/ Par meri aawaaz mein bhi kuchh baat hai". Mehdi sang it prophetically, knowing that one day his voice would rule over the hearts of the listeners.

#Pakistan, #Ghazals, #Mehdi Hassan
The views and opinions expressed in this article are those of the authors and do not necessarily reflect the official policy or position of DailyO.in or the India Today Group. The writers are solely responsible for any claims arising out of the contents of this article.