Priyanka Chopra at the Met Gala: PeeCee causes shockwaves, but hey trolls, this is cutting-edge fashion, not your local shaadi!

Clearly, those trolling the fearless Priyanka Chopra know zero about the Met Gala. Or fashion!

Exclusivity, extravagance and exaggeration make the Met Gala the experience it is — setting it apart from all other balls or international award shows, making it the world's biggest fashion event!

'Outrageous' is normal in Met-land — and showing up in a sleek satin gown is simply an insult.

Yet, however bizarre an outfit might appear, it is always tied together with a theme — and this year's theme for the Met Gala is Camp: Notes on Fashion, to coincide with an upcoming exhibition at the Met, inspired by photographer Susan Sontag's 1964 essay 'Notes on Camp'. Making the Met so Gala! PeeCee looks stunning, if you ask us. Nick is not bad, either. (Source: Reuters)

And while all that is happening in New York, a large section of social media crusaders seem to have joined forces to troll our very own Priyanka Chopra.

If you're feeling a sense of déjà vu, you're not wrong. This isn't the first time PeeCee got trolled for her Met Gala outfit. And I promise you, it isn't the last time either.

This year, Priyanka showed up with husband Nick Jonas — incidentally, they are said to have first met at the Met Gala in 2017. While PeeCee opted for an OTT outfit with a metallic corset design along with a feathered and embellished mesh skirt with a thigh-high slit, Nick went with a white suit and heavily kohl-ed eyes. PeeCee finished off her outfit with an Afro hairdo that had a gravity-defying crown element. The couple even matched their shoes — silver glittery stilettos and Oxfords.

A sexist remark. Nice. Obviously no one has ever thought about being sexist to a woman — genius!

That's meant as a compliment to Lasith Malinga, right? Cuz if it's not, we can't even!

But PeeCee doesn't give a damn!

Remember her trenchcoat dress or the maroon velvet gown with the headgear? Naah, she's immune to the words of faceless trolls who neither understand what the Met Gala stands for, or what fashion — beyond shaadi ka lehengas — is! 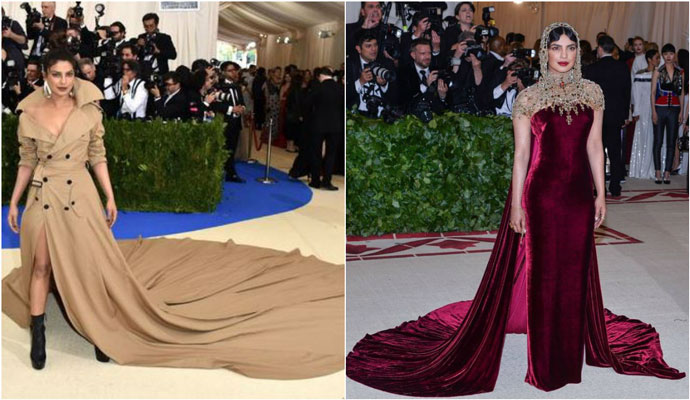 And that makes Priyanka fearless.

Fearless enough to experiment and try whacky stuff, while other Indian celebs, like Deepika Padukone, have stuck to comfortable — this isn't meant as an insult, but is coming from a place of disappointment to see Dippy just not experiment enough.

Deepika showed up in a pink gown — off-shoulder corset design and silver embellishments, complete with a high pony. Agreed that this is riskier than Dippy's previous outings — except the fuschia pink feathered gown — but still not enough to grab any eyeballs. Sorry, Dippy — PeeCee, on the other hand, is right up there alongside Lady Gaga and her 4-in-one outfit, Michael Urie's man and woman outfit, Harry Styles's sheer black top and high-waisted trousers, Katy Perry's chandelier dress and Jared Leto's two-headed ensemble.

And for that, thank you Priyanka Chopra.

Thank you for not holding back!

Thank you for showing the Met Gala that a desi girl need not be the predictable same old — she can have a wild edge. And how!

Also read: 'Chashni' vs 'Hook Up': Which is the better song?

#Online trolling, #Twitter Trolls, #Nick jonas, #Met Gala
The views and opinions expressed in this article are those of the authors and do not necessarily reflect the official policy or position of DailyO.in or the India Today Group. The writers are solely responsible for any claims arising out of the contents of this article.