What happened to the Mughals after the fall of the Mughal Empire?

An intense curiosity led me to research on the life of the dynasty after the British took over Delhi on September 14, 1857.

We read and commemorate the heroes who gave their lives in the first war of Indian Independence, every year on their death anniversaries. But spare a thought for those who lived and lived a life worse than death.

Ahmed Ali in his book Twilight in Delhi describes the Delhi Darbar held in 1911 to celebrate the coronation of King George V a few months earlier.

The British Emperor and his wife Queen Mary left the Red Fort, as the Qila-e-Mubarak, was called by the British in a state procession. Almost every prince and ruler and notable attended it and presented tribute to King George V.

In the background as this princely convoy is moving a beggar known as Bahadur Shah is dragging himself on useless legs, begging on the streets of Shahjahanabad.

Who was this beggar? Why was he named Bahadur Shah?

An intense curiosity led me to research on the life of the Mughals after the fall of Delhi into the hands of the British on September 14, 1857.

Though hardly any English book bar Ahmed Ali's describes the remaining Mughals, Urdu books of late 19th and early 20th century are full of it.

Ghalib himself describes it in two of his works, Dastanbu and the other is Roznamcha-e-Ghadar. Even though Ghalib was not critical of the British and hoped for their patronage and a pension, he still portrays the desolation of Shahjahanabad.

The major description of the plight of the innocents is found in Khwaja Hasan Nizami's Begmaat ke Aansu, Zahir Dehalvi's Dastan-e-Ghadar, Mirza Ahmad Akhtar's Sawaneh Dehli, Syed Wazir Hasan Dehlvi's Dilli ka Aakhiri Deedar and from Fughan-e-Dehli or the dirges written by many Urdu poets on the condition of royals left in Delhi.

The prince found begging on the streets of Delhi in 1911 finds mention in Khwaja Hasan Nizami's (1873 - July 31, 1955) Begmaat ke Aansoo. His name was Mirza Nasir-ul Mulk and after escaping the British wrath in the immediate aftermath of the Uprising he had taken up employment along with his sister in a merchant's house in Shahjahanabad. 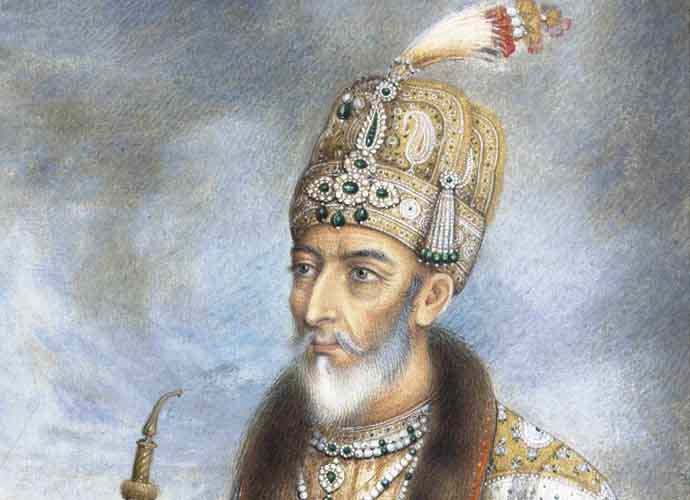 Later when the British government fixed a pension of Rs5/pm for the Mughal prince and princesses he had stopped working. Soon the pension was squandered away and he was in debt.

After a few years later a peer baba, who looked as if he was from the Timurid-Chengezi lineage used to drag himself around Chitli Qabr and Kamra Bangash area. His legs had been struck by paralysis. He had a bag tied around his neck and he would look at passersby mutely to ask for help. Those who knew who he was would throw in a few coins in his bag.

Someone asked who he was and was told that his name is Mirza Nasir-ul-Mulk and he is the grandson of Bahadur Shah.

Another prince, son of Bahadur Shah Zafar's daughter Quraishia Begum was also begging on the streets of Shahjahanabad.

Known once as Sahib-e-Alam Mirza Qamar Sultan Bahadur, after the British took control of Delhi he was reduced to begging.

He would come out only at nights as he felt ashamed and embarrassed to be begging on the roads where people bent low to salute him when he rode in the streets.

Mirza Qamar Sultan asked for alms with an aristocratic air. He doesn't address anyone just cried out, "Ya Allah please get me enough that I can buy provisions for myself."

Khwaja Hasan Nizami wrote innumerable books on the events of 1857, all based on eyewitness accounts of survivors. One story which I found particularly moving was the story of the daughters of Mirza Kavaish who had been appointed the Heir Apparent of Bahadur Shah Zafar by the British overturning the claims of Mirza Jawan Bakht, the son of Bahadur Shah Zafar's favourite wife Begum Zeenat Mahal.

In Begmaat ke Aansoo, Khwaja Hasan Nizami has described the story, which he heard from the princess herself.

Her name was Sultan Bano and she was the daughter of Mirza Kavaish Bahadur. When she met Khwaja Hasan Nizami she was 66-years-old but still remembered everything vividly. He recorded it in Begmaat ke Aansoo as Shahzadi ki Bipta.

She tells her story to Khwaja Hasan Nizami:

Although the ghadar took place 50 years ago I still remember it as clearly as if it was yesterday. I was 16-years-old then. I was two years younger than my brother Mirza Yavar Shah and six years older than my sister Naaz Bano, who died.

My name is Sultan Bano. My father Mirza Kavaish Bahadur (he was appointed the Crown Prince by the British in 1856, over the claims of Zeenat Mahal's son Mirza Jawan Bakht). He was a favorite and able son of Hazrat Bahadur Shah.

We sisters were very fond of our brother Yawar Shah and it was reciprocated fully.

Aqa Bhai had a whole range of tutors who taught him every range of subject and various arts. He had expert calligraphers, Arabic and Persian scholars and ace archers teaching him.

We learnt embroidery, stitching and other household arts from Mughlanis.

We didn't observe purdah then or now. Strangers would come and go from the zenana mahal without a problem. But I was shy and I always kept my head covered and didn't like coming in front of strange men. But I had to obey the orders of the Huzur, even though various male cousins also came there.

The saving grace for me was that because they were in the presence of the Emperor they all kept their gaze lowered. No one could look up or speak out of turn.

As per custom, Huzur-e-Moalla would offer a morsel from some special dish to a few of his children, that person whether young or old, male or female, would get up from their seat and go close to him and present three salams by bending from the waist. 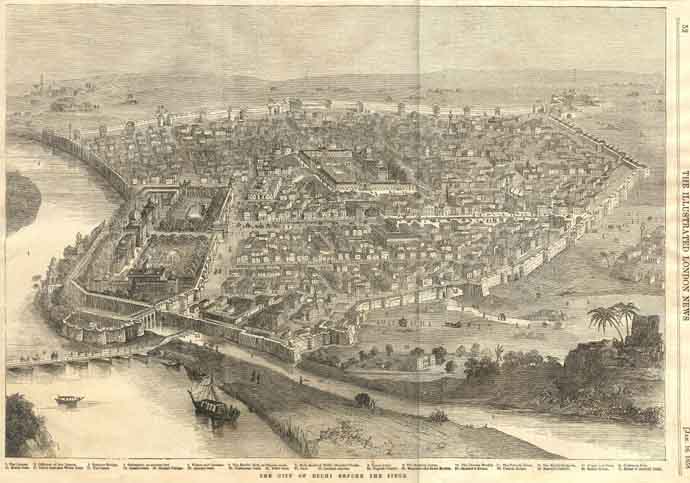 One day I was called and Huzur gave me a portion of a special Irani dish that had been mde that day. He said, "Sultana, you only peck at your food. It's good to be respectful but you should not go to the extent that you get up hungry from the dastarkhwan."

I presented three salams to him but only I know how I went there and came back. I was quaking and tripping over my feet.

Alas! Where did those happy days go? What happened to that era?

We would be roaming about in our palaces without a concern. Zill-e-Subhani's shadow was on our head and we were addressed as Malika-e-Alam. Such are the ups and downs of life.

I remember the day clearly when Huzur-e-Moalla was arrested in Humayun's maqbara and a gora shot my Chachajaan Mirza Abu Bakr Bahadur then Mirza Sohrab ran towards him with a naked sword. But he was shot by another gora and he fell down with an aah on chahchajaan's corpse and died. I was standing there, still as a statue watching it mutely.

A khwaja Sara came and said, "Begum why are you standing here? Your Abbajaan is calling you."

In a state of stupor I followed him.

Near the river gate, my father, Mirza Kavaish Bahadur was seated on a horse, bare headed and anxious. Abbajan's hair was covered in dust and straw. He started crying when he saw me and said, "Farewell Sultana, I too am leaving. The light of my life, my young son, who I wanted to see with a sehra of pearls and flowers hiding his face in his wedding, was killed in front of my eyes by a Sikh soldier. " I screamed loudly and started calling out, "O my brother Yawar."

He dismounted and pacified naaz Bano and me and said, "Beti, now the goras are looking for me. I don't know how much longer I can escape them or how much longer I have before my life is snuffed out. You are Masha Allah young and sensible pacify your younger sister and place your trust in God and be patient.

"I don't know what will happen to either of us. I don't want to leave you both alone but one day or the other you will be orphaned. Naaz Bano is a child, look after her and live a righteous life.

"Naaz Bano you are no longer a princess don't throw tantrums or make demands. Just give thanks to Allah and eat whatever you can get. If someone is eating, don't look at them or people will say Princesses are very greedy."

He put us in charge of the Khwaja Sara and said, "Take them to where the other members of our family have gone."

He embraced us and spurred his horse into the jungle. That was the last we saw of him and have no idea what happened to him after that. The Khwaja Sara was an old servant of our family and he set of with us. Naaz Bano walked for a little while but she had never walked in her pampered and protected life and soon her legs gave way.

She started crying. I had never walked much myself but somehow I managed and pulling Bano along stumbled my way through the streets where we once rode elephants in state processions.

A thorn pricked Naaz Bano's foot and she fell down crying. I picked her up and tried to remove the thorn. The accursed Khwaja Sara kept watching, making no effort to help. He started pushing us to hurry up.

Naaz said, "Apajan I can't walk anymore. Please ask the steward to send a palanquin for us."

I started pacifying her through my tears. My heart felt as if it would burst with sorrow.

Naaz Bano was high-spirited and was used to obeisance from servants and would always keep them in their place. She scolded the Khwaja Sara. The accursed man flew into a rage and slapped the poor orphaned princess.

Bano trembled with shock. No one had ever laid a hand on her. Even I started crying along with her. The Khwaja Sara walked off leaving the two of us crying there.

Somehow the two of us stumbled our way to the dargah of Hazrat Nizamuddin Auliya rahmatallah alaihe.

Thousands of people from Delhi and our family had taken refuge here. Each was caught up in their own troubles and fears. No one was talking to the other or enquiring after them.

A wave of epidemic diseases, which spread in the wake of the ghadar, claimed my sister's life.

I was now all-alone.

Though peace returned to Delhi, there was no peace for me.

The British govt fixed a pension of Rs 5/pm for all of us and I still get that.

#Bahadur Shah Zafar, #History, #Mughals
The views and opinions expressed in this article are those of the authors and do not necessarily reflect the official policy or position of DailyO.in or the India Today Group. The writers are solely responsible for any claims arising out of the contents of this article.