The ill-fated day changed the very face and contours of the hill station.

I grew up in Nainital, with my grandmother and an assortment of aunts. The idyllic hill station of the '60s is imprinted indelibly in my memories, a childhood romance I have never quite got over.

It's not all illuminated with sunshine memories. My recollections are associated, usually, with the sound of rain beating down on the tin roof and the leaks that sprung up as regular surprises from the wooden rafters.

My memories are of gum boots, and of bloodsucking leeches that would loop and arch across grass and pebbles to attach themselves to unsuspecting ankles. I remember the "gadheras", the stone-stepped water channels painstakingly constructed vertically across the steep hills, wherein torrents of shimmering rain water would gush into the lake.

I remember the multicoloured umbrellas that would map the grey monsoon palette of mist, fog and rain. I have never forgotten the soft kisses of shining raindrops as they settled on my nose, my hair, with the assurance and intimacy of old friends.

My new novel, Things to Leave Behind, is set in Kumaon, in Nainital and Almora and Sat tal, in the years 1842 to approximately 1912. The novel is "about" many things, colonialism and history and a first fragile modernity in a society steeped in tradition.

At the heart of it is a tangled love quadrangle, and a painting, and the indomitable spirit of pahari women. The main protagonist, however, is Kumaon, in its history, people and landscape, the Kumaon where I grew up and which I continue to inhabit through my books and dreams.

Today is September 16, an important date in the annals of my hometown. It was on September 16, 1880, 136 years ago, that the great landslide devastated the pristine landscape and altered the very face and contours of Nainital.

Here is a photograph, and some passages from Things to Leave Behind, that give a sense of it. (No spoilers though!) 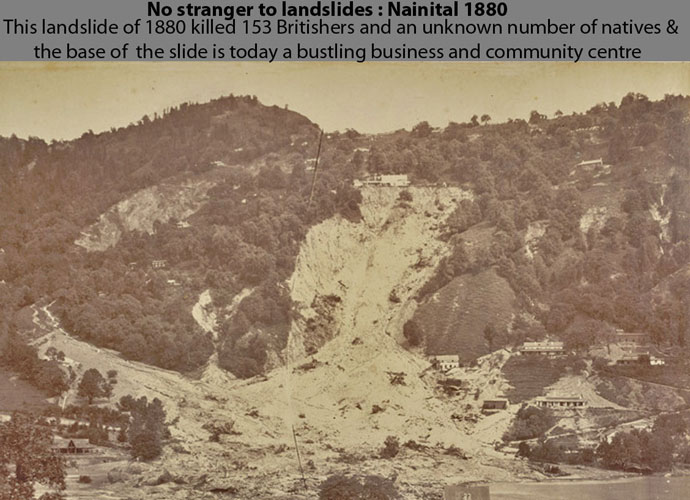 On that fateful day of September the 16th, 1880, a Wednesday, the heavens opened over Naineetal. It rained without stop for four days and nights, although the skies were so dark that it seemed always only night. There was incessant thunder and lightning, so much so that the inhabitants of Naineetal became used to it and, some would say, even missed it when the sky and earth were momentarily silent again.

In Tallital, in the Burra Bazaar house, government pleader Devi Dutt Pant lay ill in bed. The wooden shutters were closed against the rain, as they had been the week of Badri Dutt Uprety’s execution. He was delirious with fever, and his thoughts wandered from the present to the past, sometimes to the future.

He dreamt of his sister Durga Devi, who had drowned in the lake, and her daughter, Tillotama, and the child Deoki, whom he had never held. His exhausted consciousness puzzled over the details. There was something odd about Tillie - he fancied she was sitting beside an emerald lake, wearing a man’s coat.

The family priest had braved the storm to come to the house in Burra Bazaar, where he had conducted so many auspicious prayers. He consulted the panchang. After studying the almanac, he drew a planetary chart in his tattered notebook. It was the month of Bhadrapad, Vikram Samvat 1936. "The stars decree that his work in this birth life is over. His time has come. Hari ichhabalwan," he announced sorrowfully.

Outside, the storm continued. It was on the 19th of September, a Saturday, that the first slip occurred; 33 inches of rain had been recorded when the steep facade of Cheena Hill, covered with ancient deodar trees and boulders as large as houses, came tumbling down towards the lake. Fearing precisely such a situation, the commissioner, Henry Ramsay, had already evacuated the households that lay in that direction.

The Victoria Hotel was carried away in a torrent of mud and stone, and 151 people were killed in the Assembly Hall area by the lake. Then there was another rumble and a flash of lightning combined with the longest, loudest thunder anyone could ever remember hearing.

The lake was calling to the mountains, and now it was Bells Department Store that fell under the force of stone and boulder. Those trying to extricate those who were trapped, were pulled along with the debris, as rolls of fabric and haberdashery hurtled down with them: fruit bowls and neckties, cravats and silk cushions, all accompanying them to the bottom of the lake as comfort for the next life.

Near the lake shore on the Mallital end, next to the horse stables, an old, wizened crone lived in a small stone hut. She earned a living serving tea and tikonas to the syces who handled the horses. Nobody knew if she was Hindoo or Mohammedan, or if she was indeed even human. She lived there with her young grandson, whom she had many hopes for.

The rain had been streaming down forever, but she had kept the embers alive in the small, square fire-pot with iron handles and grill. She was blowing into the reluctant flames with a rusted iron flue pipe. When she stopped midway, tilting her head slightly, it was as though she was listening to the mountains.

"What are the mountains saying, Ama?" her grandson asked. He held the belief that his grandmother knew everything.

She gave him a long, lingering look of immense tenderness. "They are saying, my son, that you must leave me now and run to Tallital, where your uncle lives. Never mind the rain, the mud, the dark: the lightning will illuminate the way, and the thunder rattles to warn you of what must be."

So, unquestioningly, he left. Then the earth shook, as though in ecstasy, and the ancient trees and boulders as large as houses came hurtling down, the trees that the sages Atri, Pulaha and Pulastya had planted thousands of years ago when they first conjured up the waters of Manasarovar in the Gandhamdama Mountains.

The boulders fell crashing towards the lake, borne along in slurries of warm mud, carrying with them all that they met on the way. The fire in the old woman’s gunny and wood hut was extinguished. In the dark, she could hear the horses whinnying and rearing in panic.

The topography of Naineetal changed overnight. The temple of Naina Devi, where the eyes of Sati had fallen after Vishnu had interrupted her husband Shiva’s frenzied dance, was submerged in a mess of boulders, mud, rocks, trees and flesh. Seventeen horses were trapped in the debris. The old woman who had heard the mountain speak was silent forever.

(Namita Gokhale's novel Things To Leave Behind, set in Kumaon in the years 1840 to 1912, will be published by Penguin Random House India this November.)

Post your comment
#Kumaon, #LandSlide, #Nainital
The views and opinions expressed in this article are those of the authors and do not necessarily reflect the official policy or position of DailyO.in or the India Today Group. The writers are solely responsible for any claims arising out of the contents of this article.