#NepalPhotoProject: Memories of a Himalayan tragedy we deserve to see

The phenomenal art works follow the impact of the 2015 earthquake.

In the plethora of selfies of girls who forgot how to smile, meals that make you curse yourkitchen and handles like @therichkidsoftehran, there are, somewhere in the mix, a few Instagram accounts held by the do-gooders of the world. If you're an avid user from this subcontinent, chances are you've come across one such account.

The Nepal Photo Project was created by photographer Sumit Dayal exactly one year ago on the day the first earthquake hit Nepal. He recalls vividly how he was at Delhi's Nehru Place with his partner Tara Bedi when they felt the tremors in the Indian capital. Sumit's parents live in Kathmandu.

Standing on the first floor of their Kathmandu home Sumit's mother could not find a stable spot to place her foot, and falling on the swaying floor, had to crawl down to the ground floor and then out to a field near the house. Sumit's father was at his store in the basement of a local hotel, attempting to rush out and home. He later told Sumit how he watched the entire city unravel in aftershocks. More surreal than hearing about his parents' experience or fearing palpably for their lives, was the experience Sumit had getting home himself. Currently, the project is part of an exhibition by photography quarterly PIX, at the Goethe Institute, Delhi.

He tried booking a regular flight, then tried flying in with the Indian Army. Finally, on the 26th, he flew Delhi-Kathmandu on a journalists' flight. The Spice Jet charter plane took off in the morning and was poised to land when the first massive aftershock hit Nepal. The plane retuned to Delhi. Late that night, it took off for a second time. When Sumit finally exited Kathmandu airport he says the scene was "post apocalyptic". "We paid 3,000 rupees per person for a shared taxi into what was essentially a ghost town. There were bodies strewn everywhere, people were sleeping in the streets and fields." 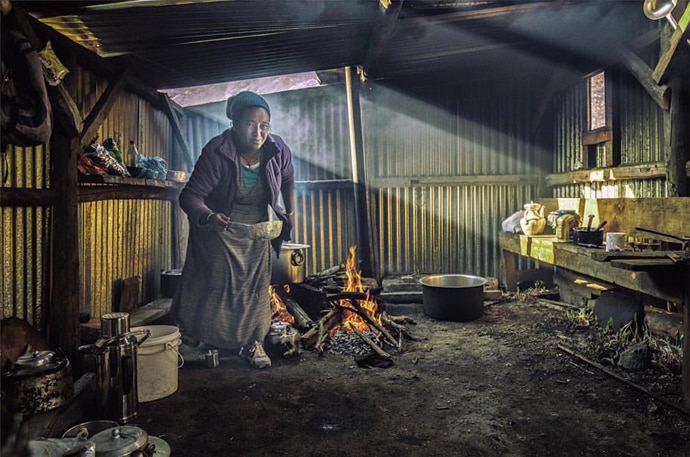 Nepal Photo Project captures the aftermath of the Himalayan tragedy.

Sumit says with certainty this was the "weirdest, strangest thing" he's ever seen. Coming from a man who covered Afghanistan in 2007, this is chilling.

In the long hours between the first earthquake hitting on the 25th and Sumit reaching Kathmandu the next day, he tried repeatedly to access information from Nepal. "There was no reliable news," he says. "There were no international journalists there yet, lines were down and all I got were a few random photos which people would upload when they had five minutes connectivity." With growing frustration he wished people had given more information.

"I kept asking, 'Where is this?'" Sumit began an online conversation with friends in Kathmandu requesting data with every photo upload, saying simply, "People need to know".

While Sumit spent his first few days home running in and out of his house in a city where the earth wouldn't stop moving, in Delhi, Tara Bedi began posting to the Instagram feed. Sumit had set the stage, putting in place the parameters of what made a photo eligible for upload. It wasn't based on popularity, "likes" or number of followers, but on information. "Yes, the visual had to convey something," Tara says, "but what we were really looking at were the captions." A photo had to let people know who/ what/ when/ how or why. "If I came across a very strong visual that lacked information, I would message the person to ask them for it."

Initially Tara was posting images from the six photographers Sumit had touched base with in Kathmandu, but within a week people caught on to the hashtag #nepalphotoproject. Indian journalists began using it, and Tara and Sumit credit their already successful @indiaphotoproject account with helping them promote #nepalphotoproject. "The hashtag allowed us a collective view of what was going on all over Nepal," Tara who till recently worked in the film and multimedia production space says as she explains her feed-selection process.

If Sumit is the architect who drew up the blueprints, and Tara the curator or contractor of the project, the people who have "built" it, are endless. The pair takes very little credit for how large and fast the project grew, thanking instead Kathmandu photography platform Photo Circle (run by Nayantara Gurung Kakshapati and Bhushan Shilpakar), and international aid workers, saying simply that, "In the aftermath, people felt the need to document…it came intuitively."

The stories that have come out of the Nepal Photo Project effort are undeniably, incredible. As I write this a year after the tragedy, the Instagramaccount is still 68k followers strong. All those people though, if mobilized, add up to a citizen journalism movement. A photo Sumit took of a man carrying his wife to hospital, with a caption detailing his struggle in getting there with only a thousand rupees, generated 50,000 rupees in donations in a single day. Another time Sumit posted a picture of a village mentioning they needed tents. A woman immediately wrote in asking for his GPS location and three days later, miraculously tents arrived. Nepal Photo Project began connecting humans.

When Photo Circle photographer Sagar Chhetri posted a picture of a girl with a broken leg he didn't expect someone to write in asking to sponsor the girl's surgery and post-op care. But it happened, and it continued to happen. "People kept asking us, 'how can we help?'" Tara says, "and through the feed, our Facebook page and website, we could help them with volunteering, donations, or simply how to send and track information." They've also used some of the donations to provide five small grants to individual photographers so they may continue documenting the rebuilding process - something most of the media forgets.

One year on, Sumit and Tara sit back and take stock of everything. Five years ago Sumit pondered over how different his trip to and coverage of Afghanistan might have been with an iphone and the Instagram app. (This was preInstagramfor androids.) Today with his sometimes 100k followers, I ask him about switching mostly to a phone camera as his premier medium. "I didn't find switching technologies that drastically different," he begins, "but what's crazy is that the whole process of capturing has come down to three buttons. You capture, add filter and share…"He continues, stunned by the simplicity of it: "It's taken photography all these years to reach here…each one of those three buttons has sixty years of photography history behind it. Essentially, printing and sharing are now the same thing."

As expected from an "old school" photographer, he says he initially hated it and frequently deleted his account. "I spent 10 years learning this craft and found it all came down to a button on a phone. It democratized the process…all of a sudden we were on level grounds. Me trying to perfect my craft didn't matter when a 16 year old in Karachi was doing the same thing but better." Sumit decided at that point to ride the wave rather than go under trying to fight it. Today he no longer wants to be the lone photographer. "My role as a photographer who generates content is over; I'm more interested in human visual communication. I like collecting and filtering information and I'm interested in seeing what happens when you can view multiple perspectives of the same thing - I believe that is the future of journalism. I think the very DNA of something going viral is that it must have no sense of ownership." He's right. Because that way, the thought belongs to everyone.

Nepal Photo Project is the best representation of those thoughts and was even cited as an example of modern reporting by Instagram co-founder Mike Krieger. But where does it go from here? Currently, the project is part of an exhibition by photography quarterly PIX, at the Goethe Institute, Delhi. Their phenomenal installation lies in a small corridor, tucked away from the other artworks. How do you translate almost a thousand images - each one relevant - onto a 13-foot wall?

In order to show the quantum of exchange of information that went into this huge mobilising machine of a project, Sumit created a sort of grid. Imagine a chart that displays chronology horizontally, starting with the day of the earthquake and thence forth charting dates with the strongest aftershocks. Now imagine it vertically charting the Richter scale impact of the shocks on each of these dates. Then imagine that impact measured in small, square, Instagram images from the feed (1 image per point on the Richter scale) and you'll have some idea as to how this installation compacts vast information to give an audience some semblance of the speed, width and impact of the project.

Do they plan to take this to other cities? "If we get the funding," is their answer. Two years into passion projects (Nepal Photo project, India Photo Project, Delhi Photo Festival) that no sponsor offers to pay them a salary to continue running, Tara and Sumit both find their bank accounts worn thin, and if it weren't for the Alkazi Foundation and the Goethe Institute, even sharing the work as physical art would be out of the question.

The grounding truth is though, that this art deserves to be seen. Though Instagram isn't quite as snappy as snapchat, it does contain the same sense of here today gone tomorrow. Rarely other than while stalking one's lover does one scroll all the way down someone's profile. So to create something lasting out of an ever-running feed, and for it to defy the flippant transience that defines social media today, and manifest physically, is not simply impressive, it is unprecedented.

#Kathmandu, #Nepal Earthquake, #Nepal Photo Project
The views and opinions expressed in this article are those of the authors and do not necessarily reflect the official policy or position of DailyO.in or the India Today Group. The writers are solely responsible for any claims arising out of the contents of this article.

Writer and TV presenter. She lives and works out of New Delhi and writes on travel, lifestyle and women's issues. She blogs at inkimageideology.blogspot.com.