Netflix’s Maniac: In an eerie, quixotic tale of mental illness, a message of hope

The show has two important messages — that cure lies in human connections, and that there is no shortcut for it.

When Cervantes wrote what is considered the most modern novel of all time, Don Quixote (1615), he had confessed Quixote’s insanity right at the onset of his work. The scene where Quixote perceives windmills as gigantic monsters is a case in point; though later on, it becomes clearer to the reader that the author shuffles Quixote’s characterisation from sane to insane, thereby creating a highly intellectual muddle. Is it madness or is it a performance of the same? Somewhat similar was my confusion in Cary Fukunaga’s newly released Netflix show, Maniac. Its characters reference Cervantes’ book at several parts in the story; it holds the key to understanding much of their lonely cerebral journey. Starring some excellent actors like Emma Stone, Justin Theroux and Jonah Hill, Maniac is that “trip” which everyone is sorting out (in their heads) right now. It has left most of us confused, a little dizzy, but we are not surprised anymore...not quite.

I believe this is partially because dystopian dramas, a technologically perfect future, and the depiction of loneliness in them do not leave us startled these days. One of Black Mirror’s most powerful episodes, ‘Hang the DJ’, showed us the battle between loneliness and technology in a way that didn’t seem that far away in the future. The invasive apps are already in place, many of us are afraid to face the end of relationships — basically the existential idea that love, too, can be uncertain, and not turn out exactly the way we had figured out. In the hope that technology will relieve us from the excruciating pain, we sign in as docile subjects. 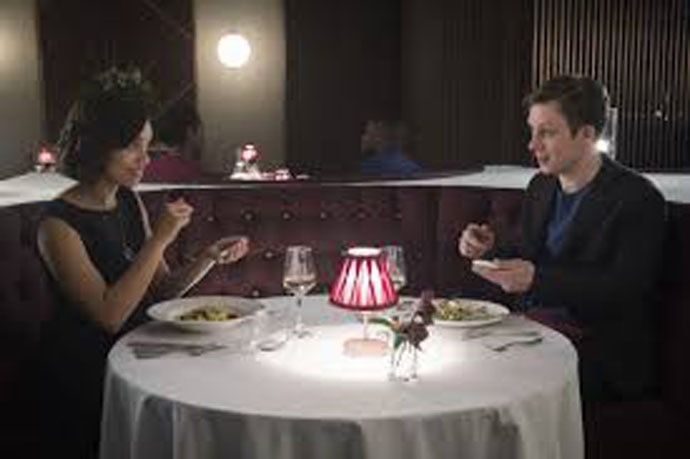 The dark battle between loneliness and technology that Black Mirror's 'Hang the DJ' showed us no longer seems impossible. (Photo: YouTube/screengrab)

Now, in Maniac, there’s an even scarier leap from here — Annie (Emma Stone) wants to have a taste of pain, even derive pleasure from it, every time. She had lost her sister in a traumatic car crash; and, eventually she says that drugs are the only way she gets to be with her sister. This leads her to a trap of psychotropic addiction and a constant desire to escape/withdraw from reality.

Another lead character played by Jonah Hill, who goes by the name of Owen Milgrim, is struggling with paranoid schizophrenia. His illness, that his family doesn’t very well fathom, has distanced him. Further, they perceive him to be a soft threat on a sexual harassment issue involving his brother, which the entire family wants to keep under wraps as it is a matter of their ‘honour’.

While Annie is seen reading Don Quixote from time to time, Owen is playing with the beguiling Rubik’s cube — both can be interpreted as methods of dealing with loneliness. Along with other patients, they both sign up for a pharmaceutical drug trial to help them tackle their traumas, solitude and insecurities. The highly professional centre is run by a cyber depressed computer called GRTA. Collectively, their professionals (one, a chain-smoker who sleeps in a drawer and the other with a comic face) claim, “The mind can be solved and pain can be destroyed”.

How exactly is that possible? By the ingestion of three drugs — A, B, C — but nothing is as simple as it appears. Owen misses the A pill deliberately, Annie has already had a taste of the pill, and the machines wreak havoc once they are overloaded with work. It is tough to trust either Dr. James Mantleray or Dr Muramuto after their ad of their brain-child.

Yet, one would guess that many are in need for a cure as they sign up for the drug trial.

Director Cary Fukunaga, when asked about the portrayal of medication for mental illness, has said, “I don’t want to be confused with being anti medication because pills save people’s lives. But I think there’s no quick and easy pill that can fix things permanently. And we question why we want to “fix” things and what is normal or acceptable in society. We want to challenge the stigma around mental illness.”

In challenging mental illness stigma, Maniac is far more ambitious than it appears — it alters its time frames, genres and aesthetic, mostly all at once. Someone unaware of the 1960s-1980s styles onscreen might get completely lost.

We are shown that the repressed traumas and painful memories of the patients expose some uncomfortable truths in the drug trial. There are also hallucination overlaps—Annie and Owen keep on finding each other in their fantasies. It only shows how human connection is way more important than family, technological bliss or conventional romances (think Friend Proxy’s proposal). Annie realises in her elf-avatar (another trip in the show) that there is no negotiation that shall bring her dead sister back and that she has to live with it. Owen moves an inch with his own mindscape and makes peace with the knowledge that his family shall never have his back. And also that being the black sheep of the family is alright. He envisions being a hawk (Annie, I’m a hawk) — maybe an extension of his free self, or maybe just another hallucination.

But what’s really remarkable is the show’s insistence that there are no short cuts to recovery.

This eventual message carries the subtle art of the show. It is dream-like and can be delusive too; there is no doubt about that. But, it portrays metaphorically (the seven year old lost dog, the hawk) that connection is where the cure lies.

Annie and Owen’s laughter in the end, Mizuno and Justin’s affirmation of how life began on earth as a result of endless connections, aptly reflect some optimism. It doesn’t confirm anything except, “We’ll get there one day”. Like an old friend of mine who is battling bipolar disorder would say, “Even this bit of hope can sometimes save your life”.

Maniac deserves praise for showing us some positivity at the end, however eerie and quixotic.

Also read: Little Things: Love, reality and chill in the time of Netflix

Post your comment
#Mental Illness, #World mental health day 2018, #Maniac, #Netflix
The views and opinions expressed in this article are those of the authors and do not necessarily reflect the official policy or position of DailyO.in or the India Today Group. The writers are solely responsible for any claims arising out of the contents of this article.