Fathers' Day, Fathers' Way: Why 'No Fathers in Kashmir' made me think not of politics but simply of my dad's love

A mother's love has been celebrated numerous times on screen. In comparison, we often don't notice the love, protection and care our fathers give us. In Kashmir, it can make a crucial difference.

Amidst election season, when actor Soni Razdan was promoting No Fathers in Kashmir, fellow actor Kangana Ranaut was busy launching a tirade against Razdan’s daughter, Alia Bhatt, on Bollywood's now-famous nepotism and insider games. Much of Razdan’s time was spent providing answers to the charges being made by the Ranaut sisters. Perhaps then, it is no surprise that the movie came, was little seen and conquered even less.

But nobody puts a movie directed by Oscar-nominated filmmaker Ashvin Kumar in a corner — and neither should you. No Fathers In Kashmir touches the usual issues associated with the Kashmir Valley — terrorism, the diverse complexities of the state, the fight for survival and the layers of fear — but also a lesser acknowledged fact.

That experiencing fatherhood there is a luxury. To an outsider, Kashmir swings between the two extremes — ‘paradise on earth’ or ‘terror haven’. But director Ashvin Kumar of Little Terrorist fame raises a pertinent question — how does one make a film about hope, when its very subject rouses emotions like hate, fear and vengeance?

He begins the story with two teenagers, Noor and Majid, both of whom bond over the absenteeism of a father in their growing years. Noor, a Kashmiri raised in Britain, seeks elusive closure by discovering the truth about her father in the Valley, while local boy Maji, who falls in love with her, decides to accompany her in this journey. The couple begins the quest armed only with the fact that their respective fathers and the local leader Arshid Lone (played by the director) were inseparable friends.

However, now only one of the trio has survived and the progeny of the slain two wished to uncover the truth about their dads.

Through their journey, the viewer gets a deeper glimpse into the grim life of the locals. From young men getting “picked up” by either the military or the militants to the discovery that their own fathers may have undergone something similar, to never, ever return home, the movie is a riveting watch.

No Fathers in Kashmir was not a film many watched in the theatres; even fewer people knew why this was in fact such an important movie.

I am no different.

Like the majority of my fellow citizens, I am aware of the conditions in Kashmir but again, like many of us, I too forget about the daily struggles of the local population. We all see the scenic beauty of the breathtaking Himalayas, but what we fail to realise is that somewhere in the mountains live little children that may have never even seen their father.

So, why is this so important? 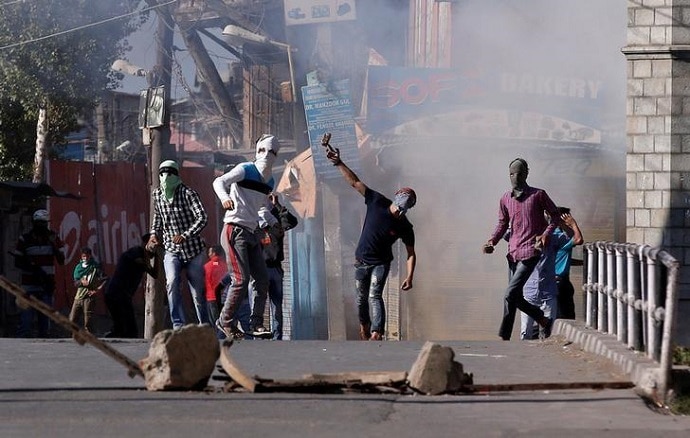 Always on the boil: Despite its breath-taking beauty, there is such a fragile peace in Kashmir. (Photo: Reuters)

Well, watching this movie made me, a simple college student, realise the deep importance of a father figure in a child’s life. After all, when you think about your own father, words such as 'strength', 'security', 'motivation' and 'love' run through your mind too. It would not be wrong to describe a paternal figure as a shelter upon us, one that protects us from every possible harm. He is also someone we look upto for inspiration, someone we idolise, adore and most of all, someone who tells us right from wrong.

A mother’s eternal love has been rightly portrayed on screen many a times. But it’s time to also recognise the invisible nurturing efforts of a father that often go unnoticed. The love our fathers give us may not be very dramatic or loud but without it, we may not end up being even half the people we are.

All its politics and artistic sub-texts aside, No Fathers in Kashmir simply made me feel grateful for the silent fatherly love that I am fortunate to receive and for that, I am one thankful viewer.

#Alia Bhatt, #Soni razdan, #No fathers in kashmir, #Father's Day
The views and opinions expressed in this article are those of the authors and do not necessarily reflect the official policy or position of DailyO.in or the India Today Group. The writers are solely responsible for any claims arising out of the contents of this article.

The author is an intern at DailyO