Not So Masoom: Why Shekhar Kapur's 'main bhi underprivileged' is just a cry for attention

At the age of 22, he became a chartered accountant with the Institute of Chartered Accountants in England and Wales. He was a Delhi-bred suave young man — he went to Modern School and studied economics at St Stephen's College. He was bright and his parents gave him every opportunity to let him shine.

This was back in the 1970s, where he, at his parents' behest, landed a high-paying job in England.

This was when most Indians could not even travel to England, forget about studying, living or working there.

But for Shekhar Kapur — the man mentioned above — none of that apparently counts as 'privilege'.

In 1975, Kapur debuted as a Bollywood actor with Jaan Hazir Hai. Though apparently his father always discouraged him from getting into films, the attraction towards the silver screen was too strong, and perhaps inevitable — after all, his uncle (mother’s brother) was the evergreen Dev Anand. Other films and TV shows followed and Kapur tasted success in bits and pieces.

So many people that ‘Knew’ wanted me to change the script of this film. People that were famous, experienced and ‘knowledgeable’. Told me it had no drama, no villain. I was naive unknown unskilled untrained. But rebellious. Thank God for that ! pic.twitter.com/Gb6Co3eOo1

The Naseeruddin Shah-Shabana Azmi starrer, an (unaccredited, as the Internet claims) adaptation of Eric Segal’s Man, Woman and Child, still remains one of the best films ever made in India. Kapur shot to fame and went on to give us more gems — Mr India to Bandit Queen, the list may be short, but it’s noteworthy nonetheless.

Almost 36 years later, Kapur shared a poster of Masoom and spoke about the struggles he faced — the unsolicited advice from people who “knew” and how the “unknown unskilled untrained but rebellious” him went ahead irrespective.

Clearly, it makes for a great story of grit and resilience — but hold on, what are you talking about?

Kapur is Dev Anand’s nephew, he was hardly an ‘outsider’ in Bollywood like, say, a Shah Rukh Khan who literally slept on Mumbai's beaches till he made it big. In contrast, Kapur had access to many stalwarts in the industry, whose advice he may deem unsolicited, but he had access nonetheless. His 'unskilled untrained-ness' never kept him out of work — even after he earned a reputation for abandoning projects midway.

In 1989, he exited the Sunny Deol, Anil Kapoor, Sridevi and Meenakshi Sheshadri-starrer Joshilaay abruptly. In 1992, he did the same with Barsaat — Bobby Deol and Twinkle Khanna’s debut. Despite this, Bollywood and its beautiful people have been quite accepting — so, what exclusion is he talking about? 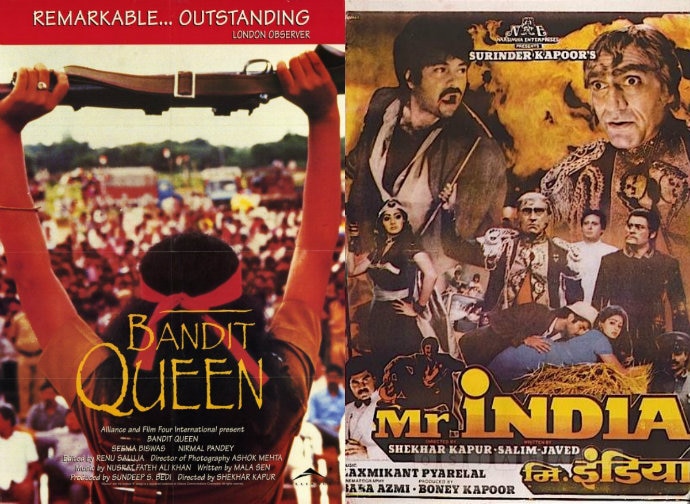 We already appreciate Kapur's works — why this cry for attention then? (Photo: Movie posters/Twitter)

Even if we were to believe that his uncle had no role to play in him landing a film career, he’s grown up with privileges many would give an arm and leg for. A father discouraging a son from choosing films as a career is hardly a massive roadblock — was that what he was referring to in his tweet?

The fact is, we like Kapur and respect him for his talent already. We don’t need a sob story to heighten our liking. What his efforts to portray himself as underprivileged are doing is simply question his motives — is he vying for Prasoon Joshi’s spot in the industry?

A scroll through his Twitter timeline would answer that question.

And also remind us of the value of humility.

Of how the son of a farmer from Belsand, a village in Bihar, nurtured the dream of becoming an actor ever since he played a girl in a village natak, but he couldn’t dare reveal his aspirations until a young boy near his village made it big in Bollywood with Satya — Manoj Bajpai.

That man is Pankaj Tripathi.

And there’s a real story of struggle.