The power of nudity: How exposing naked body and genitals changed the world

No less than our ancestors, psychologists have understood the startling effect of exhibiting one’s genitals in public. In many ancient cultures, the phallus — the male member in erection — was publicly employed as a weapon in life-threatening situations. The act supposedly had a favourable effect on the whole community, but such unembarrassed showing was completely different from an exhibitionist, who does the same just for his own sexual excitement. It is a very old habit. In ancient Greece, the phallic statues of the god Priapus had the magical power to scare away infiltrators, and the Roman god Fascinus, depicted in the same form, was invoked as a protective power against witchcraft, envy and the evil eye.

Female genitals were also applied to combat evil forces or negative influences, to calm down the threat of natural disasters or to openly ridicule an enemy — and according to various sources, even earlier than the male:

Female figures with vulva exposed were widely used as amulets in ancient times in Egypt, Greece, Rome, Christian Europe and various other parts of the world. It was believed that bad weather could be mitigated, storm quelled, lightning averted, rain brought down and fertility to the land ensured, by women baring their private organs to the sky and fields, or to the sea.

Pliny the Elder (23 or 24 to 79 CE), who never married and had no children, believed that a naked menstruating woman with loose hair would forcibly impress hailstorms, whirlwinds and lightning: if she walked thus around a field, caterpillars, worms and beetles would drop down from the ears of corn. Indeed, even without her menstruating, he knew for sure, a sea storm would abate as soon as she started stripping. In Greek mythology, there is the example of Baubo, an old woman with a clearly marked vulva on her chin or between her legs, as can be seen on several ancient images. The story goes that she shaved off her own pubic hair and exposed her genitals to the grieving goddess Demeter in order to cheer her up. In northern Europe, there are other examples of old stone carvings of female figures with a gaping vulva. These naked figures are to be found on medieval churches, castles or city walls, mainly in Ireland and Great Britain where they are called sheela-na-gig. These images probably served similar purposes, that is, to avert death or evil by means of grotesque representations.

According to several researchers, in Asia genitals and nakedness were also one of the most powerful means to ward off evil, for example in Aceh, Indonesia. On the Caroline Islands in Micronesia, carved wooden female figures were fixed over the doorway of a chief’s house — their hands resting on their thighs, the splayed legs reveal a striking vulva marked by a black triangle. Such images, called dilukái, served to protect health and harvest of the villagers and to ward off evil spirits.

According to Mircea Eliade, "It is not coincidental that each example of signs representing the female genitalia used as apotropaic devices are found on gates. The vulva is the primordial gate, the mysterious divide between nonlife and life."

Genitals fascinate more obsessively in societies where they are not allowed to be seen in public, and nobody dares speak about them openly. This is why they have inspired dances, rituals, images, amulets, graffiti, jokes, curses and gestures.

Ancient stories about the deterring effect on enemies of deliberately exhibiting women’s genitals are also told in Ireland and China; stories in which women pull their skirts up or off, and by doing so are able to scare away the enemy by showing their genitals. Apparently, this was an impressive form of cursing.

In Africa, one finds recent examples. During an oil protest, in June 2002, women used this form of action, after years of unprecedented environmental damage, suffering and poverty in the community. The underlying reasoning was the same: we all come into the world through the vagina. By exhibiting their vaginas in public, the women conveyed the message without words: "Herewith we take back the life we have given you."

By means of this social execution, they denied the enemy his continued existence. The men struck by this curse are considered to be dead. From now on all women would refuse to cook for them, marry them, make any agreement with them or buy something from them. The women, singing, occupied the ground of the oil industry, and many men joined the protest.

They realised that their sisters, mothers, grandmothers and wives were able to draw the world’s attention in a way they themselves could not. Unarmed, the women kept seven hundred workers hostage, and succeeded in blocking the production of half a million barrels a day. This curse of nakedness, deeply rooted in tradition, was their most effective way to avert misery and misfortune. The oil industry granted many of their demands: new jobs, schools, electricity and water for the villagers in the region. 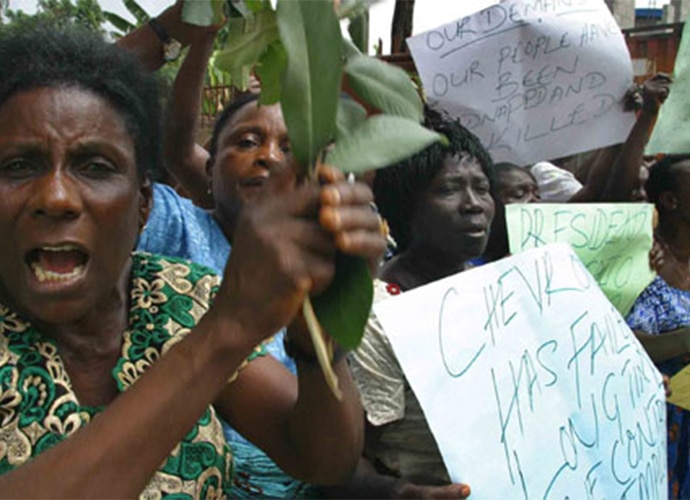 In July 2004, something similar happened in the north-eastern state of Manipur, India, where, in the aftermath of Thangjam Manorama’s murder, torture and probable rape by soldiers from the Indian Army, twelve middle-aged women confronted the army camp, stripped off their clothes, and unfurled a banner saying “Indian Army Rape Us”. The twelve Imas or “Mothers of Manipur” had left their hair loose as a mark of mourning and they announced that they were all Manorama’s mothers. In the face of their demand that the men who had killed Manorama should come out and confront them, the police and the army personnel reacted with embarrassment and shame.

The women had successfully displaced the shame of rape and nakedness onto the clothed and armed security personnel. Although they were eventually arrested, they were released from jail and no charges were brought against them. A year later, in a remembrance ceremony for Manrorama, the twelve Imas were given clothes to mark the occasion. 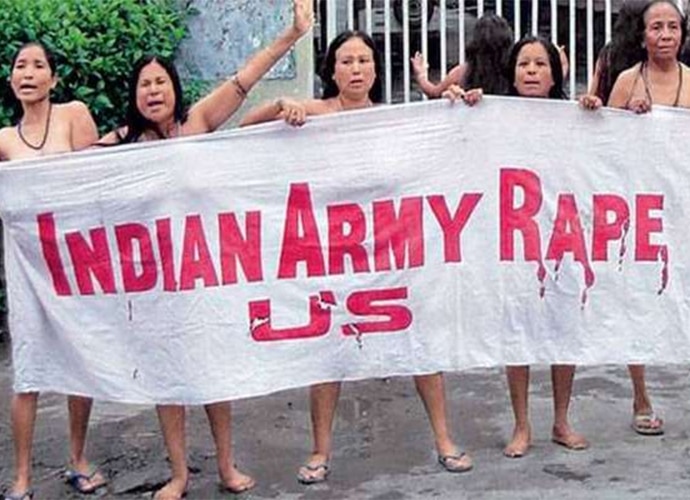 In 2004, Manipuri women disrobed themselves in public and held out the banner that said 'Indian Army Rape Us'. [Photo: Indiatoday.in]

Gestures representing the phallus are far from rare in the public space, such as the naked middle finger put up in front of someone. Originating from Greece, as far as we know, this gesture is more than two thousand years old. In homosexual relations, it referred to anal sex. Among the Romans, who took the gesture from the Greeks, putting up the middle finger was considered very rude. This "f*ck you" gesture came back to Europe in the second half of the twentieth century from the United States, and is now considered to be so offensive that you risk a considerable fine if you make it to a policeman.

Among Roman soldiers, another sexual gesture was popular as a symbol of good luck: the "fist and phallus" amulet (manus fica in Latin) is in Italian referred to as mano fica, with fica, "fig" as a vulgar word for vagina. Putting the thumb between the forefinger and the middle finger, mano fica refers to sex. Fist and phallus gestures and amulets have travelled from Mediterranean countries to other parts of the world.

Originally this gesture served to avert the evil eye or evil spirits. The belief in its protective effect might well have originated from the idea that demons are sexless, and can magically be dispelled by seeing gestures or power objects referring to sex or propagation. On ancient Greek vases, phalluses have been depicted with the head decorated with a protective eye, as people did with ships: eyes one needs to find one’s way in unknown territory.

Belief in the magical forces of genitals exists in many places. In Mediterranean areas, the widespread belief exists that if you put a hand (preferably the right) on your naked or covered private parts, you will promote good luck and avert mishaps. According to French violinist and director Jean-Pierre Wallez, some singers always briefly touch their genitals before they perform. Did this traditional gesture stick in Mediterranean people’s genes? The deposed Egyptian President Morsi made the gesture automatically during an interview on television, without foreseeing that this unconcealed gesture would cause a stir and hilarity all over the world.

Do obscene gestures or words conjure up protecting forces or do they represent sublimation of frustrated sexual desire? According to Sigmund Freud, someone who uses obscene language subconsciously hints at a sexual act vis-à-vis the offended person. It seems quite unlikely that the numerous contemporary f*ck-sayers and addressees are aware of that Freudian link, but do we really know the deepest stirrings of the heart?

[Excerpted with permissions of Speaking Tiger Books from Naked or Covered: A History of Dressing and Undressing Around the World; written by Mineke Schipper]

#History, #Thangjam Manorama, #Genitals, #Nudity
The views and opinions expressed in this article are those of the authors and do not necessarily reflect the official policy or position of DailyO.in or the India Today Group. The writers are solely responsible for any claims arising out of the contents of this article.

A Dutch author of non-fiction and fiction, she is best known for her work on comparative literature mythologies and intercultural studies.