The sad life of Omar Sharif - Hollywood's Sultan of seduction

The harshest irony is that, to the public, it always appeared as if he had the most enviable existence.

The story of Egyptian actor Omar Sharif, star of epics including Lawrence Of Arabia and Doctor Zhivago, is perhaps the saddest, loneliest tale in all of movie history.

After a life filled with losses, at the weekend, his son Tareq announced the latest tragedy: that his 83-year-old father has Alzheimer’s disease.

But it has also been a life overflowing with wealth, adoration and affairs with the world’s most desirable women.

Sharif squandered his good fortune — with divorce from the only woman he ever truly loved, an illegitimate child he refused to acknowledge, millions lost at the gaming tables, a glittering career abandoned and outbursts of violence.

The harshest irony of all is that, to the public, it always appeared as if he had the most enviable existence. After decades spent living alone in luxury hotels in Paris or London, staying up till 5 am at the casino or the bar, the actor has now returned to Egypt. But this is no homecoming: he still lives in a hotel, at a Red Sea tourist resort. His life, it seems, is as rootless and lonely as ever.

Sharif was born Michel Chalhoub in Alexandria, in 1932. His father Joseph was a rich timber merchant, but it was his glamorous mother who would set the course of his life.

Claire Chalhoub was far from maternal: aged ten, Sharif was sent to boarding school, Cairo’s snobbish Victoria College, where Claire hoped the harsh regime and basic diet would make him lose his puppy fat. It was the school’s theatre that would prove his inspiration. He played the title character in his first production, The Invisible Duke, concealed in a box on stage for most of the play.

Joseph Chalhoub was aghast to hear that his son wanted to be an actor. When he forbade it, the teenager staged a suicide bid — slashing his wrists, though later he was adamant he had not really intended to kill himself.

By now, the would-be star was already a ladies’ man, selling his possessions if he couldn’t cadge money from his parents to take girlfriends to dinner.

He had applied to the London drama school RADA, when in 1954 he landed a part in an Arabic film called The Blazing Sun, after the leading lady took a shine to him.

Faten Hamama was the most famous actress in Egypt, but she had never been kissed on screen before. The young lothario chose Omar Sharif as a pseudonym, to spare his father’s embarrassment. The kiss provoked a national sensation. Raised in the Greek Catholic church, Omar converted to Islam, so that he and the Muslim Faten could marry. But the relationship fell apart in 1962 when Sharif was cast as Sherif Ali in Lawrence Of Arabia. Sharif’s first appearance, shimmering out of the desert haze, won countless admirers.

But the attention destroyed his marriage. Convinced that he would not have the strength to remain faithful, he told Faten that he wanted a divorce — while she was still young enough, he said, to remarry. They separated in 1965. He always described her as "the love of my life".

A string of short-lived romances followed. Sharif was linked to actresses Tuesday Weld and Diane McBain, and to Hollywood veteran Ingrid Bergman. 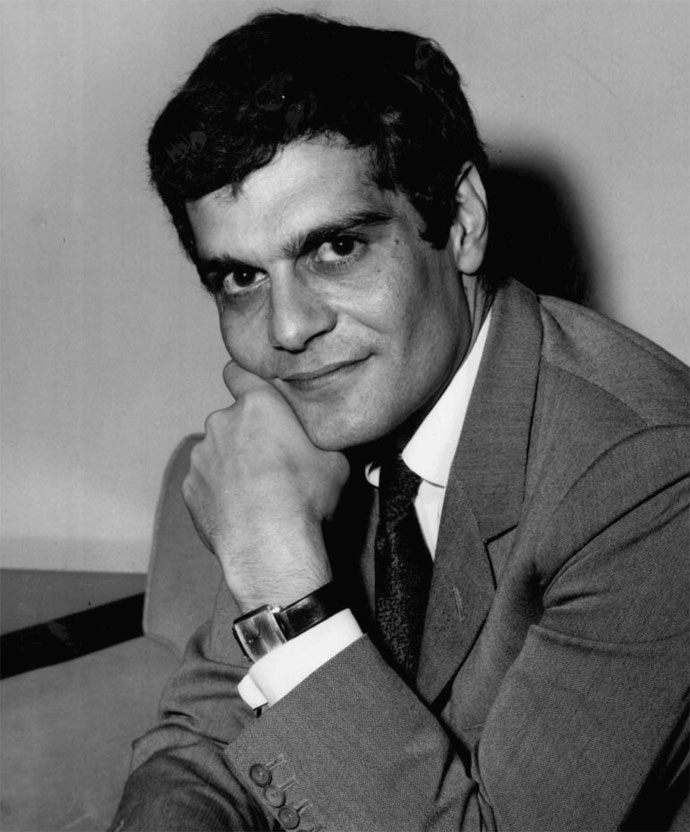 In 1968, he worked with Barbra Streisand on the musical Funny Girl. "I thought she was not very attractive at first," he remembered. "But gradually she cast her spell over me. I fell madly in love with her talent. The feeling was mutual for four months — the time it took to shoot the movie."

Later that year, he was starring opposite Catherine Deneuve and another on-screen love affair spilled over into real life. A short relationship with actress Barbara Bouchet followed. By now, though, all Sharif cared about was pocketing fees for roles, however dire, so he could pursue his twin passions — playing bridge and breeding racehorses.

"I don’t think I could live without a deck of cards in my hands," he declared, when asked on BBC radio’s Desert Island Discs in 1978 what luxury he would need most as a castaway. But the cards and the casinos were bankrupting him.

After losing 750,000-pounds in one night at roulette, he was forced to sell his house in Paris, and announced: "I don’t own anything at all apart from a few clothes. I'm all alone and completely broke. Everything could have been so different if only I had found the right woman." His gambling addiction, he admitted, was madness. He blamed boredom, and the loneliness of living out of a suitcase.

He did, however, dote on Tareq, his son with Faten. And he adored his grandchildren, whose mockery of his dreadful films made him ditch acting in the mid-Nineties.

Gambling was not so easy to renounce. After losing more than 20,000-pounds at the Enghien-les-Bains casino in Paris in 2003, he headbutted a policeman and was given a suspended prison sentence.

Sharif denied having Alzheimer’s, but when Faten died in January, aged 83, their son Tareq was forced to confront the final tragedy of his father’s life. He broke the news to Sharif, who reacted with deep grief. A few days later, the old man had forgotten. "How is Faten?" he asked.

Sharif is said to be aware that he was an actor, but can no longer distinguish one film from another.

#Alzheimer’s Disease, #Hollywood, #Lawrence Of Arabia, #Omar Sharif
The views and opinions expressed in this article are those of the authors and do not necessarily reflect the official policy or position of DailyO.in or the India Today Group. The writers are solely responsible for any claims arising out of the contents of this article.