Oscars 2022 went viral for that Will Smith slap. 10 highlights

Held at Dolby Theater, the Oscars 2022 finally took place on March 27, with their own fair share of drama. Every year, the Academy Awards are known to be memorable (J-Law's iconic fall, La La Land's Best Film envelope mix-up), but this year may be the most memorable ceremony in Oscars history.

Records were made and slaps were thrown around at this year's Oscars. Here are the 10 things you need to know about the Oscars 2022:

The winners for this year's Oscars are:

With its Best Picture win, CODA became the first streaming movie to win in the category at the Oscars. The movie was acquired by Apple for US $25 million at the Sundance Film Festival in January 2020 and has been available to stream on Apple TV since its theatrical release.

Dune won the most awards at the ceremony; 6 in total and all in the crafts category. CODA came in second, with 3 trophies. As far as studios go, Warner Bros led the race with 7 wins while Disney trailed with 6 wins.

2. THE SLAP THAT STUNNED ALL

During his presenter speech for Best Documentary, Chris Rock went on to joke about Jada Pinkett Smith's hair loss condition, alopecia. Chris cracked an insensitive joke by saying, "Jada, I love you. GI Jane 2, can't wait to see it, alright?" which enraged her husband and Best Actor winner, Will Smith. A moment after Chris cracked the joke, Will walked up the stage and slapped Chris. After he was slapped, Chris said, "That was a nice one, okay? Wow, Will Smith just smacked the s**t out of me!"

Will Smith just punched Chris Rock and told him "keep my wife's name out of your f***ing mouth" pic.twitter.com/1f1ytdbMRv

Chris simply responded with, "That was a greatest night in the history of television."

The joke was a reference to the 1997 film GI Jane, where Demi Moore played the role of GI Jane with an intense buzzcut. 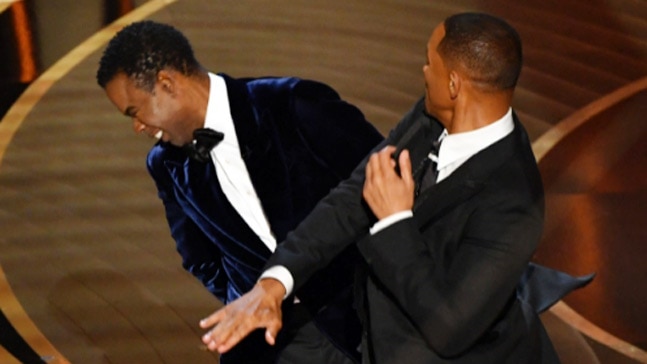 Variety's executive editor Ramin Setoodeh who was present at the ceremony and live-tweeting, confirmed that the altercation wasn't staged. He tweeted, "Someone who works for the Oscars told me that Chris Rock was not interrupted by Will Smith at rehearsals yesterday. It was not supposed to happen. It was real."

Someone who works for the Oscars told me that Chris Rock was not interrupted by Will Smith at rehearsals yesterday. It was not supposed to happen. It was real. #Oscars

Ramin also tweeted from inside the theatre that during the slap, the audience thought that altercation was staged but when Will began to yell at Chris, the audience realised that the fight was actually real.

There was a loud thud inside the Dolby when Will Smith slapped Chris Rock. It seemed like a skit at first, but when Smith started to yell at Rock after he returned to his seat, it dawned on everyone at the #Oscars that this was a real fight.

During the commercial break, just after the fight, Denzel Washington, Bradley Cooper, Nicole Kidman, Tyler Perry and Lupita Nyong'o were few of the celebrities who came up to the couple to comfort Jada and give a 'pep talk' to Will.

Son Jaden Smith was in favour of his father's actions and said, "And that's how we do it. My dad's speech made me cry."

The Academy has not yet made any official comment on the altercation. On a lighter note, this is what we imagine Chris's point of view must have been, onstage:

and this is how the audience reacted to the fight:

The audience after Will Smith smacked Chris Rock #Oscars pic.twitter.com/ylSsbp1fUL

The West Side Story actress won the award for Best Supporting Actress, making her the first Afro Latina and openly queer woman of colour to win an Oscar for acting. During her acceptance speech, Ariana said, "Imagine this little girl in the back seat of a white Ford Focus. Look into her eyes. You see an openly queer woman of colour and Afro Latina who found her life and strength in art. That's what I believe we're here to celebrate."

She continued, "To anybody who has ever questioned your identity ever, ever, ever, or you find yourself living in the gray spaces, I promise you this. There is indeed a place for us."

Ariana was nominated alongside with Dame Judi Dench and Kirsten Dunst. She also thanked and praised director Steven Spielberg and the cast of West Side Story in her acceptance speech.

Congratulations to @TroyKotsur, winner of the Academy Award for Best Supporting Actor for #CODAfilm#Oscars pic.twitter.com/Tvug4kMppa

Troy dedicated the award to the deaf community during his speech.

You can watch the speech here:

Troy Kotsur received a standing ovation at the 94th Academy Awards after he became the first deaf male actor to ever win an Oscar — watch his acceptance speech #Oscars pic.twitter.com/f8753VxLh0

The audience congratulated Troy by clapping for him in sign language:

"Look at me now, I did it. I love you." ? Troy Kotsur has made history as the first deaf male actor to win an Oscar, and the crowd signed their applause. #Oscars pic.twitter.com/ejkCMrKylW

With her brother FINNEAS, Billie Eilish has now become the youngest artist to win three awards; an Oscar, Grammy and a Golden Globe, for her theme song, No Time To Die in the newest James Bond movie.

See the pair's reaction to their monumental win here:

Billie and @finneas' reaction to winning their first #Oscar ! ?pic.twitter.com/klQ5jhRTzW

Dressed in a tennis-ball yellow dress, Beyonce opened the 94th Academy Awards by performing her nominated song from King Richard, Be Alive. Surrounded by multiple singers and back-up dancers, all dressed in the same colour as her, this was the first performance by Beyonce in the past 5 years.

You can watch the performance here:

Beyoncé’s performance at the 2022 #Oscars pic.twitter.com/Qo2PwUQtKz

7. LATA MANGESHKAR AND DILIP KUMAR LEFT OUT OF IN MEMORIAM

Legendary singer Lata Mangeshkar and veteran superstar Dilip Kumar were not paid a tribute in this year's In Memoriam section. The section is known to pay a tribute to artists and filmmakers the global film industry lost in the year.

Mangeshkar died on February 6, 2022, while Dilip Kumar passed away on July 7, 2021. Indian viewers of the Oscars are furious with the missing tribute. One user tweeted, "The Oscar has no meaning to Indians if they cannot pay tribute to 1. Lata mangeshkar ji 2. Dilip sahab."

While another user tweeted, "They should have shown Lata Mangeshkar and Dilip Kumar in the In Memoriam section ..I mean come on man! They are CINEMA LEGENDS! #Oscars. PS - MAYBE THEY ARE MENTIONED ON THE SITE BUT THAT DOESN'T MAKE IT BETTER."

They should have shown Lata Mangeshkar and Dilip Kumar in the In Memoriam section ..I mean come on man! They are CINEMA LEGENDS! #Oscars PS - MAYBE THEY ARE MENTIONED ON THE SITE BUT THAT DOESN'T MAKE IT BETTER

One user credited the missing tribute to colonialism. A Twitter user wrote, "The amazing world-record setting #LataMangeshkar (who passed away from Covid) sang more songs for more movies than shown in all Oscars combined. Yet, the #Oscars2022 #Inmemoriam did not see it fit to honor her even with a mention. Sometimes, I think, colonialism still lives on.."

The amazing world-record setting #LataMangeshkar (who passed away from Covid) sang more songs for more movies than shown in all Oscars combined. Yet, the #Oscars2022 #Inmemoriam did not see it fit to honor her even with a mention. Sometimes, I think, colonialism still lives on...

Even popular filmmaker Madhur Bhandarkar tweeted, "It’s disheartening that memoriam section of Academy Awards did not pay tribute to two legends, Dilip Saab and Lata Didi. Both the icons had significantly contributed by their timeless work for more than 7 decades."

It’s disheartening that memoriam section of Academy Awards did not pay tribute to two legends, Dilip Saab and Lata Didi. Both the icons had significantly contributed by their timeless work for more than 7 decades. ? https://t.co/BwO4KeN0Ad

Remember the Twitter contest the Academy was conducting to vote your favourite fan moment in a movie? Zack Snyder's Army of the Dead won the recognition at the ceremony. Coming in second was Camila Cabello's Cinderella, followed by Johnny Depp’s Minamata in third place, Spider-Man: No Way Home in fourth and Tick, Tick Boom in fifth place. (READ MORE HERE: Oscars will let you vote for your favourite movie. Do India's Jai Bhim and Marakkar qualify?)

Zack Snyder also won the Oscars Cheer moment for his version of Justice League, popularly known as Justice League: Snyder's Cut. The scene that was recognised at the ceremony was the Flash Speed Force scene. The other competitors for this recognition were; the Spider-Man Team Up moment from Spider-Man No Way Home, Neo dodging bullets in The Matrix, Jennifer Hudson singing And I’m Telling You in Dreamgirls; and the Avengers Assemble moment in Avengers: Endgame.

Toby Emmerich, who sabotaged Zack Snyder’s JL film in 2017 and his run at DC, sat in attendance at the #Oscars and had to look up at the film that he did everything to bury, win #OscarsCheermoment One of the biggest F U moments of all time! #RestoreTheSnyderVerse pic.twitter.com/yZPEa6a2yr

The Oscars 2022 is the first time both prizes have been given out.

Multiple celebrities showed up at the ceremony and the Vanity Fair Oscars party in the iconic Oscars carpet colour, red.

Here's what some of them wore:

I saw this photo of Ariana DeBose and screamed to the room "SHE'S WEARING PANTS!!!!!" Ariana DeBose is absolutely my best dressed of the night. Calling it now #Oscars pic.twitter.com/v1aqdH7xe9

Joe Jonas and Sophie Turner, retweet if you agree pic.twitter.com/CzOmCiXaiZ

All we can say is, this year's Oscars will surely not be forgotten soon (and Will Smith has quite a part to play in that)!