Sex, spirituality and lies - what I learnt about Rajneesh inside Osho ashram

I was in my early 20s when I stepped through the gates of the Osho Ashram in Pune for the first time. I was accompanied by my partner Claudia, a Croatian cellist and composer, who at the time was studying Indian classical music in Bombay.

A middle-aged blonde woman clad in a flowing maroon robe ushered us into a booth for an HIV test. It was a mandatory requirement for all new members. The commune was centered around the controversial godman, Bhagwan Rajneesh, who had been rechristened Osho after his return from the United States. 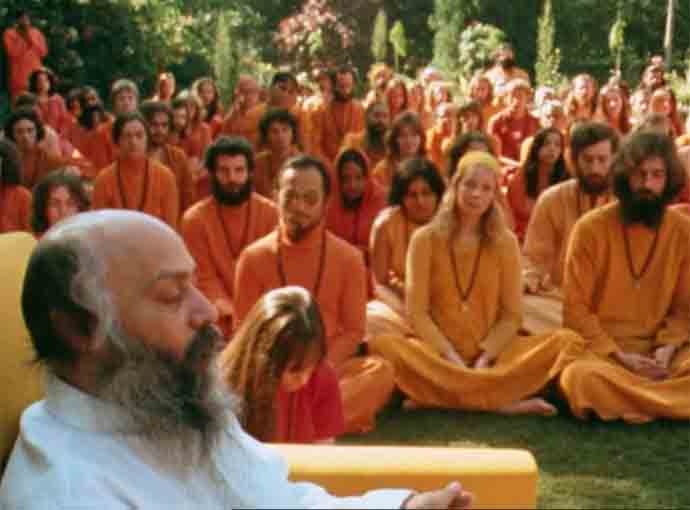 Bhagwan Rajneesh in a still from Wild Wild Country.

Born Chandra Mohan Jain on December 11, 1931, in Kuchwada village of Madhya Pradesh, Rajneesh was deported back to India after pleading guilty to two counts of felony. He along with his neo-Sanyasins moved out, lock, stock and barrel, from "Rajneeshpuram", his sprawling 60,000-acre commune in the state of Oregon. Within three years, his followers had transformed the barren expanse into a city of up to 7,000 people, boasting a fire department, police, restaurants, malls, townhouses, a 4,200-foot airstrip, a public transport system using buses, a sewage reclamation plant and a reservoir.

The events that unfolded at the commune and the stand-off between its inmates and local residents comprise the core of the Netflix documentary series Wild Wild Country. It is a fascinating portrait of the inner workings and power dynamics of a modern-day cult led by a charismatic Guru idolised by millions around the world. Watching this riveting series brought back many old memories of time spent and lessons learnt at the commune.

As the days and weeks went by, I got into the swing of things at the Pune centre. The day would start early with the signature "dynamic meditation" to awaken stagnant energies lying dormant in the body and invigorate the mind, “thereby breaking ingrained patterns in the mind-body complex that keep us trapped in the past”, as the Guru taught.

The hour-long session was divided into five parts: We began by exhaling vigorously in a chaotic, intense manner for 10 minutes, followed by 10 minutes of total catharsis - releasing suppressed feelings and emotions by singing, shouting, dancing, kicking and laughing.

"A little acting often helps to get you started. Never allow your mind to interfere with what is happening. Consciously go mad. Be total," the instructor told us. With arms upraised, we jumped up and down on the flats of our feet, shouting "Hoo! Hoo! Hoo!"

The sound was supposed to resonate with the sex centre, in turn unleashing powerful creative energies. This was followed by 10 minutes of total stillness. We froze in our tracks, stood motionless in one place and became a witness to everything going on inside and around us. And then, came alive again as piped music filled the room, and danced in celebration.

We were encouraged to shed our inhibitions and act spontaneously in all situations. Invariably a few people would end up crying after the session in throes of cathartic release.

The atmosphere at the ashram was open and permissive. Consorting with multiple partners and practicing non-attachment in all spheres of life, especially the personal, was widely encouraged. Claudia and I formed separate intimate relationships with a number of our fellow Rajneeshis.

The core of Rajneesh’s philosophy emphasised that in order to know the truth one had to first satiate every repressed desire as it arose. Only through a process of deep healing enabled by untying emotional knots and releasing our accumulated trauma could one attain the desire-less state as embodied by the Buddha. His teachings were a syncretic blend gleaned from esoteric texts of the world’s mystical traditions: Buddhism, Hinduism, Sufism, Taoism and Gnostic Christianity.

He would hold forth on the Tantric texts of Shaivism one day, followed by the teachings of Tibetan yogi Milarepa the next, after which it was the turn of Chinese monk Lao Tzu, the Sufi mystic Rumi or Zorba the Greek. His ashram was consciously modelled on the community the Russian mystic GI Gurdjieff led in France in the 1930s.

He criticised organised religion as empty of substance, oppressive and burdened with useless rituals. In a 1968 lecture series, later published under the title From Sex to Superconsciousness, he angered many religious conservatives, including the Shankaracharya of Puri, by calling for freer acceptance of human sexuality and became known as the "sex guru" in the Indian press.

In his view "any religion which considers life meaningless and full of misery, and teaches the hatred of life, is not a true religion. Religion is an art that shows how to enjoy life." He encouraged his Sanyasins to follow a celebratory rather than an ascetic lifestyle. He soon began attracting a number of Western acolytes, including the Greek shipping heiress, Ma Yoga Mukta (Catherine Venizelos), with whose help he purchased the property at Koregaon Park in Pune that would become the international headquarters of his organisation.

In the mid-1970s, a group of therapists from the Human Potential Movement (HPM) arrived at the ashram. The movement had arisen out of the counterculture rebellion of the 1960s against mainstream psychology and organised religion. It formed around the concept of cultivating extraordinary potential that its advocates believe to lie largely untapped in all people.

Some of the early therapy groups in the ashram, such as the "encounter group", were experimental, allowing a degree of physical aggression as well as sexual encounters between participants. These therapy groups became a major source of income for the ashram, though in later years their methods were diluted and watered down.

In 1981, following an assassination attempt by a Hindu fundamentalist, Rajneesh instructed his secretary, Ma Anand Sheela, to look for another sanctuary. She located a barren stretch of land adjacent to the sleepy town of Antelope, Oregon, on which the sprawling township of Rajneeshpuram was eventually built.

Ironically, the same forces of religious fundamentalism which had driven the guru out of India would cause his return to the land of his birth, this time in the garb of conservative Christians, who like their counterparts in India, could not tolerate the total rejection of conventional values and inhibition-free lifestyle that he advocated as a panacea for the ills plaguing the modern world.

A series of incidents including the bombing of a Rajneesh hotel in Portland, charges of a bioterror attack on local residents and allegations of immigration fraud and money-laundering attracted the attention of the FBI who were looking for an opportunity to bring down the commune. Sheela decamped to Europe and eventually served two years in prison for unspecified crimes.

Rajneesh was pushed into a tight corner by state and federal prosecutors and had no choice, but to cop a guilty plea and leave the country in order to avoid incarceration. He finally landed in India where he remained until his death in 1990.

I stayed in Pune for about three months the first time and returned few years later for a longer visit. This time I was accompanied by an old friend Daniel, a talented sculptor from San Francisco whose work had been exhibited at the Guggenheim and the Tate Modern.

After a couple of therapy sessions, one of the instructors advised him to stop taking his prescribed medication for bipolar syndrome and instead surrender completely to life in the ashram. It would heal him from the inside out, rendering his medication redundant, the teacher said.

Daniel told me that he had never experienced the kind of happiness he was feeling at the moment, surrounded by "beings of light", as he called the Sanyasis. He had met a woman, Ariane, who he felt instinctively to be his soulmate; the one he was meant to be with forever. They would spend hours before and after meditations, gazing deeply into each other’s eyes.

About two months into our stay, Daniel was found dead in his room. He had taken his own life by an overdose of sleeping pills. A teacher in one of the therapy groups had advised Ariane to relinquish all attachments in order to be free of suffering. She had left Daniel and taken another lover. It was a common practice in the commune. Without the aid of his prescription medication, the trauma was too much for his fragile heart to bear. The burden of being human proved too much for my friend, however, much he may have sought enlightenment.

Following the tragedy, I had an angry confrontation with the ashram authorities, demanding the immediate termination of the teachers involved in the sordid affair. Daniel’s parents had come down by then and a few members of the ashram staff were taken in for questioning by local police. A few days later I left the premises, never to return again.

I learnt a few things from the episode. It is not by escaping, but by facing our darkest fears that we can overcome them. Surrendering to a higher power, a guru or spiritual organisation may feel liberating at first, but can quickly turn into a means of bypassing the realities of the human condition.

Embracing the chaos and uncertainty of the world, accepting our imperfections and making peace with the inherent dissatisfaction of life and, at the end of the day, finding joy in the simple things, was ultimately more effective than all the grand philosophies of the world.

Perhaps it was this simple message that Rajneesh was trying to convey, before he fell prey to the same forces that he was teaching us to conquer.