I have not watched the Tamil version of Bigg Boss regularly, at best catching snatches of the show while surfing channels in the last four weeks.

Frankly, watching slow TV of a dozen-odd so-called celebrities under house arrest discussing breakfast, lunch and dinner and bitching about each other over inane stuff is not my idea of entertainment.

In fact, when it was announced, I had my doubts if the Tamil audience, addicted to a scripted format of TV soaps, would take to what seems to be an unscripted reality show.

The Hindi version had its adult (Tanisha-Armaan for one) and uncouth moments (of the Kamaal R Khan variety), making some seasons unsuitable at times for family viewing and I wasn't sure if a more conservative Tamil Nadu would be willing to accept either skin show, CCTV intimacy or expletive-laden brawls.

I was wrong. The staggering response (3.6 crore views in the first two weeks) was quite a surprise. The reason for that, apart from the host, Kamal Haasan, has been one particular contestant: Oviya Helen.

Rather early into the show, the viewers have shown their liking for Oviya, with many even predicting that if her present following continues, the 26-year-old south Indian actress may even win the show.

Oviya has acted in Tamil, Malayalam, Kannada and Telugu movies, with the 2010 Tamil film, Kalavani where she played the lead, one of her biggest hits. 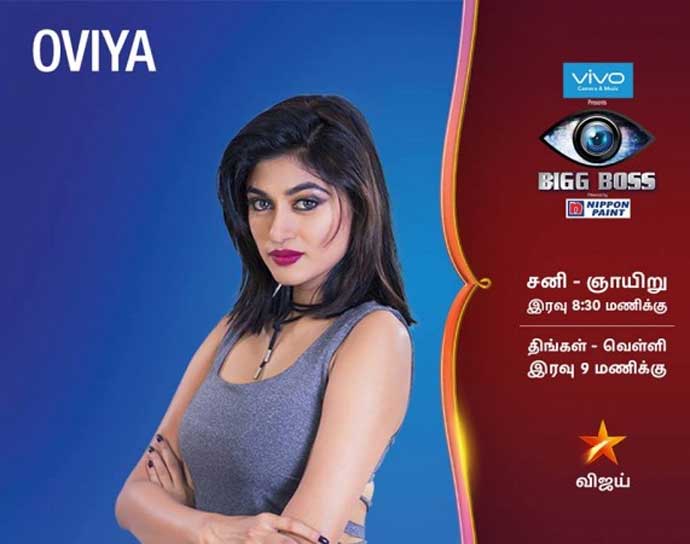 Rather early into the show, the viewers have shown their liking for Oviya.

There was a major build-up to Saturday's episode because this was the third time that Oviya had been nominated for elimination. Usually support for a particular contestant is orchestrated online but this time, eminent people, who you wouldn't usually associate with rooting passionately for a contestant in a show of the Bigg Boss kind, have been faithful consumers.

Actor Simbu, playback singer Chinmayi, music composer James Vasanthan have been among those, expressing their admiration for Oviya online. Kamal himself alluded to the huge number of votes that Oviya had secured, ensuring her stay inside the house.

What explains the "Save Oviya" movement?

1. On the face of it, the support for Oviya seems to be the result of the ganging up against her by at least three other inmates, among them actors Namitha and Gayatri. The third is Juliana aka Julie, who incidentally shot to fame with her catchy slogans during the pro-Jallikattu uprising at the Marina beach in Chennai this January. As a result, Oviya comes across as the underdog, evoking sympathy and support.

2. What also works for Oviya is the charm she exudes. Her "Neenga shut up panunga'' in a Malayalam accent to a fellow contestant has achieved cult status. Movie merchandise site, Fully Filmy, even released a T-shirt with her quote, raising its stature to that of a life mantra.

It helps the TV channel that Oviya has acted like a magnet to attract the viewers every night.  The memes around Oviya, given a life of their own through WhatsApp forwards, have made the show and the actor a water cooler conversation topic and a hot topic on the Chennai Metro.

3. Viewers were able to see that she was much more honest about her reactions. The episode on Saturday showed that Juliana had lied and not Oviya, raising her stature further. Host Kamal Haasan's putting down of Juliana by accusing her of hallucinating has only added to Oviya's stature.

4. In the first quarter of 2017, we saw a huge hate campaign running against AIADMK general secretary Sasikala. It picked up momentum after she pushed O Panneerselvam to quit as CM. Tamil Nadu conveyed its disgust for the palace intrigue that the Mannargudi family indulged in.

The manipulative manner in which Juliana along with others tried to corner Oviya inside the Bigg Boss house, to my mind, is a non-political version of the February drama in Tamil Nadu.

The success of Bigg Boss in Tamil is also a pointer to a Tamil Nadu coming out of the closet. What is interesting is that it is not just the youth who are consuming the show, I know of men and women in their 60s who are avid watchers of Bigg Boss.

The original reason for watching the show - "Kamal is hosting it and doing a good job of it'' - has now changed to "I am curious to see how Oviya handles the negativity''.

Clinical psychiatrist Purnima Nagaraja says the experience reminds many of us of that one bully or more in our school, college or work life. "We could not answer back to that bully in our life so it is nice to see someone else showing spunk and giving it back. A few seasons ago, Shilpa Shetty was lauded for standing up to racial behaviour on Big Brother and showing character. This is pretty similar,'' says Nagaraja.

At another level, the gutter fights, bad language, manipulative behaviour and some eye candy appeal to the base instincts in all of us.