This time, Akshay Kumar boldly goes where no mainstream star in Bollywood has gone before. He steps into what many would deem hush-hush domain, with a film that talks of sanitary pads.

The decision to do Pad Man is quite plucky for a commercial superstar, and the film must rate as Akshay’s most remarkable career decision yet. But look closely and there is a method in the actor’s risk-taking madness. Pad Man, at a very obvious level, is also a neat box-office trick — one that allows Akshay to continue with his avatar as an on-screen mass messiah. The image, after all, has reaped rich lately for Bollywood’s new-age Mr Bharat.

Pad Man draws from the remarkable life of Arunachalam Muruganantham, a Coimbatore-based entrepreneur who invented the machine that drastically cut down the cost of manufacturing sanitary pads. The invention curbed the unhygienic use of cloth during periods, among women in rural south India. Today, 23 of India’s 29 states have such machines in villages.

That backdrop info is essential to understand the primary challenge Akshay and the film’s director R Balki set out tackling: They were trying to craft entertaining cinema out of a taboo topic. The sheer popularity Akshay enjoys as a screen hero saw both the actor and the filmmaker being insistent that Pad Man was an entertainer as any other Akshay flick, so what if it deals with a subject most Indians would flinch from discussing openly. 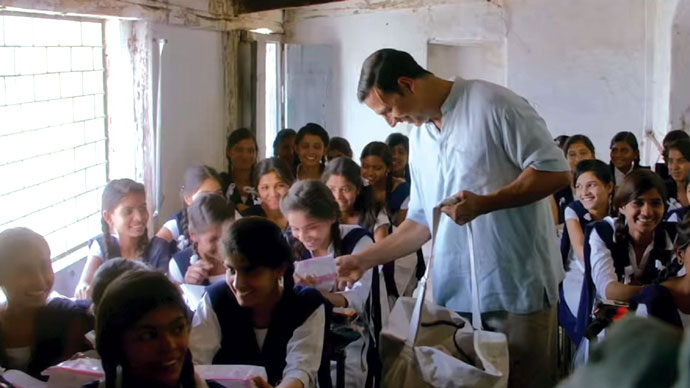 As such, the material at hand has been documented in Bollywood twice before. Amit Virmani’s 2013 docu-film, Menstrual Man, was about Muruganantham. Last year, a small-budget film named Phullu narrated a fictional tale around the same subject.

Pad Man, though, was always about a bigger impact. Balki obviously kept that in mind, you realise noting his approach. He tries infusing humour into the screenplay, along with an abundant emotion quotient. Occasional laughs range from wit to slapstick when the narrative isn’t slipping into elaborate melodrama.

Balki has always been high on unusual ideas — past efforts as Cheeni Kum, Paa, Shamitabh and Ki & Ka would evince. However, his grip on narration is not always as strong. Pad Man, like all that Balki has directed so far, sees the filmmaker fumble as a storyteller. The focus seems unsure as the narrative turns schmaltzy, and filmmaker becomes busy accommodating scenes that will let Akshay play out a do-gooder act overflowing with designer plasticity.

Still, Akshay’s performance remains enjoyable all along. Playing Laxmikant, a character broadly based on Muruganantham, he injects quiet simplicity and resilience into his protagonist.

Pad Man, like most "socially relevant" Bollywood biopics, actually serves a single purpose. Rather than focus honestly on the subject of relevance, the film insists on being a feel-good platform to let its male star (incidentally also a co-producer on the film) score some acting points with crowd-pleasing gusto.

That makes Pad Man okay for a onetime watch strictly, as an unusual Bollywood film. For a more honest update on the same subject, check out Menstrual Man.