In India, art is about the higher classes. Dalit artists are ignored or their work is called 'activism': Padma Shri artist Sudharak Olwe

Olwe is working on a new project, Photographers for Famers.

Padma Shri awardee photographer Sudharak Olwe — whose work often means turning the lens on the oppressed — has formed a collective to bring together photographers from across the country to support the recent farmers’ protest, with the hashtag #PhotographersForFarmers on different social media platforms.

Olwe, who comes from the Vidarbha region of Maharashtra, says it is the duty of an artist to focus on the issues of the poor. He won the Padma Shri in 2016 for his work, and continues to document the lives of the disenfranchised.

Here, Olwe speaks with India Today about his work

In your work, you use black and white tones. Is that a metaphor for the subjects you cover?

Photography in its essence is a contrast of light and shadow. The medium of black and white separates and removes any distraction that colour provides, and gives us a picture that speaks truly about the people and the harsh realities it wants to portray. 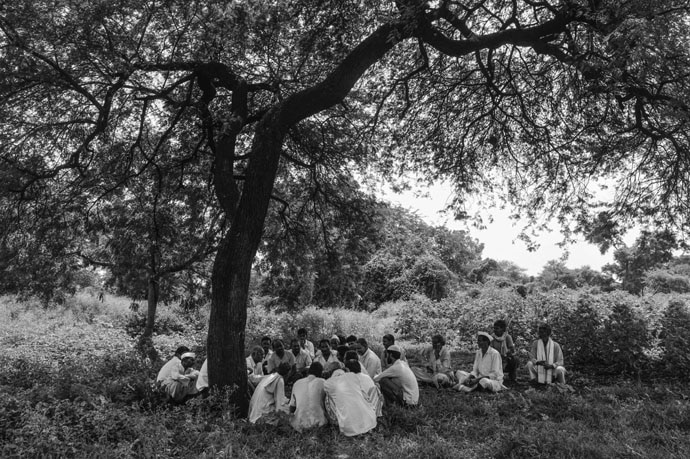 Farmers in Yavatmal, Maharashtra, discussing how to tackle pest attacks on fields. Such destruction of crops had caused farmer suicides in the region. (Photo: Sudharak Olwe)

The colour black has been associated for the longest time with the darkest of things — ideas like impurity — and is also a colour for dissent. My pictures of conservancy workers or victims of domestic violence and caste discrimination are not only a showcase, but also an appeal and a statement for people to look up and take cognisance.

The heavy contrast of BW imagery serves as a reminder of the stark reality of the subjects’ situation and despair.

In your work, how do you see the marginalised? Is there a need for art from the community to be showcased by galleries and museums in India, and why?

In India, art in general has been associated with and practised by the higher class. The lowest rungs of society have had no access to education or art education, no access to art in galleries or books.

Most Dalit art in the past few decades has grown out of the frustration of finding a place for themselves in established structures. Hence, much of the work concerns itself with the struggles of a Dalit life.

The art is essentially challenging a system and creating a space for itself as part of democratic equality and contemporary expressions. A struggle that has grown in the past three decades in the form of poetry, painting and even photography is all about creating alternative thinking and space, where not only concerns, but also creative realms are engaged.

The term ‘Dalit’ in the state of Maharashtra has its own history. The Dalit Panthers made this term into one of rebellion, especially those among the oppressed willing to reject cultural subjugations. The term is written on the banners of the Scheduled Caste Federation. In academic analysis, the term is extensively used. ‘Dalit Art’ or ‘Dalit Artist’ is a term that is used as it provides a representation of oneself and the community in this society of ignorance. It is an outlet for Dalit intellectualism that has thrived for years on ideas of acceptance, the rejection of caste, class and challenging power structures.

It is imperative that the art community support, take notice and promote Dalit artists.

It not only helps an artist, but also changes perceptions of the community, breaks down barriers and promotes equality. According to Prof YS Alone, Ambedkarite artists are challenging the entire metanarrative of culture and art practices.

How do you view your practice?

Photography for me has been a way to explore and communicate ideas that are an impetus to bring about social change in neglected and marginalised communities. Sharing my pictures with a broad audience, and initiating a dialogue through the images I shoot, has been at the forefront of my artistic journey.

My genre of work involves making visible those realities that existed around us, but remained invisible in Indian society. I come from a social strata that is looked down on and discriminated against in my country; the camera has been my companion and resort. A deep connect to my own people and helping them are my motivators. 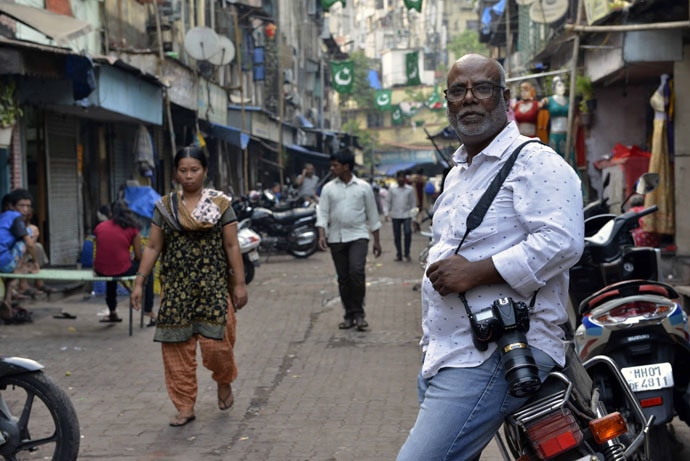 Olwe at Kamathipura, Mumbai's red light area, where he has worked for years documenting the lives of sex workers. (Photo: Mandar Deodhar)

As much as it is an artistic endeavour for me, it is also a medium for me to tell stories of those who have suffered injustice, violence and discrimination because of their caste, creed, colour, religion and gender. I believe that art also helps in creating introspection, which may eventually create a perceptual change.

Is caste an issue when it comes to visual arts?

Caste discrimination in its most rudimentary form can be detected by looking at the representation of sections in working and labour structures. The same applies to visual arts in India, which for decades, or even centuries, has had next to no representation or promotion of Dalit art.

The majority of Dalit artists have self-funded their work and exhibitions. Visual art in India has been dictated by hierarchies and systems — the works of Dalit artists are either ignored or thought of as activism instead of art.

Isn’t art an experiment in self-realisation and thoughts?

If you look around the mainstream art scene, which includes festivals and international group shows, there is hardly any representation of Dalit art, or, for that matter, issues that concern the commons. Discrimination is deeply-rooted in India as a society.

What is your latest project? Please tell us about your experiences while documenting the people from the community and why these stories matter?

Currently, I am documenting stories of atrocities committed against Dalits and tribals across the country. Even after documenting stories of violence over two decades, it is still heartbreaking to hear and see such brutal caste discrimination. Murders, rape and arson in the name of caste are commonplace in the hinterlands of India. We as urban dwellers hardly come across this kind of hate, at least not in public.

Sharing and talking about these stories is the only way we can ask and hope for justice for these victims.

Examining these issues through the medium of pictures casts light on the human element and delivers a perspective on identity, dignity and acceptance, which can greatly impact public consciousness, and in turn, policy makers.

Have things changed? There are many young artists from the community trying to showcase art that relates to their experience. How do you see their work?

The artists are doing fantastic, meaningful work, creating spaces, niches and challenging societal norms and ideas of superiority. Many are constructing their own narrative that many can then identify with. This has spurred change in the community, but it is also a slow process.

Hurdles to a truly free expression of art for Dalits are many. It will be years before a major paradigm shift takes place, though one can see the building blocks for it being set in place. I strongly feel that sensitisation among the patrons of art is equally important.