Letter to Mammootty: Why I'm no longer your loyal fan

I write this after my recent article — which expressed solidarity with Parvathy — became an issue with your other fans.

I write this in the backdrop of my recent article — which expressed solidarity with Parvathy — becoming an issue with your other fans after the Women in Cinema Collective (WCC) shared it on their Facebook page. My observations are derived from the cumulative disappointment of having to watch my childhood idol look like a pale shadow of his former self during his prime on celluloid.

My first memory of watching a film at a movie theatre is the time I saw Pappayude Swantham Appoos (1992) as a seven-year old. I have been your fan ever since. That film had a child of my age, Appoos, playing the central character, with you playing his single Dad. Back then, my father, too, owned a Tata Estate car — like the one you drove around in the film, and the scene where a lonely Appoos is shown waiting for his Dad at an Ooty boarding school after all his friends have left for vacation is straight out of my life. I would later watch the film on a VCR player over and over again along with your other films, Johnny Walker (1992), Jackpot (1993), No 1 Snehatheeram Bangalore North (1995) during my summer vacations. 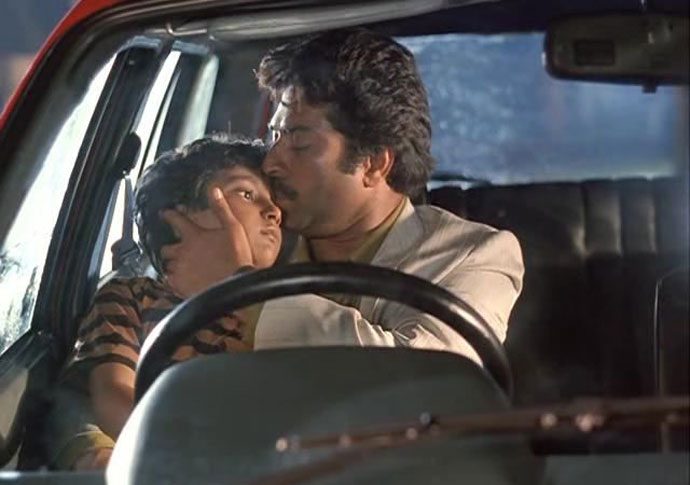 As a teenager, I became an even bigger fan as I began to appreciate your serious films. While most of my classmates were Mohanlal fans, I would passionately defend you in their company when the routine Mammootty versus Mohanlal debates happened during recess. More than an actor, you became a hero to my teenaged self as you chose your characters with due diligence back then.

People knew what to expect of your films in the '90s I grew up in. It didn’t matter to us that you weren’t doing comedy films like Mohanlal or didn’t dance like him. We loved your characters and understated performances and the modulated dialogue delivery. And the song “Santhamee Rathriyil” from Johnny Walker was more than enough for fans to disprove the theory that you had two left feet.

Post 2000, after winning a third National Award for Dr Babasaheb Ambedkar and a brilliant performance in Lohitadas’ Arayannangalude Veedu, your career seemingly hit a rough patch.

Eventually, you made your comeback after a break in Chronic Bachelor (2003) and we thought we would see you in more such impressive films. But what instead happened was a spate of comedies, most of them of the slapstick variety beginning with Thommanum Makkalum and Thaskaraveeran in 2005 (unlike the brilliant Azhakiya Ravanan).

It is possible that Dileep’s massive success in this genre post Meeshamadhavan (2002) influenced your choices, but it came as a rude shock to many of your fans who thought you couldn’t stoop to that level as we had always placed you on a pedestal.

It slowly dawned on us as you kept on doing trashy films like Annan Thampi, Ee Pattanathil Bhootham and Love in Singapore that you were doing films just for the heck of it at that point and not based on any other factor. If the slipping-on-the-banana-peel brand of humour was raking in the moolah those days, you were more than happy to do them. I remember asking myself at that point: if you were offered these films in your heyday, would you have accepted them? The admiration, adulation and reverence began to wither away slowly.

In between came Pranchiyettan and the Saint (2010), which once again gave hope to Mammootty fans like I as you chose to play a middle-aged man in the film. It showed what a brilliant actor you are and what you can achieve if you choose to play a character befitting your age. It also amply demonstrated exactly what was missing in your other film performances. Similarly, in playing the character of an old man, Murikkunnath Ahmed Haji, in Paleri Manickyam, you gave us glimpses of your artistic brilliance.

I have read somewhere that after a certain age, you can either choose to be a handsome old man or an unconvincing young man: Isn’t it time you made that choice? Don’t you think that as the most sought-after star besides Mohanlal, if you were willing to play middle-aged characters, scriptwriters would come up with powerful scripts for you?

I have also heard that the two central characters in Blessy’s Pranayam (2011), played by Mohanlal and Anupam Kher, were actually written with you and Mohanlal in mind: in fact, Kher’s role was meatier than Mohanlal’s in the film. I wish you hadn’t turned down that brilliant part of an old man, if it is indeed true that you were offered it.

The choices you made after Pranchiyettan and the Saint in 2010 once again proved that you were just accepting random films without meaningful scripts, as you have been doing for more than a decade now.

I wish you would introspect on your film choices post 2005 and ask yourself if they didn’t indeed ruin your once impressive résumé.

A friend in the film industry argued that losing fans like me wouldn’t matter to you as you have cultivated a bigger fan base by starring in mass entertainers in the intervening period. If that’s the rationale guiding you, my plea would fall on deaf years. But I am hoping against hope that you would reconsider your decision to do such crass, populist films at this point in your career.

Also read: How actors like Mammootty and Dileep are exposing rot of misogyny in Malayalam cinema

#Parvathy, #Malayalam Cinema, #Mammootty
The views and opinions expressed in this article are those of the authors and do not necessarily reflect the official policy or position of DailyO.in or the India Today Group. The writers are solely responsible for any claims arising out of the contents of this article.