Pati Patni Aur Woh: Why Bollywood refuses to grow up even in the time of #MeToo

If one sees the popular Hindi film industry from a distance, the chances of believing that it is not averse to change would be high. Lately, the kind of films that have emerged from the realm of commercial Hindi cinema also add to this perception.

Although it might be true that the people calling the shots are not resistant to change, they sure appear to resist being changed.

Nothing could be a bigger testimony to that than the way it still falls short of addressing the issue of sexual harassment both on and off screen.

An upcoming film, Pati Patni Aur Woh — a remake of the 1978 Sanjeev Kumar-Vidya Sinha-Ranjeeta starrer of the same name — where a much-married man has an affair with his secretary by emotionally coercing her and constantly playing out a sob story about his ailing wife, has the opportunity to set the narrative right but from the looks of it, we might be expecting too much. 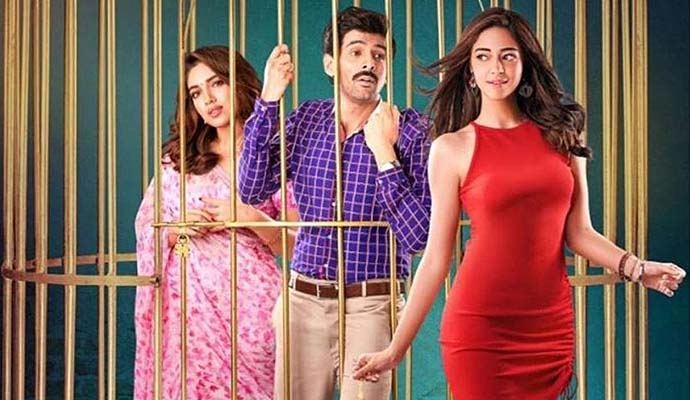 One look at the film's poster - the pati and patni standing in a life-size birdcage with the door open and the husband closer to the open door almost ready to follow the woh, the other woman - and you know it could well be the same river again. In a post-#MeToo world, the first time, there seemed to be a cohesive effort on the part of many industries, specifically media and films, to change the way it treated women.

Even though 'Bollywood' took some corrective action, it continues to fail in terms of onscreen portrayal of sexual harassment, especially in the shadow of its legacy of normalising and trivialising the issue.

The remake features Kartik Aaryan reprising Sanjeev Kumar's role, which is interesting because it makes the target audience in mind clear. In the late 1970s, Sanjeev Kumar, 40 at the time the film was made, represented 'Everyman' and, while Aaryan, 28, might not be the go-to superstar representative of the average man, he is an ideal pick from a demographic point of view. Kumar, too, was not the biggest star, but he appealed to a wider range of regular men.

Similarly, Kumar's co-star, Vidya Sinha, while popular, was not in the same league as box office stars like Hema Malini. In the remake, Sinha's role will be portrayed by Bhumi Pednekar, who, for want of a better expression, could be cut from the same fabric as Sinha.

With these parameters in mind, the remake is perfectly packaged for the viewer and this is where the plot thickens — what are the chances of the film addressing sexual harassment at workplace? Today, it's easy to accuse BR Chopra's original 1978 film of trivialising the issue.

However, back in 1978, it was taboo to talk about sexual harassment. As a result, films of the era rarely took such issues seriously. Later, people remembered it for the funny set pieces and songs such as 'Thande thande paani se…' and the end result was far from what should have been ideal.

The film is considered a comedy and it might be this aspect that would be highlighted in the remake. It's easy to squarely pin the blame on mainstream Hindi films for taking the average person, as far as possible, to react organically to situations when men in place of power exploit women.

At the same time, there have been films that have taken on social issues and presented them for the consumption of the general audiences in a way that they would be able to understand the nuances.

One such film that presented sexual harassment at workplace as close to reality as possible was Basu Chatterjee's Sheesha (1986) featuring Mithun Chakraborty, Moon Moon Sen and Mallika Sarabhai.

Even after three-and-a-half decades, the film remains peerless. Based on a Bengali novel by Shankar, Sheesha appears eerily uncanny to events that have unfolded in the last year.

In the film, Chakraborty plays a married man accused of rape by a telephone-operator in his office, Sarabhai, while his wife, Sen, is shown confused but chooses to stand by him.

There is a court case that ensues, but Dinesh (Chakraborty) is exonerated, owing to the lack of evidence.

Still, the climax leaves enough to suggest there is more than what meets the eye. Irrespective of how we see it, Bollywood has the ability to impact the average person's thinking and it must understand the role it can play.

Also read: Smile. You are the Joker. So am I.