Right from the time he came of age, my father’s enquiring mind began a thorough search of the origins of magic and its practice in India. Going through ancient Sanskrit texts and scriptures, yogic literature and treatises, he discovered that a good many of the celebrated magic acts of today were performed in the Vedic and later periods. “The Great Indian Rope Trick”, for instance, has been mentioned in Shankaracharya’s commentary on Vedanta as an offshoot of Indrajala Vidya, Kauchumara Yoga and Chhalitak Yoga. He also found out that the “Art and Science of Magic” was taught in such eminent seats of learning as the universities of Nalanda, Takshashila and Abantipura. Even in the Mahabharata, Lord Krishna was said to be trained in the intriguing craft of magic. It did not take much deliberation to make up his mind. He decided to become a full-fledged magician with the sole aim of reviving this ancient art form.

My father dearly loved our country and our culture, which gifted him with his identity as a magician. And understandably, he could not bear the yoke of colonial subjugation which in his time had weighed down his motherland. He wanted to break free, to unfasten the shackles and unlock the handcuffs as it were. Magic was all he had, his only means of taking on the might of imperial power.

He used this means effectively to the cause of “Swadeshi”, the patriotic desire to revitalise India, her unique culture and traditions (the Swadeshi concept developed during the movement against the partition of Bengal in 1905 but its ethos resonated all through India’s struggle for independence). Before his tour of South East Asia, he had already flung himself headlong into restoring the immense storehouse of “magical” knowledge this country possessed, recording and trying on every trick he could find. After his return from his tour, he took forward his mission with renewed zeal, travelling across the length and breadth of Bengal and beyond, wherever he was invited to perform — Jalpaiguri, Dinajpur, Pabna, Rangpur, Murshidabad, Dumka, Patna, Allahabad, Kanpur and, of course, Dhaka and Calcutta. And he ran the extra mile when they called upon him to raise funds for spreading the swadeshi spirit. In Allahabad, for instance, he performed at the Swadeshi Exhibition at the invitation of All India Swadeshi League to raise money for the Kamala Nehru Memorial Hospital. In the absence of Jawaharlal Nehru, Kamala’s illustrious husband, then busy with political work in Kanpur, PC Sorcar was the star of the event. 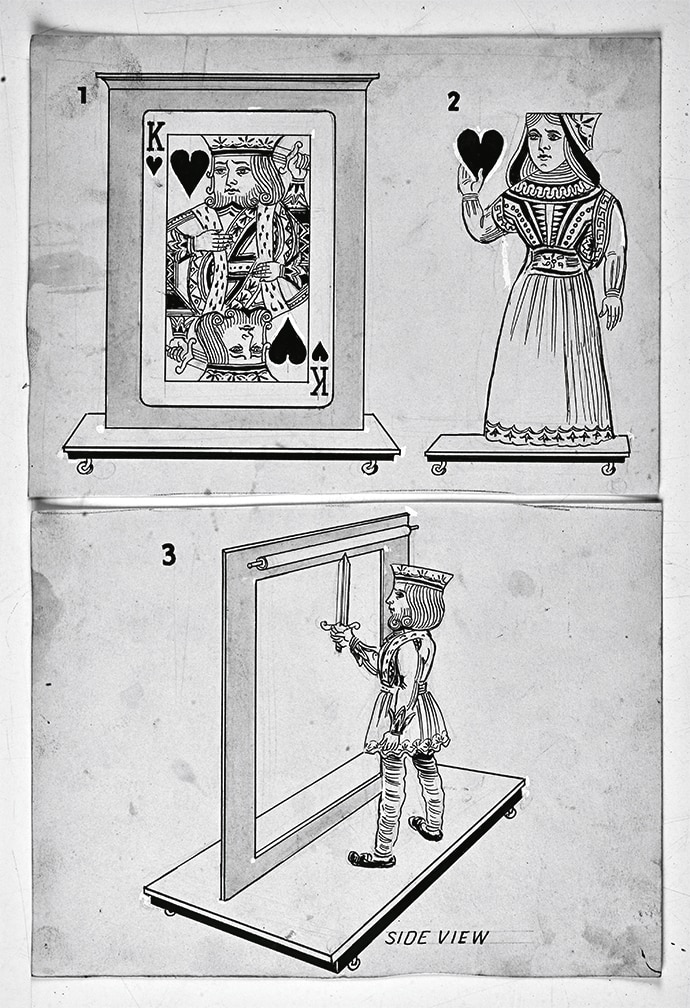 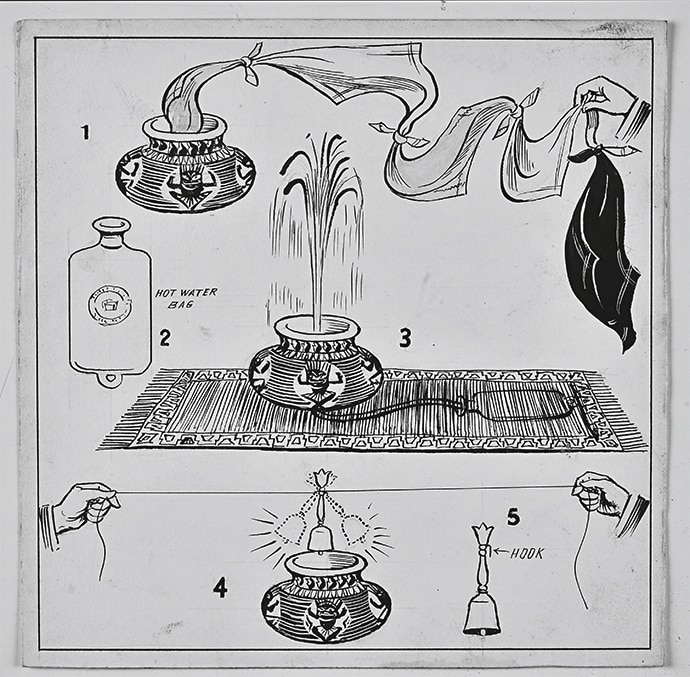 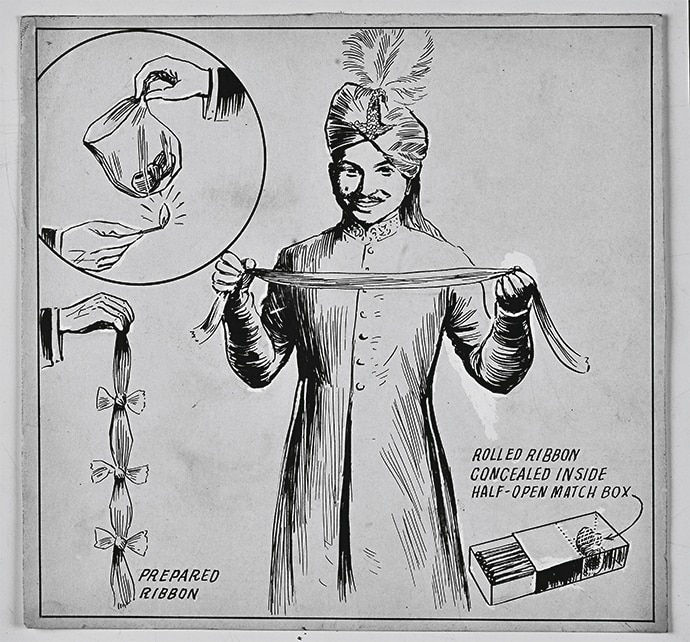 His feats evoked both admiration and concern among the British administration of the time. At a garden party in 1936 given by the Pabna district magistrate in honour of JC Farmer, Bengal’s inspector general of police, Sorcar’s magic created a furore. After putting up some of his routine acts, he declared that he could unlock any handcuff in the world. The Pabna police took up the challenge immediately. Sorcar was handcuffed by the district’s superintendent of police Zakir Hosain and, thereafter, subjected to a thorough examination by the guests. It was heard that, on previous occasions, Sorcar had successfully escaped only one pair of handcuffs; so, this time, he was secured with two, for good measure. The superintendent of police informed everyone that both the pairs were selected from the latest supply to Pabna jail. After the hands were tightly fastened, the keys were retained by one of the police officers.

The crowd waited with bated breath. In a few seconds, Sorcar, an enigmatic smile on his face, opened both the handcuffs with a slight twist of his wrists. Everyone was astounded and awe-struck. In the midst of a resounding applause, the inspector general, the superintendent and other police and district officials stared on in disbelief. This “magic” did not go down well with them.

A couple of years before the Pabna episode, my father had escaped from a sealed box with handcuffs on inside the Mymensingh jail. He kept escaping boxes, trunks, wooden chests, rope ties, iron cages and what have you. It was as if he was impossible to contain.

This was my father’s way of instilling hope and courage into the hearts of the freedom fighters incarcerated by the British. “Karar oi louho kopat, Bhenge phel kor re lopat (Those iron doors of your prison, Smash them, make them disappear)” — it seemed Sorcar was putting into action those famous lines by celebrated poet Kazi Nazrul Islam. The British administrators were unnerved. If Sorcar could defy the shackles, who knows, the masses may take inspiration and rise up.

The Pabna party ended with yet another awe-inspiring act by my father. He offered the chief guest a writing pad and pencil, requesting him to write on it whatever he pleased. Farmer scribbled a few lines and handed the paper to the superintendent of police to read aloud to the other guests at the party. The police official read: “I promise to give the magician one gold medal as I am highly pleased with his feats. Signed: JC Farmer, August 19, 1936.” Farmer nearly fell off his seat. Clearly, this was not what he had written, although he vouched for the handwriting and signature to definitely be his.

Sorcar had done it again! He had used “force writing”, a popular magic technique, to impose his will power on a high-ranking British officer of law. Farmer surely had a very disturbed sleep that fateful night in Pabna.

The most talked-about instance of my father’s “force-writing” act was not on any British ruler, though, but his own countrymen. A few months before his departure for Japan in 1937, Sorcar was invited to perform at a celebratory tea party for the newly elected ministry of Bengal being hosted at the Imperial restaurant in Calcutta. During his act father gave a writing pad to Fazlul Huq, the prime minister — so designated then — asking him to write something on it.

Huq Sahib wrote whatever he pleased and put his signature at the bottom. Each of the ministers was also asked to write something and sign, which they did one by one. Sorcar then asked Calcutta’s commissioner of police, LH Colson, to read out what Huq and the ministers had written. It turned out that each one had submitted their resignation from the ministry and nominated PC Sorcar as the prime minister! Poring over the pages of the writing pad, each one agreed that the signature and handwriting on it matched their own. Everyone was bowled over but there was a round of applause.

My father was called the “man with X-ray eyes” because of his “uncanny powers” of reading lengthy articles or drawing sketches or solving mathematical puzzles blindfolded. He, of course, created a commotion when eyes plastered with a four-fold cloth bandage, he cycled on the Strand in Pabna town, manoeuvring deftly through streaming cars, rickshaws, push carts and the crowds. Likewise, Calcutta was amazed to find Sorcar driving round the busiest streets with his eyes sealed shut with flour dough and bandages. They began to believe that he had an inner eye which, as he said at the time, he acquired through yoga and Indian occult rituals. 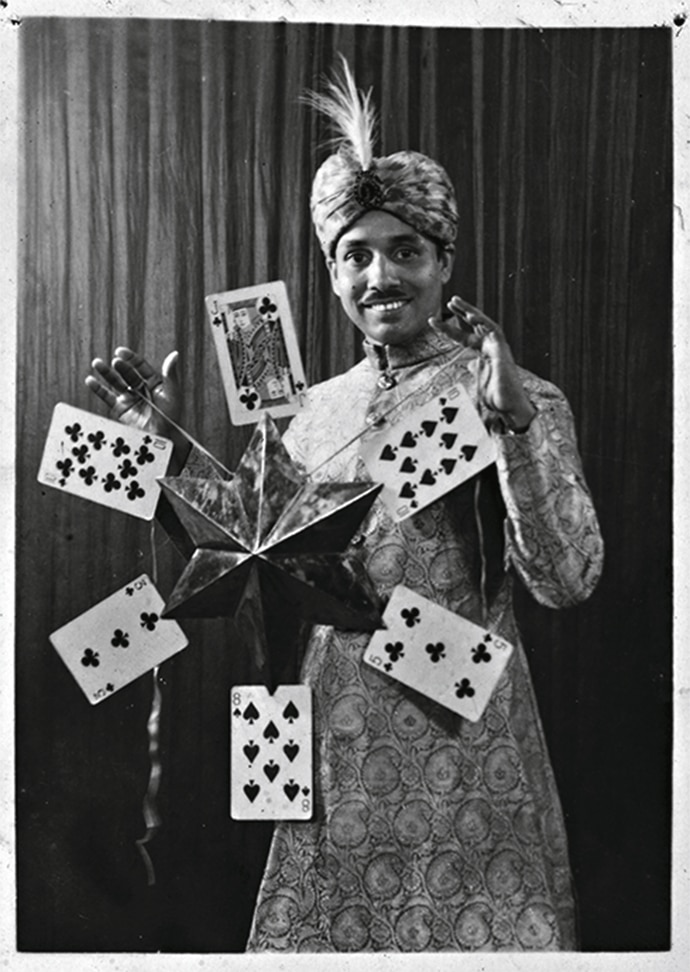 Many such feats in my father’s repertoire, as well as their presentations, were in tune with both ancient and folk magic practices. They told of his deep roots in the traditional Indian magical arts and aesthetics. The chopping of a person’s tongue and then joining together the pieces was a prime example. In this act, someone from the audience was asked to volunteer and lie on an operation table. Sorcar moved his hands above the lying body as if to cast a spell. A team of doctors checked the subject’s pulse which grew faster and faster until it stopped dead. The subject had fallen into a deep trance, Sorcar said. He then proceeded to cut a good portion of the subject’s tongue with a surgical knife. The subject did not even stir. Moments later, with a swish of his hands, Sorcar joined the severed piece to the subject’s tongue. Thereafter, Sorcar moved his hands above the lying body once again and gradually the subject came around. My father had performed this act several times all over the country and abroad, on popular demand. And everywhere the doctors and surgeons certified that there was nothing fake about the tongue that was chopped. They also admitted that the act was “a medical puzzle”.

The most successful performance was at the Tajghat Palace at Rangpur in north Bengal. Newspaper reports suggest that a British jury had gathered there to supervise. The head of the jury, FO Bell, ICS, was so horrified at the sight of the severed tongue that he fainted when the act reached its climax. The jury, however, unanimously decided that the display was authentic. Many other distinguished figures such as NM Ayyar, another top Indian civil service official, DF Leslie, military intelligence officer, and so on described the act as “particularly thrilling”. 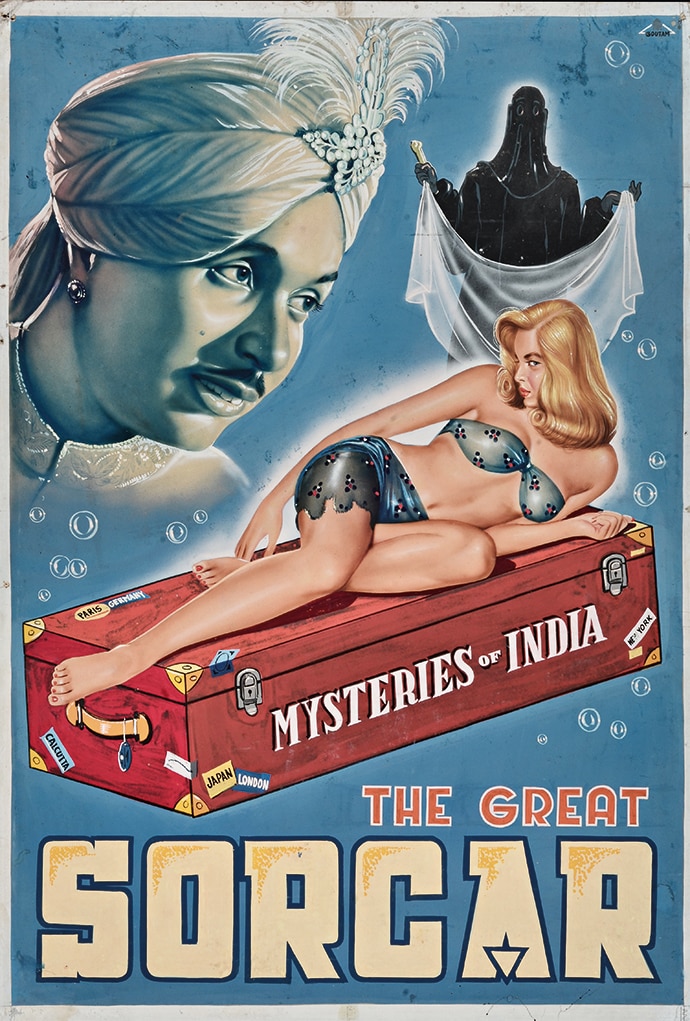 One of the most inexplicable acts of my father, particularly for Western audiences, was his version of “The Great Indian Rope Trick”. In this, a 12 to 15 feet long coil of rope ascended straight up in the air and stood erect like a pole without any visible support, as if fastened to the sky. A young boy, one of Sorcar’s assistants, climbed up the rope, balancing himself on reaching the top. Then, at a wave of the magician’s hands from below, the boy climbed down to the ground and the rope, too, would fall.

The rope trick had been performed in various forms by renowned magicians and madaris, throughout our land in different periods in history. Jehangir, the Mughal emperor, mentioned in his memoirs that a magician displayed the rope trick in his court. He not only made a human being disappear into thin air from the tip of the rope but even a panther, a lion and a tiger.

In fact, many of PC Sorcar’s acts have been picked up from Indian rituals and folklore. To the Western world, these appeared as utterly bizarre, unfathomable. Their magicians perfected sleight of hand tricks with coins and cards and billiard balls but Indian magic was in a league of its own. It seemed to defy rational science and the laws of nature. The Western media started likening the young Sorcar to Khuda Bux, a famous Indian magician of yore, who went to England and walked barefoot over a twelve-foot-long bed of red smouldering firewood soaked in gallons of paraffin. The English scientific fraternity put their heads together to emulate the feat.

The result was disastrous with a couple of medical men getting badly burnt the moment they stepped on the fiery footway. 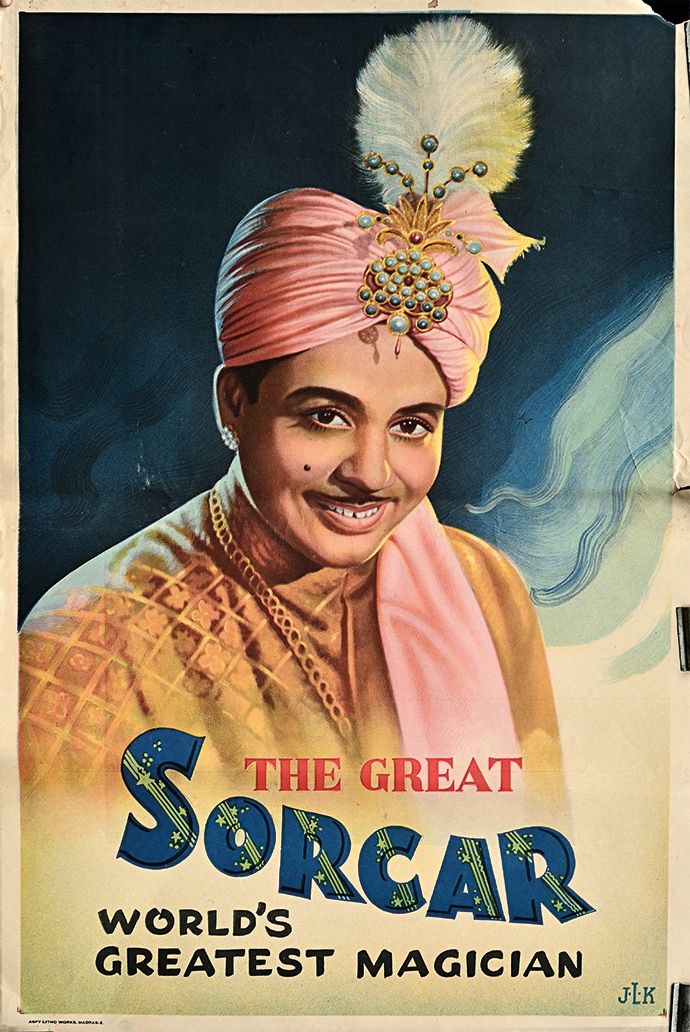 Telepathy, mindreading, hypnotism, mass hallucination — my father researched references to many of these intriguing subjects in ancient Indian texts, scriptures and lore, and they all went into enriching the presentation of his magic acts. It would, however, be a serious error to assume that he turned his back on modern science and scientific knowledge. In fact, he was extremely well read in scientific and technological advancements and used his mechanical expertise in bringing to life many of India’s ancient acts of magic. In this way, he cleansed and modernised Indian magic and provided a solid scientific foundation for it, dusting away the murky cobwebs of superstition that sometimes plagues the art even today.

(Excerpted with permissions of Niyogi Books from PC Sorcar: The Maharaja of Magic by PC Sorcar Jr.)

Also read: How Secret Superstar proves China is in love with Aamir Khan