What I discovered about weaving saris on a Pochampally Ikat trail

More often than not, one would associate the word "resist" with a form of protest, but on a recent trip to Andhra Pradesh's Pochampally villages, I learnt there's much more to it.

I went to a village and handloom park weaving Pochampally Ikat saris and material during a textile trail curated by experiential travel expert Breakaway, led by textile technologist Durga Venkataswamy, and it opened up a whole new world for me.

A traditional dyeing technique is called "resist" and results in glorious Ikats, Batik, tie and dye et al. Each takes shape through a separate and laborious method of blocking specified areas of the yarn prior to weaving, depending on the pattern, to prevent it from receiving the dye: that is, the method of printing these blocks, as it were, is different for each pattern. In college, I remember making Batik paintings using wax.

For weaving Ikat, a design is first chosen and the yarn tied at suitable spots after being tightly wrapped (at the handloom park, strips from old cycle rubber tubes were used to tie the yarn), such that the tied spot resists — it isn't dyed. The process of tying rubber bands on the yarn as per design, to resist dyeing in that area.

If a pattern includes more than one colour, the procedure is repeated a number of times. This may be done on individual yarns or bundles. Each time a new colour is added, the bound yarn is opened, ready for another round of wrapping.

This gives Ikat its unique feathered look. It's extremely time consuming and having seen its weaving, I, for one, will never complain about the price of Ikat when I buy the material.

Most Ikats are single Ikats, which means that either the warp or the weft is tied-dyed. Double Ikats require great dexterity, as both the warp and weft are tied-dyed and the weaver has to work on double looms. A young woman weaving inside the handloom park.

The process of weaving is called Ikat and its many varieties derive their names from the geographical areas they are woven in and the motifs used. Ikat made in the villages of Andhra Pradesh's Nalgonda area is called Pochampally. In Gujarat, it is called Patola and in Orissa, Bandha. In Andhra Pradesh, it is also called Chitki — after the Telugu word for "dot" or small, owing to the earliest dash-like patterns.

Durga Venkataswamy, our curator for this textile trail, runs Blue Lotus — an ensemble of next generation entrepreneurs, designers, dyers, weavers and weaver organisations committed to preserving traditional practices of handcrafting.

She explained the entire process, from the yarn to the finished material at the handloom park in Kanumukkala village, 60km from Hyderabad.

Master weavers of Pochampally founded the handloom park in 2008 with help from the ministry of textiles, Andhra Pradesh government and IL&FS. It integrates all the processes from spinning, graphing, tying, dyeing, to weaving and conversion into made-ups.

In the traditional Pochampally villages, it is only the Padamshali and Devangas communities who make Pochampally in their homes. But at the handloom park, men and women from other non-weaving families also come to work.

Durga took us through each shed in the handloom park, which is divided depending on the process and stage of weaving. There are men and women cleaning and separating the yarn, tying, dyeing, weaving and performing quality checks.

The separating of the yarn itself is an extremely laborious process.

While at home the weavers continue to separate the yarn mostly by hand, machines are used at the handloom park and other units for the task. However, small rooms have been created in the units so the weavers can relax, eat and occasionally rest, while they go about their job, just as they would do at home.

The history of Ikat itself is very interesting, with the word itself coming from the Indonesian mengikat, which means to tie. It was a technique popular in China, Japan and Indonesia.

Though Ikat became popular in the 19th century in the country, there is evidence that it came to India via trade with West China in the 7th century, as some of the women figures in the Ajanta Caves' frescoes seem to be wearing clothes that resemble Ikat patterns.

In the 19th century, Chirala, a coastal village in Andhra Pradesh, started making scarves using the Ikat method famous as "telia rumaal", but prior to that they soaked the yarn in a concoction of castor ash and oil for 15 days, repeatedly.

In fact, the word telia comes from this process of soaking it in tel, or oil. The result was that the finished cloth had cooling properties and was immensely popular as a headscarf in the hot temperatures of the Middle East, as it would also keep the neck cool.

The oil treatment is rarely used in modern Ikat weaving and it is just the dyeing process that gives the handloom its feathered look.

Though telia rumaals are no longer made in Chirala, the technique was adapted to make saris in the Nalgonda district, in 1950, upon initiatives by Kamladevi Chattopadhay, the chairperson of All India Handicrafts Board.

We visited the house of one master weaver K Narsimha in the Koyyalagudem village of Nalgonda. Narsimha, in his eighties, started weaving at the age of 16 and like others from his village learnt the craft at home.

He had a pit loom inside his house where he had just finished weaving for the day when we reached. Narsimha weaving with the loom at his house.

Narsimha showed us a telia rumaal that he had woven, along with some exquisite saris. He makes his own patterns, while his wife and daughter-in-law assist him during various stages of weaving, as does almost every family member in most weaver households.

However, both his sons now work in the city as income from weaving is restricted. It takes more than a month to weave a single sari and the process is too labour intensive to be financially viable for the younger generation.

This is the tragedy of many of our traditional arts and crafts, passed on from one generation to the other.

In Koyyalagudem, Narsimha took us to another weaver's house where a young weaver was working on a silk dupatta. It was breathtakingly beautiful and I immediately bought it. The pleasure of a dupatta straight from the loom is unmatched. 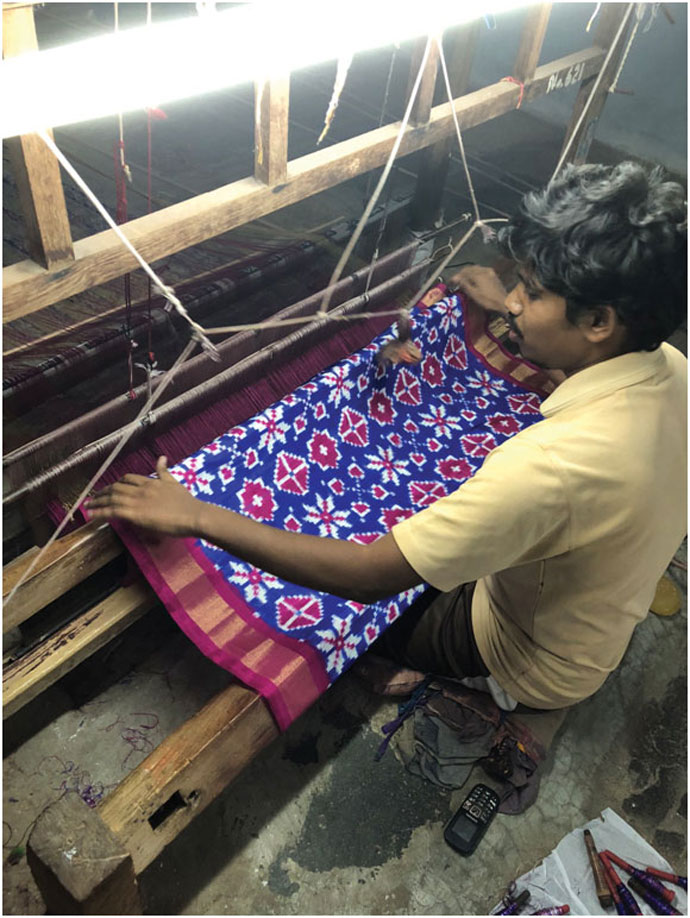 The dupatta I bought, fresh from the loom.

Next, we visited the Koyyalagudem Co-operative Centre that helps the weavers sell their material. In fact, we went crazy at the remarkable variety but were told that most of the material in the warehouse was already sold! We had to be content with few leftovers but still gorgeous dupattas, bedcovers and salwar suit materials.

For someone who is always on stone trails, this textile trail was illuminating and enriching. Of course, the bonus is, while I can't take stones home, I could bring lots of Pochampally back with me!