When someone asks me what wrong pop has done to Punjabi music, I say it's a virulent virus that transcends geographical boundaries and kills the spiritual fire of melody.

Punjab is not immune to the disease that has swept the music world.

A number of studies have been conducted about the impact of music on society, especially in the West.

A traditionalist and professor at Boston University, William Kilpatrick, wrote a detailed account of the state of American youth in 1992. His book, Why Johnny Can't Tell Right From Wrong, encapsulated the negatives and positives of various educational techniques to explain how America's youth culture has been drained of "moral context and moral energy".

The writer exposes the Achilles' heel of human behaviour that tends to treat historical artefacts as disposables.

"When the narrative sense is absent from individual lives, society also suffers an impoverishment. Both for society and the individual, the loss of story and history amounts to a loss of memory. We become like amnesiacs, not knowing where we are going because we don't know where we have come from," Kilpatrick wrote.

What he observed in America in the past century is no different from what we are noticing in Punjab and the Asian subcontinent today.

There's a general consensus world over that music is power. If that's true, this power can be either constructive or destructive.

Our own Johnny, Punjab, can't tell right from wrong. The pop music it has so fondly embraced, and is dumping on the rest of India, is destructive.

This cultural devolution isn't an overnight process. It happened more than 50 years, perhaps.

The usual culprits are Bollywood and a number of diasporic Punjabis. At home, a new breed of untrained singers and composers eyeing instant success are belting out culturally-lethal cocktails of jarring beats, lewd or senseless lyrics, imageries of what I call uncivilised bravado and stinking wealth for the local market.

What sold in the West is being sold pretty well domestically.

Punjabis and the rest of Indians, especially from Maharashtra, Gujarat to as far as Bihar, lapped up the glorification of sex, violence, drugs and so forth.

A prevention specialist at Arizona's non-profit notMYkid, Shane Watson, warns in a blog how music of the same kind influenced life.

"Just as I started discovering music’s true power, I ran across another seemingly effective method of dealing with my pain and loneliness: drugs and alcohol. Like music, it felt warm, comfortable, familiar, healing, and at times even transcendent," he writes in a column titled "Hey Artistes, Guess What? You're Role Models Whether You Like It or Not."

"My relationships with music and substance abuse not only coexisted, they began to overlap. I became especially interested in and drawn toward artists who had drug references in their songs, albums, and cover art. I felt some sort of bizarre kinship with those who openly embraced hedonism, excess, and self-destruction," Watson continued.

"For lack of a better term, it all seemed really cool to a foolish kid who lacked the wisdom, experience, and self-identity to know otherwise. After a while, my two areas of obsession began to fuel one another."

So, it's quite possible that Punjab's drug and liquor epidemic, crime record coupled with contemporary pop revolving around the same themes, are drawing power from each other.

Plato defined music as a "moral law". "It gives soul to the universe, wings to the mind, flight to the imagination, and charm and gaiety to life and to everything," says a quote ascribed to him.

If you just switch the word "moral" to "immoral", the entire exposition will then run into complete disorder - inflaming the soul, mind and imagination.

"Punjabi music is shoved to an abyss. It's standing where it never stood before," rues Bhai Baldeep Singh, an exponent of Indian classics and aesthetics. 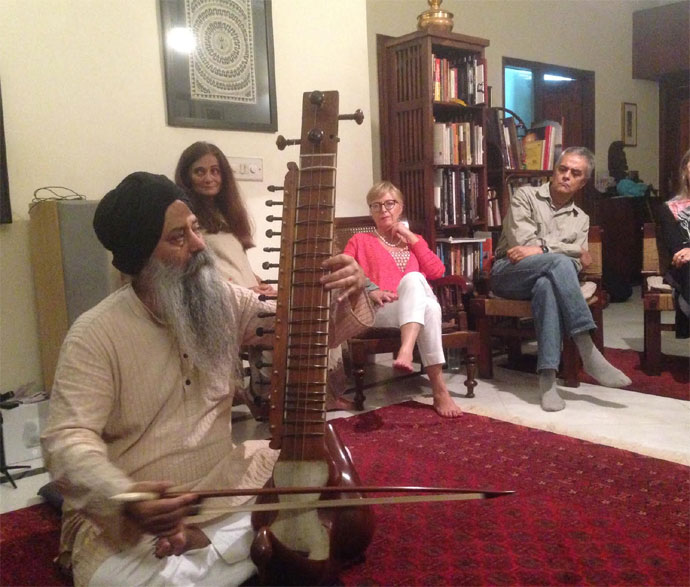 Singh's non-profit Anad Foundation, a music academy, is shutting down in the state because of what he alleges is a police crackdown on his conservatory of ancient instruments and genres in Sultanpur Lodhi. "I am the living example of how revivalists of our heritage are being systematically destroyed ironically by the custodians of a state that should be preserving them. There's no real respect left for the bearers of tradition," regretted Singh, as an old mellifluous recording of his granduncles rang through his hi-tech digital studio in Delhi.

Pop singers perhaps need to abandon self-indulgence and ask themselves whether their music touches the lives of their audiences.

Let me give you an example from "Bullah Ki Jaana Mein Kaun", a kafi (classical form of Sufi poetry) of Sufi philosopher Bulleh Shah.

A large part of India came to know of this amazing poem when Rabbi Shergill sang it more than a decade ago.

Shergill's rendition didn't really stir me as I found Bulleh Shah's elevating lyrics got lost somewhere in the overall packaging of the chart-topping song.

But when a passionate musician untouched by glamour sings "Bullah Ki Jaana Mein Kaun" beyond our Western borders, he casts a mystical spell on the listeners.

By courtesy of the internet, which is still unharmed by bilateral jingoism, Sain Zahoor can be seen whirling flamboyantly with his lute and anklets as he delivers Shah's kalam in an earthy tone.

If pop and industry have put it out, institutions and non-profits can very well revive it. State support is key.

"If you want to measure the spiritual depth of society, make sure to mark it's music," reads another quote attributed to Plato.

Let our age-old master-disciple tradition, the "guru-shishya parampara", not fade into history.

#Punjab, #Pop music
The views and opinions expressed in this article are those of the authors and do not necessarily reflect the official policy or position of DailyO.in or the India Today Group. The writers are solely responsible for any claims arising out of the contents of this article.