Priyanka Chopra's look at Meghan-Harry wedding was a royal disaster

Priyanka Chopra is, without doubt, one of the more sartorially sensible film stars from the Indian film industry, and now the American TV. Even in several of her US public appearances, Priyanka and her stylist mostly get the style quotient right. She is always dressed out in her best, whether in Indian, regional Indian or Western choices, showcasing her finest attributes.

However, at the royal wedding, the lilac Vivienne Westwood natty outfit did little for Priyanka Chopra. It made her look more stern, stiff and school marmish; and with that fallen lapel design, she came out looking more busty than required. Haute couture, heck, even off the hangar well-designed dresses are meant to accentuate facets that we are less endowed with and play down those that we carry amply about us. A sari, for that matter, scores remarkably on either front.

The day dress Priyanka chose, however, failed her miserably. I put out my unfavourable opinion of Priyanka’s “royal wedding” look on Facebook and I had friends pouring in to share what they felt about it. Sadly for Chopra’s stylists (and she does have a huge team of 25 people to mind her every moment), most of the people commenting on the post, agreed with my opinion.

One actor friend who is involved with theatre said to me, “She looked like she was going to the Royal Ascot race and not to the royal wedding.”

Another Milan-trained Art & Design expert friend, who has been involved in prestigious projects like the Commonwealth Games, said, “There is nothing wrong in wearing western outfits but this outfit certainly didn't do justice to the lovely artist. Besides, trying to be like ‘them’ Priyanka had a chance to stand out of the crowd and be different. Unfortunately, she looks awkward in the Westwood outfit.”

A banker friend based in Washington DC was unsugar-coatedly blunt and gave her broken-down-to-the-bone analysis saying, “I’d put her among the worst dressed. Simply no imagination. Overstuffed top. Poorly fitted skirt. The hat did not suit her. It made her face look round. The lipstick was the wrong colour for daytime, nor did it go with her clothes. What possessed her to go with Vivienne Westwood? You’re so right; she looked like a school marm.” A mainstream media writer who is an expert on art and style too was as put off as me and mentioned, “She makes you think of an émigré Indian auntie from the 1960s trying to 'fit in'... and with so many fabulous, un-bling Indian clothes to choose from!”

Now here's the thing. Less physically blessed women like me or Oprah or so many others who do not have the most ideal height or physique or sexiness have to worry a lot about what would suit us. Or rather, would we suit this or that!

But not quite Priyanka Chopra! She can carry off most things with so much panache. In fact, Priyanka wears both Indian and western outfits with such élan that she instantly becomes a role model for a million fashoinistas around the globe.

So what went wrong at Meghan — her friend's wedding? Especially when Priyanka could have the world to choose from and knew about the grand occasion for so long, longer than most common folk! 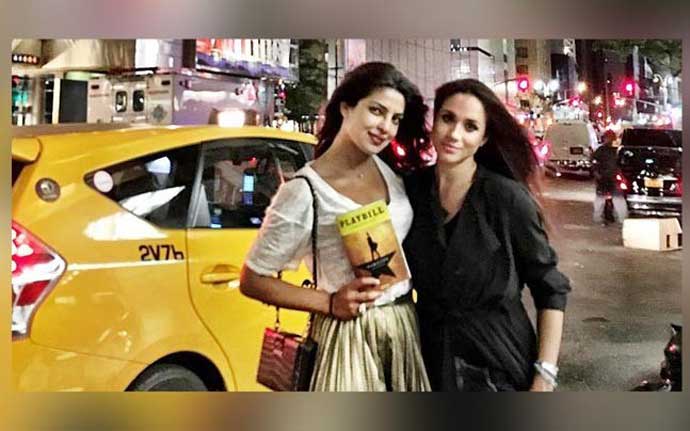 She could have worn a fusion wear from the likes of Abu Jani and Sandeep Khosla, Rohit Bal, Sabyasachi Mukherjee or even Prabal Gurung, Ritu Beri or Rina Dhaka, made in rich Indian fabric, embroidery, design and style.

I am also of the strong belief that celebrities should be with a conscience and do their bit at every opportunity. This was a big one for Priyanka Chopra. I am all for letting people be. But these things should and do come from within. In fact, it is very Maslowian to start thinking of bigger causes (your people, your country, the world, the universe, the earth) once we have covered the first few rungs of basic needs, security, social relevance, wealth, fame etc on Maslow’s Pyramid.

As a matter of fact, a handful of celebrities, even from the world of cinema, have set wonderful examples on this point for us to emulate. And for that I really admire Oprah Winfrey in spite of what her detractors would say. The global queen of media has used her earlier highly successful and watched eponymous show and not missed most opportunities to talk about race, women, health, weight, rape, inclusion, global warming, organic eating and a zillion other things. So here’s the “heart hashtag” I’d like to see in most people of high influence — #CelebritywithaConscience.

An old colleague, completely in dissonance with my Facebook post and quite irked by the whole discussion said, “She is an Indian who is famous and attending the royal wedding on a personal invite. Priyanka is not leading the Indian Olympic squad and does not have to represent India in her clothes or anything!”

See, that’s the point. Priyanka didn’t have to and she did not. But she could have. She had one hell of an opportune moment to play her India hand and put Indian fashion and fabrics and design sensibilities and Indian fashion designers on the world map. That would have been one hell of a service to her country of origin. 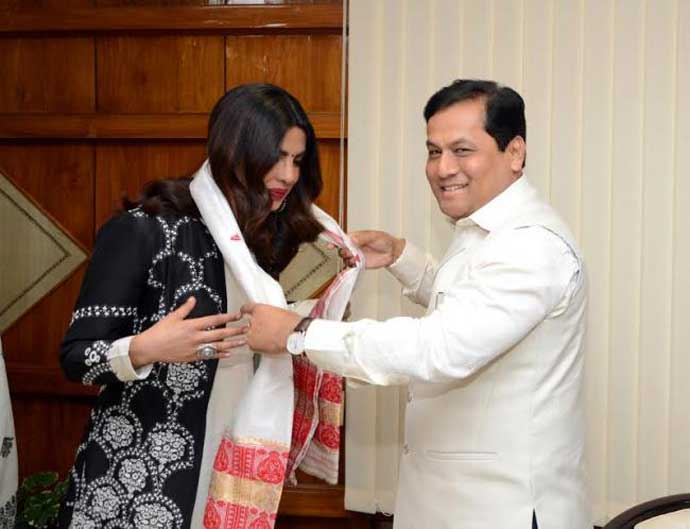 Incidentally, Priyanka Chopra is an ambassador of Assam, the wondrous northeastern state with so much to offer. Photo: Screengrab/YouTube

Incidentally, Priyanka Chopra is an ambassador of Assam, the wondrous northeastern state with so much to offer. Here was her chance to show off the rich textile and design heritage of this remarkable state; on a world platform with billion eyes glued on to the ceremony. What a great endorsement that would have been!

A friend from the Northeast shared my sentiment and commented, “We have brilliant fashion designers in Assam who are designing fusion dresses with our Assam silk and other fabrics. She could have even worn our mekhla sador to showcase our rich culture and heritage.”

A very erudite and wise Delhi University professor friend, whose opinion I always value, had this to say, “Let's cut to the chase. She looks sloppy. And almost grateful she made the list. And so she went with the Astor look. Muga or paat (Assam) with an Indian designer at work would have been so much more chic. So in it and also so sublimely confident!”

On the personal PR front too, Priyanka lost out here. A dress decision around what is being suggested above would have easily got her favourable reviews and given her so many media pegs to talk about both in Indian and International media. The stories and sub-stories around her “royal wedding” breathtaking attire that also underlined her rooted allegiance would have stayed alive on the networks and in people’s minds for a long, long time.

So, it is sad also to see her PR machinery miss out on this media relations opportunity that had potential to become a huge talking affair. 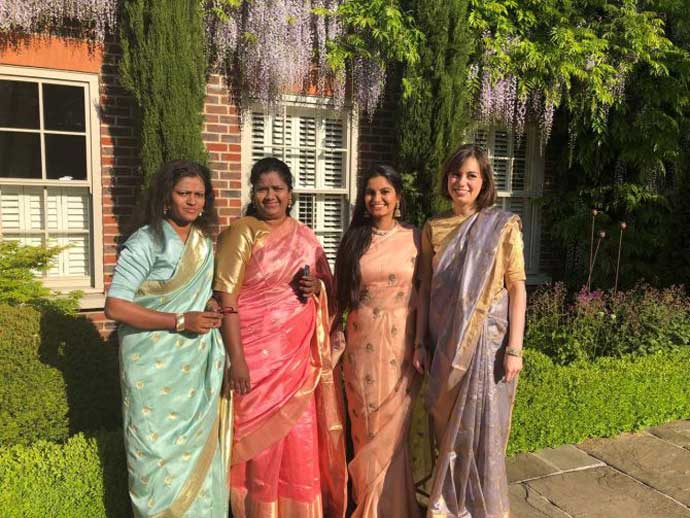 A friend who used to work with the International AIDS Vaccine Initiative had a similar opinion. “I agree with your point on being Indian, being creative and while maintaining your newly acquired international avatar ensuring you remain a brand for your roots,” she added.

In direct contrast to Priyanka’s decision, there were four lovely women turning heads, catching eyeballs, enjoying media presence and gathering appreciative glances and feedback with theirs. Activist Suhani Jalota, founder of Myna Mahila Foundation, attended the royal wedding of Prince Harry and Meghan Markle along with her foundation members — Archana Ambre, Deborah Das and Imogen Mansfield. The four women, in their rich colour palette and fabrics from the Indian design house “Raw Mango”, looked heavenly and stood out amidst the very A-list crowd that really turned up in their very expensive and designer best. 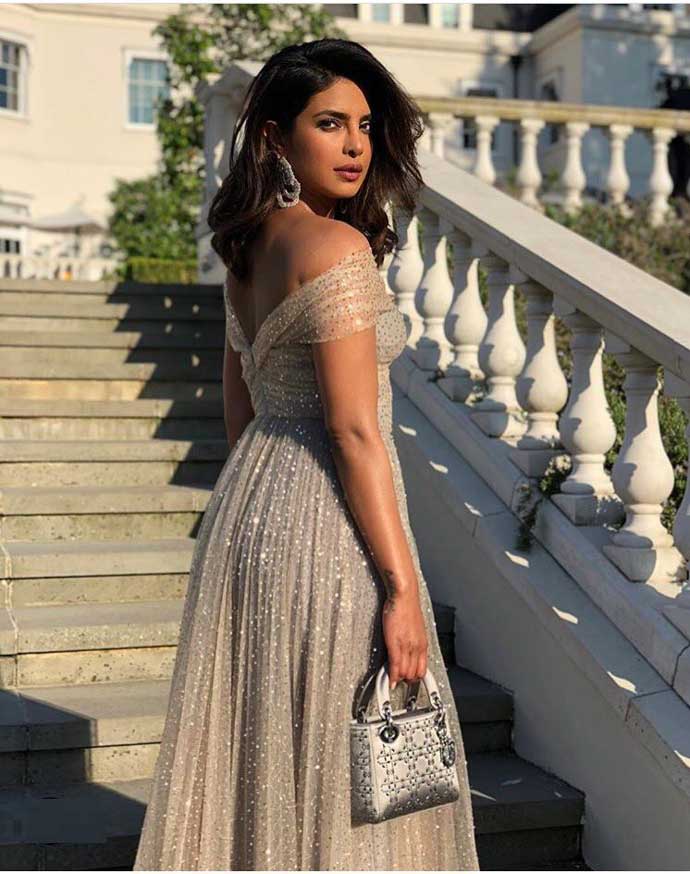 Priyanka could have asked her stylist to think out of the box and plan out a fusion wear with which she could have donned a hat or a fascinator ably; if that was the deciding matter.

You see, Priyanka does not have to try to fit in anymore. From what I see on YouTube, she is the darling of the Indian media and has maneuvered around the US media extremely well, with most snippets on her coming out as complimentary. Many more people recognise Priyanka internationally now, so the pressure is off her somewhat, then what it was way back in her Boston days or even when she started out this time in the US of A.

Though Priyanka looked more feminine and much nicer at the reception, sorely the Indian feel was again missing. And I think, somebody like her is just in that enviable position to clinch the “awesome” India card, each time we have the world watching one of us. 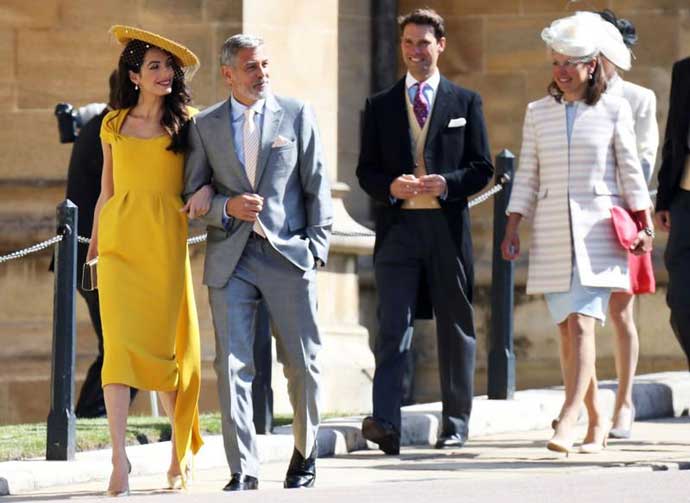 Even other high-profile guests like Amal Clooney were there — but we do not see or hear any of them milk the Markle cow so much. Photo: Reuters

Unfortunately for Priyanka, who normally handles her celeb avatar very well, there are several people commenting that this time she showed a “wannabe White mentality,” and I guess they are not farther from the truth of the matter.

Finally, we all know Meghan Markle is a friend of hers. We know it because Priyanka has said it enough times, at every given or ungiven opportunity — to Jimmy Fallon or Kimmel or countless other hosts, on her Instagram page and wherever else she could plug it. Now I want to hear Meghan rant about that a bit.

One friend hastened to share with me TIME Magazine’s 100 Most Influential People series in which Meghan Markle chose to talk about Priyanka Chopra. Well, that is Meghan - 1 and PC - perhaps 100, to put a scorecard to it.

See, even Oprah Winfrey, Posh Spice, the Suits clan, Meghan Markle’s other fellow cast and crew, Amal Clooney were all there, but we do not see or hear any of them milk the Markle cow so much.

Priyanka Chopra’s PR team has done some good work for her around the Meghan link with the US media. Let's put it to rest and allow Meghan to be a private person that she will yearn to be now!