The perfect khichdi: A dish that opens the door to a Rampuri's heart

To refuse a Khichdi Dawat in Rampur is to rebuff an extended arm of friendship. What makes this urad daal and rice dish so iconic though?

I’m a khichdi-challenged Rampuri in the land of urad khichdi fanatics. I can never get this boiled-split urad dal and rice dish — which is the staple winter afternoon diet of  Rampuri Muslims across all social strata. The non-Muslims are less devoted to it. It is what sarson ka saag and makki ki roti is to the Punjabis. Though, even that is not eaten nearly every day throughout winters.

Enter any Rampuri home in the old city at lunchtime — and you’ll find a piping hot khichdi lunch in progress, with condiments according to the station. It is a late breakfast meal for the male members before they depart for work or a lazy lunch before a siesta in the sun.

My mother can never get over my gastronomic abnormality every winter. I think the surprise is less due to intentional amnesia than the belief that I will get over this unnatural repugnance. I can only blame it on my non-Rampuri father who ate it reluctantly, saying it was the condiments and the accompanying dishes that gave it any taste. A chronic conformist, I trudge along with my khichdi-loving Rampuri husband to khichdi dawats.

Let’s say that khichdi in winters has a more social life than yakhni pulao.

A khichdi dawat has a number of subtexts and social layering.

It implies a certain amount of closeness, a bond, a gentle mix of informality and hospitality. Close friends often invite themselves over for khichdi — this is highly appreciated and indicative of deep kinship. The newlywed groom, after numerous lavish dinners, finally becomes a part of the family when he is invited to khichdi at his in-laws' place.

To refuse a khichdi dawat is tantamount to rebuffing an extended arm of friendship and bonhomie — to confess a distaste for the dish would be social death. Tongue-in-cheek remarks would echo down generations — the label of being too snobbish and angrez would stick forever.

We have had some vegetarians welcomed with open arms into the family because they, at least, cook meat. But a khichdi-denier is never pardoned.

So, khichdi it is — throughout winters within the loving, informal ambit of Rampuriyat with fingers, glistening with ghee, dipping into mounds of khichdi.

Luckily, when they mean a khichdi meal, it includes gobhi gosht, saag kofta, keema and chicken curry along with a host of condiments — chutney, dahi bada, mooli achaar, ghee and til oil. Khichdi is just the base and you can flavour it with different combinations.

I disguise my aberration by piling curries — on a tiny spoonful of khichdi. The perfect combination is achieved with gobhi gosht, a thick, gooey curry made of meat, cauliflower and a little spinach. The slightly zesty taste of cauliflower and meat combo gently adds character to the gingery, bland khichdi. Spoonfuls of ghee or til oil and the tangy mooli achaar slices round off the taste. 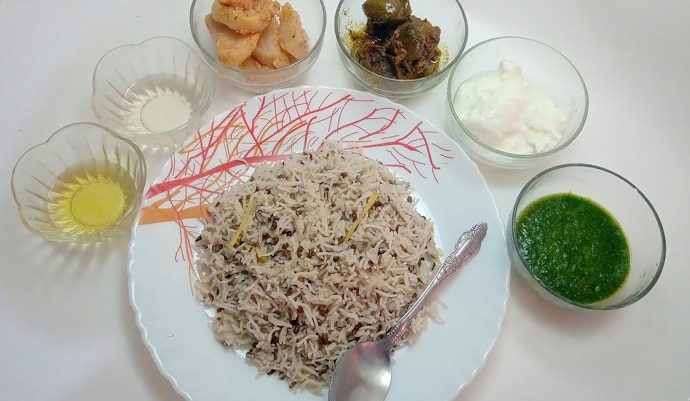 The Rampuri khichdi has a more social life than yakhni pulao in winters! (Source: YouTube Screengrab)

I discovered elaborate versions of the humble khichdi in a Persian manuscript on Rampuri cuisine. There used to be a ‘khichdi pulao’ which had meat cooked with spices (yakhni) and married to the moong dal khichdi. Similarly, recipes of dhuli khichdi and muqasshar khichdi have moong pulses, rice and meat cooked with ghee and spices. The Gujarati khichdi and bhuni khichdi were the meatless khichdis of the time.

The most interesting recipe is of khichdi Daud Khani — probably named after Daud Khan, the first Rohilla chieftain who established the Rohilla empire. This consists of moong pulses, rice, mincemeat, spinach and eggs — a complete meal for a warrior!

All the styles of khichdi described in the manuscript have a mixture of moong dal and rice as the khichdi base, tempered with ghee and spices.

There is no doubt that the Nawabs of Rampur loved khichdi — the simple variety.

My grandfather-in-law, the Chief Secretary of Nawab Raza Ali Khan (1930-1947), was sometimes called for a khichdi meal at around 3 a.m.! The Nawabs stayed up at the night, entertained by music and dance mehfils. To refuse a khichdi dawat is tantamount to rebuffing an extended arm of friendship. A khichdi-denier is never pardoned. (Photo: Nishwan Rasool)

An interesting account of Nawab Hamid Ali Khan (1891-1930) is narrated by Sayed Muhammad Yameen in Urdu Digest (Feb 1968 issue) which was recounted by his father-in-law — Colonel Sayed Ahmad Hashmi — posted at the Rampur court.

The story goes that once Nawab Hamid Ali Khan was eating biryani and found a piece of bone in the rice. A jamadar used to be present at the meal with a whip and a Maulvi recited the bismillah prayer at every morsel the Nawab raised to the royal lips. The biryani cook was summoned and whipped for his carelessness.

On another day, the Nawab was partaking of his favourite khichdi. He appreciated the dish and called the cook to reward him — it was the same biryani cook who had been whipped. The cook, declining a monetary reward for his work, apparently said, "Huzoor, my father was the biryani cook at your grandfather — Nawab Kalbey Ali Khan’s court. Once he cooked khichdi for Sir Sayed Ahmad Khan (the founder of Aligarh Muslim University) who was a state guest. Nawab Kalbey Ali Khan wanted to reward him, so my father requested that he had four sons and he wanted that three of them should be educated at Aligarh Muslim University by the State, and one would continue to serve His Highness. So I stayed back to learn the skills of my father and serve your Highness. Now I have four sons too, and I request your Highness to give me the same reward for my khichdi."

After confirming the story, the Nawab sent the cook’s three sons to Aligarh Muslim University.

In Rampur, they say, fortunes can change with the perfect khichdi.

The traditional khichdi eating can only begin when freshly harvested rice and urad dal become available. The new rice is softer and has to be cooked with very little water and there is an edge to the new urad dal. Some Rampuris are so loyal to the dish that they start eating khichdi from late September and gorge on it till April — it is considered too heavy for summer meals. But before the khichdi season is declared open, the lady of the house has to prepare the mooli achar — which consists of boiled slices of radish in spicy water, kept in the sun till it matures and the mustard seeds release their sharp flavour. The mooli slices and the marinade are also mixed into the hot khichdi — the water gulped down after the meal for digestion. 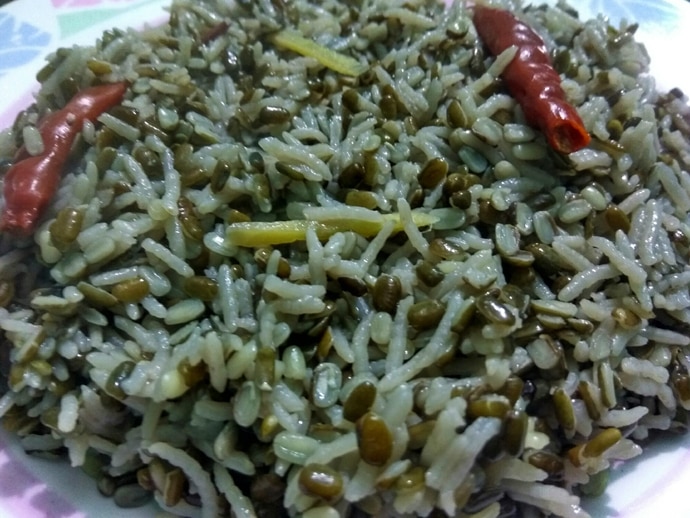 The Rampuris — who are forced to leave this land of winter khichdi — complain that khichdi never tastes the same abroad. Even Delhi is pardes.

I remember that freshly harvested rice and urad dal used to be brought from Rampur when my family migrated to Aligarh. The true devotees even carry water in large plastic jars for, they believe, that the taste of khichdi is enhanced by Rampuri water.

Interestingly, the urad dal khichdi is only confined to the erstwhile Rohilla Pathan belt which includes Sambhal, Moradabad, Bareilly and Shahjahanpur. Moong and arhar dal khichdis are more common in other parts of the country.

Today, Rampuri khichdi consists of rice and urad dal boiled with salt, dried peeli mirch and slivers of ginger. It is a simple, unpretentious and from-the-heart dish in itself. No oil or spices are ever used. But the proportion of rice and urad dal, and the skill of preparing it — so that each grain is separate from the other — comes after years of practice.

Till the 1980s, khichdi was only cooked with ‘tilak chandan’ rice — a highly aromatic small grained local variety, which has become extinct now with the increasing popularity of the high yielding hybrid varieties. Old-timers yearn for the aroma of the tilak chandan rice which announced that khichdi was on the boil. In olden days, khichdi had a greater bonding effect for it was served in a large, round clay dish with dollops of ghee buried into its centre. Three or four people sat around it on the dastarkhwan and ate with the ghee or oil percolating down the edges — frantically mixing chutney, mooli achar and gobhi gosht before it turned cold.

On my assignment as a senior school teacher, I found students enjoying a khichdi dawat during the lunch break in class, with khichdi in casseroles complete with condiments and gobhi gosht.

That was one cheeky invite I could turn down.

#Nawab cuisine, #Traditional dish, #Khichdi, #Rampur
The views and opinions expressed in this article are those of the authors and do not necessarily reflect the official policy or position of DailyO.in or the India Today Group. The writers are solely responsible for any claims arising out of the contents of this article.