The story had potential, the cinematography was impressive, yet the film failed to tie it all together. I'm going with 1.5 stars out of 5.

As a once-upon-a-time fan of John Abraham, when the opportunity to catch the first-day-first-show of Romeo Akbar Walter (RAW) presented itself, I grabbed it. It took me 30 minutes into the film to start regretting it.

Most cinemagoers had realised a long time ago that John cannot emote to save his life. John, however, is in denial. RAW, being the story of a spy, sort of benefitted in some places from his forever emotionless face. But in particularly emotional scenes, it stuck out like a sore thumb.

John, over the years, has carved a niche for himself in Bollywood — whether successfully is a matter of debate. From Madras Cafe to Satyamev Jayate, we've seen his chiselled body in only patriotic films — no, we are not complaining. But that has finally become a disadvantage for him. It seems like he is still stuck in the same character, playing it over and over again to get it right the next time, but failing.

As the audience, it is boring.

Romeo Ali (John) is a bank employee in India and lives with his mother Waheeda (Alka Amin). Though he always nurses this desire to fight for the country, like his father, his overprotective mother, and her grief of losing her husband to war, stops him. He is finally recruited by Shrikant Rao (Jackie) as a spy and sent to Pakistan. Akbar and Walter are his spy names.

Jackie Shroff seems to have been given the instruction to look stern — you're a RAW chief, you better look the part.

Unfortunately, that stiffness was a bit much in many places. We're not sure if RAW chiefs actually look that menacing.

Mouni Roy was used pretty much as garnish — after a little more substantial role in Gold opposite Akshay Kumar, this was a raw deal for her. (Oops!) 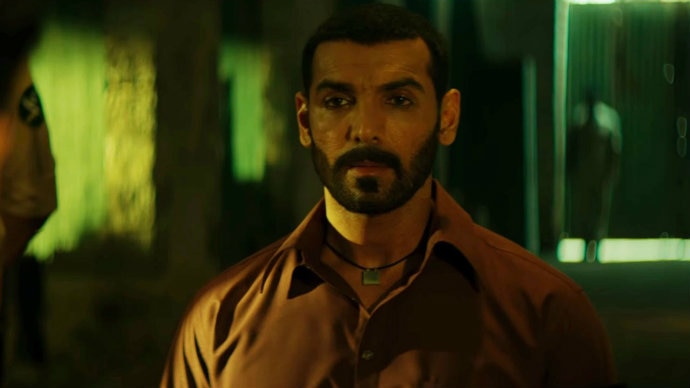 Sikander Kher, however, was outstanding. Anybody who happens to find themselves in the theatre watching this movie would probably stick around only for this guy.

But the acting aside, the real problem with the film is its screenplay. It is slow, often boring, seems to stretch too long, but even then, nothing much happens. A man is chosen to be a spy but no screen time was spent in showing how he was trained. Pep talks in Jackie Shroff's grave voice aren't enough to prepare someone to face the enemy country.

The cinematography and the framing, however, are quite good. The film is set in 1971, with palpable tension between India and Pakistan at the backdrop. Spies from both countries are infiltrating the other, which means there is an obvious life risk. Each frame sort of captures that grimness in the air — dark, grungy, scary.

If only the story was tighter to compliment the picturisation.

There was a time when I was certain I'd walk out of the theatre. But I am glad I didn't. The ending, sort of, helps redeem the film — though not entirely. But with a little over two and a half hours of run time, the wait to the end feels almost never-ending.

There is one thing that works in favour of RAW — the delay in the release of the Vivek Oberoi starrer, PM Narendra Modi. Which has ensured RAW gets a solo release, with only No Fathers In Kashmir to compete with. That will surely help the business.

As a fan, however, I'd perhaps still go for another John movie, even if it is only to regret immediately. For this one, I'm going with 1.5 stars out of 5.

Post your comment
#Mouni roy, #Jackie shroff, #John Abraham, #RAW
The views and opinions expressed in this article are those of the authors and do not necessarily reflect the official policy or position of DailyO.in or the India Today Group. The writers are solely responsible for any claims arising out of the contents of this article.