His rejection of the mindset that is at work to cleanse the country of dissent and diversity is based on Pakistan's rich past that transcends national boundaries.

To many conspiracy theorists who peddle raw, half-baked and pernicious versions of national ideologies on social media — the most popular medium of being connected with the world in early 21st century — Raza Rumi is an enigma at best and a liberal Pakistani who is embarrassed by his national identity at worst. 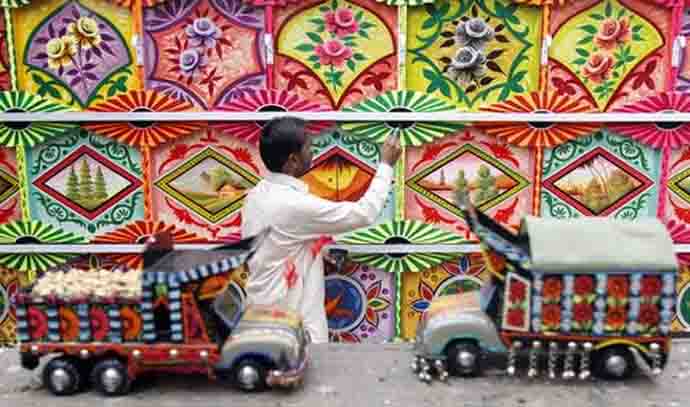 Of shared cultures and entwined destinies: An artist from Pakistan paints a platform for Durga Puja. (Credit: Reuters file)

For someone who has a foot entrenched firmly in history and who believes in the futility and dangers of hyper-nationalism, Raza has to contend himself with scathing and uncouth comments and remarks, some barely attempting to hide their glee at him being painted as someone who has his head permanently and irretrievably turned backwards, in other words, towards pre-Partition subcontinent, an age most Pakistanis would conveniently treat as their forgettable past. One nation, one religion versus art, culture and literature born out of ethnic, religious and linguistic diversity. (Credit: Reuters photo)

His perpetual angst to reject the over simplified but for six decades politically correct state narrative of one nation, one religion description of Pakistan and unveil the vast wealth of art, culture, literature and music which is born out of ethnic, religious and linguistic diversity has no happy ending, it seems.

His rejection of the mindset that is assiduously at work round the clock to ethnically cleanse the country of dissent and diversity but in a seemingly benevolent way — erroneously believed by those who practice it — is based upon the rich past and its incessant reincarnations in the present makes Pakistan a kaleidoscope of spellbinding art, poetry, customs, music and languages that transcend national boundaries.

Raza Rumi’s love and quest to find his national and regional/South Asian identity was clearly manifest in his seminal 2014 book, Delhi by Heart, which deceptively sounded like a travelogue of a Pakistani visiting India, particularly Delhi. The nexus he managed to create in the book — which has existed for thousands of years, quite frankly — between India and Pakistan was thoroughly misunderstood by the merchants and protectors of our national ideology. It is not difficult to imagine the furrowed foreheads and flushed cheeks of those who may have viewed the book as softening or even removing the international boundary between India and Pakistan, completely missing the point that bringing countries closer through shared culture and history is positively natural and evolutionary whereas nation-building on differences is reactionary and negative. Sadly, the trend continues unabated.

Being Pakistani, Society Culture and the Arts is an effort by Raza to reassure himself and his readers of the pluralistic viewpoint he holds about the country of his birth yet again. Irked by the linear and disingenuously one-sided and, consequently damaging, image of Pakistan, Rumi through a compilation of very pertinent and timeless essays, painstakingly describes plurality and diversity of his misperceived homeland to audiences across the world.

For instance, during one of his sojourns to Bangladesh he is fascinated to find out the Bengalis’ love for their culture, the Bengali identity and, above all, Rabindranath Tagore, whose poetry they memorise and recite despite Tagore being “religiously different” from a majority of the Bangladeshis. Frequently faced with the "what if" moments of history, Rumi wonders what if Muhammad Ali Jinnah had lived long enough to admit his mistake of imposing the Urdu language on East Pakistan which he believes was a distinct possibility considering Jinnah’s democratic and constitutional approach. Being Pakistani: Society, Culture and the Arts by Raza Rumi, HarperCollins India.

Similar to the Tagore phenomenon in the whole of Bengal, another example of cross-border following and, more importantly, the ownership of syncretic message in the poetry of Muslim Sufi ascetics like Bulleh Shah, Baba Farid, Shah Hussain and others by Sikhs via Guru Granth Sahib proves that the rich sub-continental heritage is timeless and is not bound by physical boundaries and transcends religions.

In one of the essays, while celebrating the “forbidden” literature about courtesans of the sub-continent or the so-called nautch girls, Raza throws light on the ‘righteous segregation’ of the red light areas in South Asia and the societal disdain and rejection of this invisible class. Ghulam Abbas’s short story, Anandi — later made into a remarkable movie named Mandi (marketplace) by Shyam Benegal — is a painful and yet quintessentially sub-continental moralist hypocrisy.

The enthusiastic, self-righteous witch-hunt of an inquisition aimed at segregating and fencing against the ‘dirty’ segment of the society often results in the mushrooming of temples, dargahs, land mafia and the trader class baying for the prostitutes’ blood, once again uprooting and exiling them to yet another abode set in forced seclusion and wilderness.

In Pakistan’s case the cycle — set in motion by the hyper-conservative regime of Zia-ul-Haq — continues with increased vengeance with the passage of time fuelled by faux moral and religious fervour. The same uber-religiosity is also reserved, it has to be said, in order to persecute religious minorities, a fascistic tool — quite disturbingly, it has to be said — also rapidly being pressed into service across the border in India, of late. 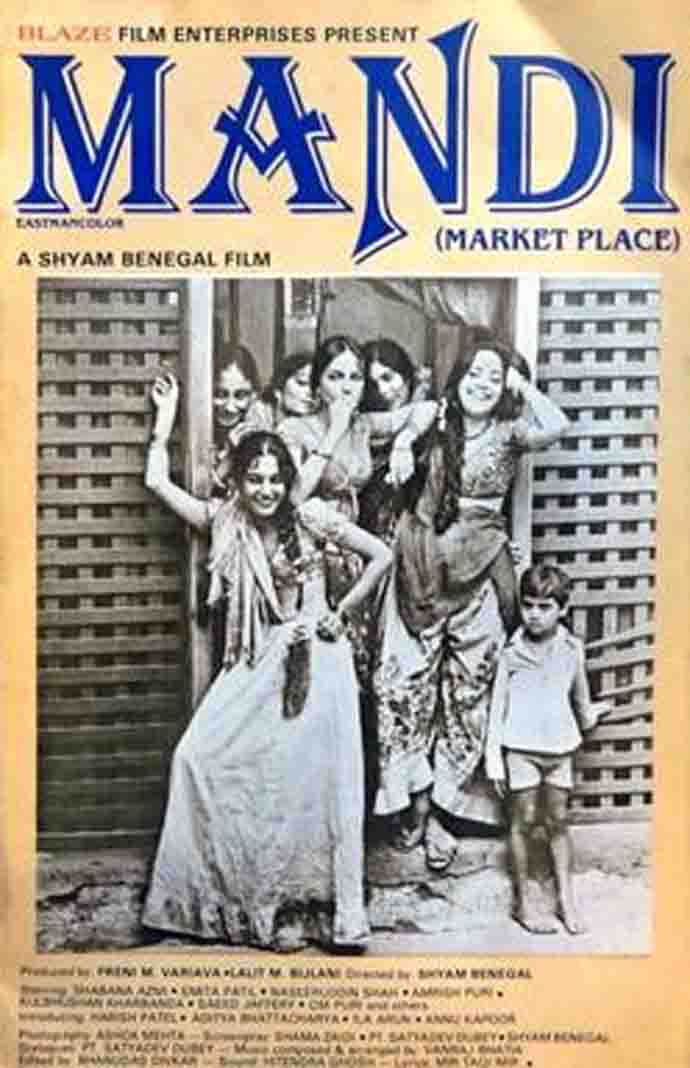 Raza Rumi’s personal experience of forced emigration and the consequent yearning and longing it has generated within his soul for a reunion with the land of his birth is also reflected in the careful selection of essays in Being Pakistani. For example, the moving story of poet Mustafa Zaidi — amongst many a dissident literary figures like Faiz and Jalib who can be described as classic misfits in a repressed and generally indifferent society — needs a mention here who was ‘purged’ for non-conformity by Yahya Khan along with 303 bureaucrats.

Raza briefly unveils the poetic genius of Zaidi while lamenting the fact that the first PhD on his work was commissioned abroad. Circumstances surrounding his tragic and yet mysterious death remain unexplained to this day.

Despite the pigeon-holing and labelling of dissident and evocative art and literature as patriotic or otherwise being a sub-continental characteristic in general, drawing of deeper lines and boundaries on creative and political thought is more pronounced in Pakistan as compared to India and Bangladesh, Rumi tells us. Despite the fast-shrinking spaces for expression, the rich folklore of the land that is Pakistan lives on and which, despite a thousand state narratives targeted to create uniformity of culture, is thankfully a part of its peoples’ soul.

There are stirring examples and impressive protagonists of history like Marvi of Sindh whose indomitable will despite her incarceration by Umer for a year was immortalised by Shah Latif:

Only the shameless can forget the beloved and homeland,

Condemned are those who forget the motherland.

In a vibrant country brimming with cultural richness and with a talented and successful diaspora willing to make Pakistan a progressive and prosperous country, the emphasis seems to be on pocketing their dollars to build dams rather than attracting academic excellence, which can be of immense benefit to the country in the long-term. 'Only the shameless can forget the beloved and the homeland'. A painting of Shah Latif. (Credit: Wikimedia Commons)

Our judiciary — instead of embarking upon open-ended, futile and time-consuming fishing expeditions to bring back ‘corrupt’ politicians — can take a leaf out of the Supreme Court of Bangladesh which has revered the country to being a secular republic.

In addition, radical Islamist literature has been banned while there seems no end to the publication of hate material in Pakistan.

It cannot just be fate which has forced Pakistan to be driven away from Jinnah’s ideal state.

Bangladesh, which waged a struggle to free itself from us, ironically, seems to have embraced Jinnah’s message by striving to be democratic, developmental, liberal and secular.

Pakistan, well, looks and desperately wants to be exactly the opposite as we speak.

Also read: Asia Bibi verdict: What is happening in Pakistan now is blasphemy

#Hyper nationalism, #Books, #Pakistan, #Raza Rumi
The views and opinions expressed in this article are those of the authors and do not necessarily reflect the official policy or position of DailyO.in or the India Today Group. The writers are solely responsible for any claims arising out of the contents of this article.