Re-examining ways to ‘know’ the Mahābhārata: Indology and beyond

One of the key skills budding academics are encouraged to develop when they embark on their course of study is epistemic vigilance. When we read a primary text or secondary sources we ought to inform ourselves meaningfully of biases and prejudices. Of agendas, overt or hidden.

How do we know what is being said is "true"? For everyone has an objective in mind when selecting information and presenting it- including me in this article.

Presentations of Indian history and religion in the last few centuries are prime examples. While Mughal chroniclers naturally lauded their masters, British colonial representations were driven by the need to make “native Indian subjects more sensible of the immense advantage accruing to them under the mildness and equity… [of British rule].”

In this politically charged sea of academic discourse and under the tutelage of an extremely committed German Indologist, I have been partial to the narrative of German Indology – since I felt it did not have a colonial (or any) axe to grind.

This belief of mine is set to be challenged by a course organised by the Indic Academy at the Indira Gandhi National Centre for the Arts (IGNCA), in Delhi later this month. The course will be conducted by Proffesor Vishwa Adluri and Dr Joydeep Bagchee, authors of the acclaimed book The Nay Science: A History of German Indology. 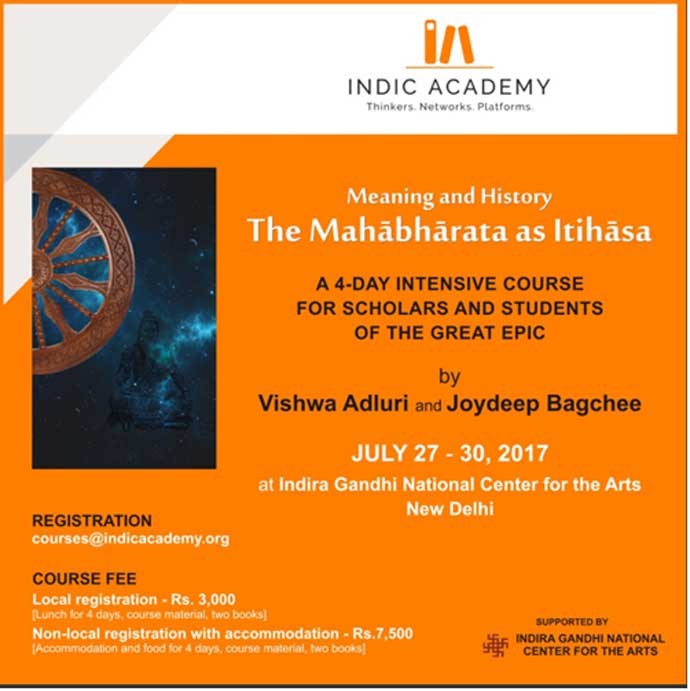 Indic Academy is organising 'Meaning and History: The Mahabharta as Itihasa' at IGNCA from July 27.

“This book is the most devastating criticism of Indology and the historical-critical method till date", says Srinivas Udumudi, director - academics at the Indic Academy.

“The authors are uniquely qualified to conduct a course like this – they are accomplished philosophers in the Western Continental tradition, have studied the history of Christian theology, Ancient Greek classics as well as Indian texts deeply. They have made major contribution to Mahābhārata studies – working in English, German, French, Ancient Greek and Sanskrit languages,” Udumudi adds.

Given its scope and the reputation of the conducting scholars, this course is the first of its kind in India. It aims to examine streams of Indology critically before delving into the philosophy of the Mahābhārata.

“This has obvious relevance to all such Indian texts and not just the Mahābhārata, and for a philosophical overcoming of Indology itself,” Udumudi explains.

Although the course is aimed at scholars and students, it is open to all enthusiasts of ancient Indian texts who wish to understand textual criticism and gain deep philosophical insights from the epic, and its most famous component, the Bhagavadgītā.

The course, which runs for four days will begin with an outline of critical approaches to the Mahābhārata including the role of western critics; a look at Mahābhārata as history; an examination of the Aryan Invasion and Inversion Hypothesis and finally criticisms of tradition and “Brahmanic” Hinduism.

Day two, which I am keenly looking forward to, will begin with an introduction to German Indology, followed by a look at secular criticism and their theological sources. Attendees will then be taught about textual criticism and higher criticism, and finally will be given an understanding of what the critical edition of the Mahābhārata is.

Day three is devoted to the Bhagavadgītā, including a search for an Ur-Gītā layers within the Gītā and something termed the "German Gītā" which I am very curious to learn about. The final session will concern a rejection of the commentarial tradition.

The last day is devoted to interpreting the Mahābhārata and will cover the many senses of dharma, front-end materials of the Ādiparvan, Nārāyaṇīya and Bhakti, and closes with a session termed Vasu and Double Transcendence, which again will be new learning for someone like me.

I ask what the objective of the course is. Udumudi is crystal clear and expansive in his articulation. “We want the audience to understand the methods employed by Indologists. They insert themselves between the text and the reader - positioning themselves as authorities, determining who wrote the text (author), why the text was written (authorial intention), when the text was written (dating and chronology), what the “correct” content of the text is (what content is interpolation and what is not, creating a “critical edition”), and eventually - how the text should be read (its meaning).”

This leads to a more meaningful goal. “Finally, we want the participants to get beyond all these historical and "critical" interpretations, get to the text itself, and start appreciating its literary and philosophical depth. We want participants not see Mahābhārata as just a chaotic accrual of stories and didactic episodes over a period of time. We want them to see the narrative structure of the epic as a whole and understand the beauty of its plan,” Udumudi concludes.

(Indic Academy is a not-for-profit organisation which supports Indic scholarship by establishing platforms and networks for wider dissemination of ideas.)

Also read: Why are women not allowed to chant or study the Vedas?

#Mahabharat, #Indology
The views and opinions expressed in this article are those of the authors and do not necessarily reflect the official policy or position of DailyO.in or the India Today Group. The writers are solely responsible for any claims arising out of the contents of this article.