Why Śiva is the most mysterious of all Hindu gods

A lot of questions remain unanswered about the widely revered deity.

Of all the deities in the Hindu pantheon, by far the most complex and mysterious to me is Śiva. Devotees and scholars alike have attempted to pierce the shrouds of textual and archaeological history to understand his origin, nature and evolution. Yet he continues to defy comprehension and definition. Some, following John Marshall, have sought him in the phallic emblems, baetyls, seals and sculptures of the Indus Valley Civilisation. Others like Doris Srinivasan place his origins firmly in the early Vedic fold, and in the Vedic deity Rudra. Still others like Phyllis Granoff point to the textual and iconographic chasm between the Vedic Rudra and the classical Śiva, indicating a need for serious contemplation and research to understand how, if indeed they are one and the same deity, the transition and transformation came about.

Rudra’s nature from the early Vedic to the late Vedic period embodies continuities and differences. We find that his benign aspect increasing gradually while his destructive aspect declines, though remains. Rudra of the Ṛgveda is a minor deity, a storm god with just three hymns dedicated to him: 1.114, 2.33 and 6.46. (He appears along with Soma in 1.43 and 6.74). His dual nature is already evident. Prone to anger and quick to dispatch weapons especially arrows against those who enrage him, he is also a deity with healing remedies and a provider of good luck. He is the flame-red boar of heaven, youthful with braided hair, powerful lips, merciful hands, tender-hearted and easy to invoke. Father of the Maruts, dazzling like the bright sun, powerful like a wild beast, swift, with the destructive power of lightning, storm and fire, he is lord of the sacrifice, of song and the physician of physicians. One of the adjectives used for him is indeed śiva (auspicious), but not exclusively. It is used for Agni and Indra and is also the name of a people in the Ṛgveda (7.18.7) The classical iconography (candra, Gaṅgā, liṅga) so familiar to us today is completely absent. 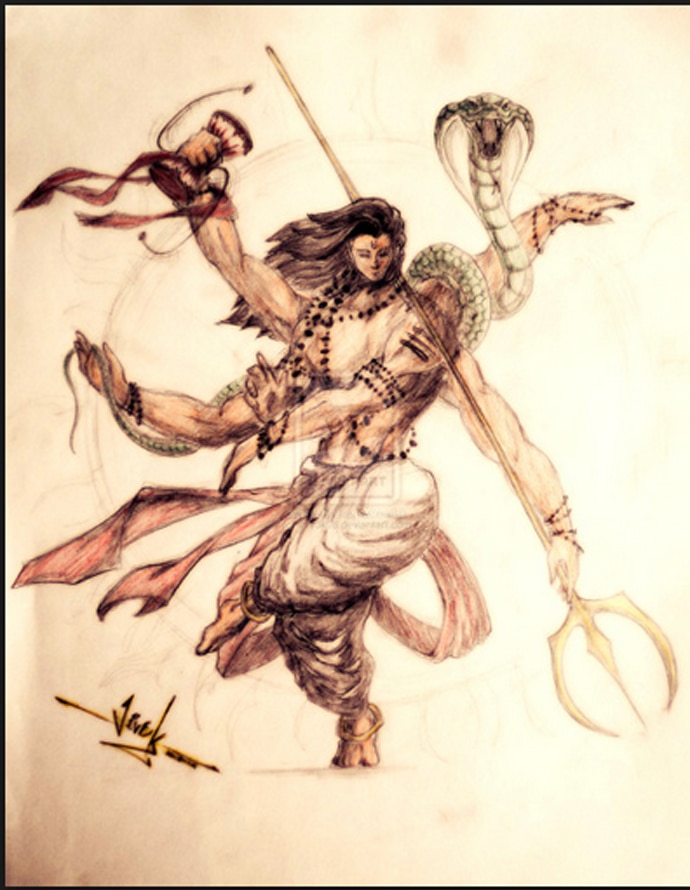 By the time of the composition of the Yajurveda saṃhitas, Rudra has grown tremendously in stature. His importance and physical appearance in the minds of the ṛṣis has changed. Now he is clad in skin, dwells in the mountains, is aged and has a thousand eyes. Ambika is mentioned for the first time in the Vedic corpus at this stage, not as his wife, but as his sister. In what J Bruce Long calls the "embodiment of divine ambivalence", both the auspicious (śiva) as well as malevolent (rudra) aspects are developed in the renowned Śatarudriya prayer which occurs in the kṛṣṇa Yajurveda and with some modification in the śukla Yajurveda. From being a minor atmospheric deity in the Ṛg saṃhita, he has become Viśvarūpa and his presence can be felt in streams, ponds, banks, on the road, on barren land, in the cow pen, in the heart the whirlpool, in the dust and mist.

Now addressed as Nīlagrīva, Śitikanṭha, Giriśaya (mountain dweller), Viṣāpaharaṇa (one on whom the deadliest poison has no effect), and Paśupati, he is the lord of the forests, trees, fields and plants. In the Śatarudriya is also evident his all-inclusive divinity which is extended to wanderers, thieves, tricksters, robbers and pilferers. His Rudras/gaṇapatis are the lords of carpenters, potters, blacksmiths, fishermen, hunters and the Niṣādas, a non-Vedic tribe. While the Śatarudriya becomes a central text in the worship of the Purāṇic Śiva centuries later, there are just as many features that are unfamiliar (as are familiar) to the devotee who reads it for the first time. For instance, Rudra as Rathapati (lord of chariots), Harikeśa (one who has green hair/green leaves as hair), Kūpya (of the well) and Avaṭya (of the pit/hole).

The Atharvaveda represents a further stage of elevation for the Vedic Rudra. Book XV of this saṃhita identifies him with all of creation in a language which is distinctly Vedic but addresses the deity as Eka-vrātya, vrātyas being not of the ārya community. (Read the first few hymns, or the whole book in translation here. He becomes Mahādeva and holds the bow of Indra, erstwhile chief of the Vedic gods. The texts speak of seven attendants of this deity including Bhava, Īśāna, Paśupati, Śarva, Ugra, Rudra and Mahādeva. They are apart, yet a part of him – a theme which Phyllis Granoff takes up in her research on later developments in the persona of Śiva. Rudra/Mahādeva/Eka-Vrātya is fond of strong sura and shares a special relationship with a puṁścalī (a harlot, lit one who goes after men) but also becomes one with all that the ārya hold pure. Varuṇa, Soma and the seven ṛṣis follow him; hymns like rathantara and brihat follow him, as do the ādityas, and viśvedevas. Mahadev Chakravarti posits the theory that Vedic Rudra is not of ārya origin and that the Atharvaveda represents his increased acceptance by the custodians of the ārya belief system.

The brāhmaṇas progress this continual and by now seemingly unstoppable ascent of Rudra. AB Keith says even the gods are afraid of him by this stage. By the time of the composition of the Śvetāśvatara Upaniṣad (see ŚU 6.18) Rudra has become the one god, the one who creates brahman and bestows the Veda upon him/it. At ŚU 3.2 we encounter a familiar theme: “There is only one Rudra; he has not tolerated a second who would reign over these worlds by his sovereign powers. After drawing in all beings he stands as the protector at the end of time, turning West towards men” Clearly by this period, a cult of Rudra (widely accepted today as a precursor to Śaivism) has been established. Further evidence is to be found in Patañjali’s Mahābhāṣya. Commenting on Pāṇini’s sutra V.2.76, he talks of discreet followers of the deity - Śiva-bhāgavatas, who were āyaḥśūlika (possessing iron spears/lances) and daṇḍājinaka (holders of a staff and wearing animal skin). Patañjali is dated circa second century BCE, while the Śvetāśvatara Upaniṣad is thought to have been composed between the sixth and the fourth century BCE.

He remains connected to the Vedic ritual as can be seen in the śrauta and gṛhya sutras. Over and above that it is recommended that he be adored in practically all walks of life. Śāṅkhāyana gṛhyasutra prescribes Rudra worship to sick people. The Pāraskara gṛhyasutra directs "adoration" when crossing a path, approaching a cross road, swimming across a river, getting into a boat, entering a forest or climbing a mountain, passing by a burial ground or a cow pen. For Rudra clearly has come to inhabit the universe. The Hiraṇyakeśī gṛhyasutra recommends the same if one chances upon a cattle dung heap, is plunged into a river, is near a creeping snake, by a sacrificial site or a big old tree.

So far we have touched upon the trajectory of Rudra in the early and late Vedic texts. As yet there is no consensus as to the origin of this deity. Was he pre-ārya? Was he contemporary but external to the ārya? Was he a mountain or a forest god? A malevolent force of nature? Or was he clearly as ārya as Agni, Vāyu and Soma, as Doris Srinivasan would have us believe? Did he gain all his epithets by absorbing the gods of smaller autochthonous cults? What were the stories that led to his names in the Śatarudriya? We have traversed close to two thousand years of textual history and as yet we haven’t even reached the part where he becomes unequivocally Śiva or Śaṅkara. Hopefully we will get there in Part II of this article, although I must warn you that a lot of questions remain unanswered even today. I urge all to learn Sanskrit, read the Vedic corpus and find your own answers!

#Shiva, #Hindu mythology
The views and opinions expressed in this article are those of the authors and do not necessarily reflect the official policy or position of DailyO.in or the India Today Group. The writers are solely responsible for any claims arising out of the contents of this article.