This is a 'pre-sold' runaway box office success.

Going by the impact of the recently released trailer of the biopic on Sanjay Dutt —  Sanju — this is a pre-sold runaway box office success. There is not a single negative or adverse reaction from anyone in the film industry and every single film personality interviewed has praised it. In fact, we are told that Rishi Kapoor was so emotionally overwhelmed when he saw his son’s performance in the film that Ranbir Kapoor in turn had tears in his eyes at his father’s approval.

Amitabh Bacchan apparently at one point during a scene was confused whether it was the real Sanjay Dutt he was seeing on screen or Ranbir acting as Dutt. Suniel Shetty when asked if there would be a biopic based on his life to which he brushed it off saying he was "not worthy enough". Some might say that was lucky for him, in a way, considering the nature of “ups and downs” in Sanjay’s life (in Hirani’s words) that inspired this film.

Rajkumar Hirani has told the media that before making the film he told Sanjay Dutt that he would not glorify him in any way and the star had agreed. 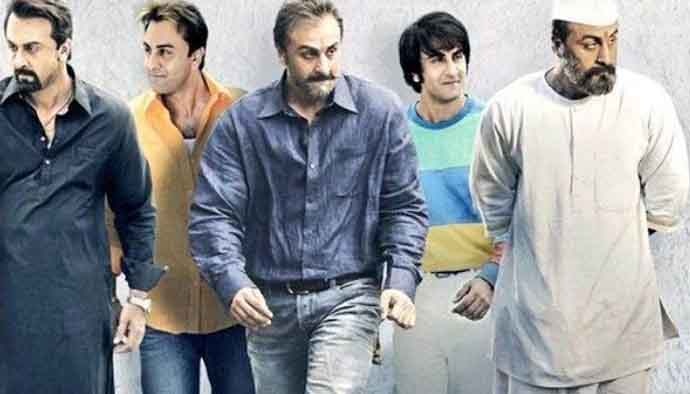 Going by the media coverage and reactions of citizens in the outcome of the Dutt trial, the average person’s knowledge of the law and concept of justice is appalling.

It is, of course, not possible to glorify Sanjay Dutt, but impossible not to love him either. It is his very dysfunctionality that has endeared him to the public, and that we have been avidly following over the years as it has evolved from his alcoholism and drug addiction, his trail of affairs and broken marriages, to his flirting with gangsters that dragged him through a living hell.

As far as the film industry is concerned, Sanjay Dutt has been at the receiving end of a justice system and the infamous TADA that brooks no distinction between a genuine terrorist and an overgrown teenager playing macho and getting thrills out of hiding weapons of his gangster friends. Sanjay Dutt’s long ordeal of walking in and out of police stations, custody, court appearances and incarcerations, for 23 years from his date of arrest in April 1993 has left its scars on his leathery visage. Ranbir may have been able to copy his body language, the slouch, the half-lidded expression and the offhand "tapori" dialogue, but there will always be a yawning chasm between an actor who has experienced none of these things and the subject who has those years seared into his soul.

During the 1980s and 1990s the underworld had Bollywood by the scruff of the neck. If you had to make a film you had to pay homage to the gods of the underworld first. They would finance you, money would get laundered, stars and starlets would go out of the way to “please” a don, shows would take place in Dubai and all the don had to do was pick up a phone and order the star he wanted like picking food off the menu. They’d even tell you the number of songs they wanted in the film and recommend a newbie for your second hero or heroine role.

Bollywood was their playground. As it so often happens, friendships and relationships develop even between the exploiters and exploited when you are mingling so much, and the heady sense of danger and machismo that comes with such friendships. In the climate of this machismo and recklessness the law seems trivial, without teeth, and for lesser people. It would seem perfectly natural for a privileged person inhabiting this universe to hide weapons for his shady friends, no questions asked, and how much he knew or did not know about the purpose of those guns is still hotly debated. It is also natural in this scheme of things for a film star like Salman Khan to go off with some friends on an impromptu safari and casually hunt a few blackbucks. 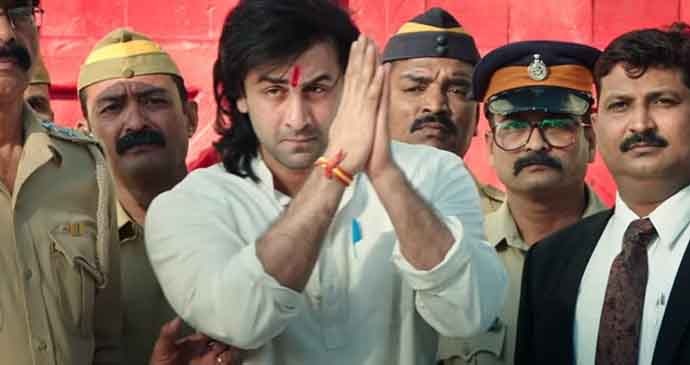 The fanbase and larger social constituency that finds this recklessness and machismo of our filmstars glamorous and an extension of their film personae are more delighted and envious of such conduct than disapproving to say the least. Looking back, one would say that going by the media coverage and reactions of citizens in the outcome of the Dutt trial, the average person’s knowledge of the law and concept of justice is appalling. It is reminiscent of those melodramatic films where the hero shouts, “Suno gaonwalo” and gets a quick-fix solution to his problems from the mandate of an emotional mob in the marketplace. There is no need for hard evidence or rational deliberation.

To them Sanjay’s journey is akin to that of a Greek hero, pitted against the backdrop of fate, going through his hubris and finally meeting his nemesis, only to rise stronger, cleaner and absolved of all stains. However, through all this his machismo remains unaffected, and though penitent and wiser for his experiences, he remains unbowed and intact. The tremendous sympathy and adulation this created contributes to the “aww” sentiment for Sanju baba — a term of endearment that Rajkumar Hirani has consciously used as the title of the film. It is a name that the collective will respond to immediately with moist eyes. It is hardly a “neutral” title as he told the press. No, he does not have to “glorify” him at all.

There is possibly no way that this narrative of Sanjay Dutt can be challenged or questioned in the echo chamber of the Bollywood film industry because everybody wants this horse to win in the first place, and no one wants to stand out like a sore thumb. The mutual “waah” is a given even before the film is released.

If we look at the successive films of Hirani from Munna Bhai MBBS to the present one, two things stand out clearly.

Firstly, the gradual and progressive legitimisation of Hindi cinema’s number 1 enfant terrible. Secondly, the underclass mores that he excelled in portraying, being normalised.

The appeal of Munna Bhai films lies in the lumpen tendency to cock a snook at institutions that challenge their sense of self-worth and evoke awe.

Hence, doctors are called “Mamu” and professors, “notebook” by Munna and his friends and dragged down to their own base level. Very funny, no doubt, but do people realise they are laughing away their own ignorance, and feeling good about the reassurance it brings? Producers who come from privileged backgrounds know this only too well as they have not been brought up on the same fare they serve us poor clods. Populist films are engineered with great science and purpose.

With Lage Raho Munna Bhai, casting a TADA convict as a bhai-turned-messiah and a disciple of Gandhi was not only a great business opportunity, but also possibly premeditated. It therefore came as a relief when a group of Gandhians (the genuine variety) protested the misuse of Gandhiji’s name and legacy in this entire business where much was made of Dutt going to Yerawada jail “following in the footsteps” of the Mahatma.

Bollywood reduces everything to a farce. Farces sell. On the rare occasions it manages to stretch its imagination beyond its staple of shoddy plagiarism, it provides simplistic popcorn solutions to complex socio-economic problems, like “Gandhigiri”. Lage Raho Munna Bhai has served as insurance in troubled times. It bore fruit at last in the sympathy wave that swept the country and washed up against the feet of a judiciary, which was seen to be “harsh”, “inhuman” and “unforgiving.”

There is another interesting aspect to the popularity of Sanjay Dutt that is not exactly kosher. For years, producers have consistently placed him in roles that call for violence and gangsterism because they consider him to be a first-hand “expert” on the underworld and the mannerisms of criminals due to his proximity to them in jail.

Unwittingly perhaps, Dutt has endorsed a certain product in his time — the Don role model — much as say, Sachin or Dravid have promoted a brand of soft drink, and he did it far better than Amitabh Bachchan before him or Shah Rukh Khan after him because he brought dimensions and layers into his roles.

Gandhism has never been so popular among the youth of this country who do not in any case follow Gandhian principles when it comes to conspicuous consumption or untrammelled material ambition. When surveys were carried out in colleges and schools about the relevance of Gandhi, only a few years ago, the responses ranged from the cynical to the lukewarm. However, "Gandhigiri" was acceptable as it has behind it the shadow of the don. The bluff tough good-hearted guy with a change of attitude, but not a wimp. Roses delivered pugnaciously. The implicit iron hand inside the velvet glove. Non-violence here is a gracious concession, and a bargaining chip, not a surrender to one’s conscience. It was still the don who ruled our hearts.

When Sanju sweeps the box office and ratings on June 29, as it inevitably will, it will be a celebration of this dysfunctionality in the hearts and minds of a populace which adulates the most unlikely role models whether in politics or cinema, which prefers froth over substance, and creates heroes out of men of straw.

Redemption is just a few reels away.

Post your comment
#Rajkumar Hirani, #Sanjay Dutt, #Bollywood, #Sanju
The views and opinions expressed in this article are those of the authors and do not necessarily reflect the official policy or position of DailyO.in or the India Today Group. The writers are solely responsible for any claims arising out of the contents of this article.