Why Sanskrit love poetry is worth immersing yourself in

Meghadūta is the earliest work that has survived to our times, but the idea of a love messenger is quite ancient.

Dūtakāvya, or sandeśakāvya, is a genre of Sanskrit love poetry made famous by the exquisite Meghadūta of Kālidāsa. This outstanding composition was both seminal to the classical genre, and the cause for its eventual neglect. All poems that came after it (to date) are deemed to be either copies or inferior and therefore not worthy of serious attention.

Evidence the fact that most of us probably don’t know the name of any other dūtakāvya. Meghadūta spawned one of the most widespread literary phenomena of premodern Bhārata. Hundreds of dūtakāvyas have been composed in Sanskrit and other sub-continental languages. But most of them gather dust, untranslated.

Meghadūta is the earliest work that has survived to our times, but the idea of a love messenger is quite ancient. In the Mahābhārata, we see Nala sending his proposal of love to Damayantī via a speaking goose with golden plumage (Vanaparvan, Nalopakhyāna).

Even earlier than that, in the Ṛig Veda (V.51.17-19) Śyāvāśva Atreya asks ūrmyā (the night) to carry his hymns to his patron (whose daughter he is in love with). There are proto sandeśa motifs in (Tamil) Caṅkam literature - with messengers ranging from clouds, birds and the north wind.

The theme of dūtakāvya is invariably the separation of lovers - divine, semi-divine or human. The poems are mostly about viraha (separation) and the prevailing aesthetic sentiment is that of vipralambhasṛṅgāra rasa (love in separation).

The bereft, almost deranged lover, implores an unlikely messenger to carry his/her message of love and a promise of reunion to the beloved. A goose, a cloud, a parrot, a cuckoo, a peacock, a starling, a language (Tamil), a wind and in a contemporary composition by Acharya Ramanuja Devanathan (candradūta) - the moon*.

The poems link the powerful emotions of love, separation and the desire for reunion to landscapes familiar to the poet. The messenger sees this landscape from an aerial point of view, en route its destination. The natural world - flora, fauna, rivers, mountains - all seem to echo the lovers’ intense yearning and anticipated reunion. 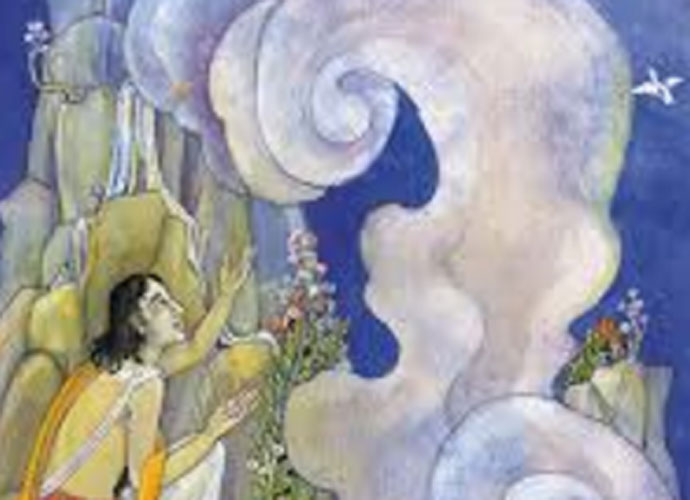 Divided into two parts, the poem is invariably in the elegant, lilting but slow moving mandākrantā meter, and is no longer than 200 verses. The pūrva (earlier) portion of the classical dūtakāvya describes the landscape over which the messenger will pass. The uttara (latter) portion contains the message itself.

Significantly, besides burning love and turbulent emotions, dūtakāvya elaborates landscapes marked by the culture, religion and values of the poet. So, Kālidāsa’s Meghadūta places particular descriptive energy on the towns and sacred places surrounding his home country. Sometimes the slant is political - valorising a patron/king and his kingdom, sometimes a beloved city or geographical region.

At other times it is sāmpradāyika - extolling one particular deity, temple or sacred region. Reflecting the geo-political and religious imaginaire of the composer, dūtakāvyas from different parts of the sub-continent written in different historical periods provide a valuable resource for mapping both sectarian boundaries (or the lack of them) and reconstructing the histories and borders of ancient nation state. Considering this, it is baffling that the genre has not received more attention.

Let us examine a few examples. CM Neelakandan’s commentary on Rāmapāṇivāda’s sārikāsandeśa (parrot messenger) details the socio-cultural history of mid-18th century Kerala. In the poem, a female parrot carries a message from a love-crazed gopī in Vrindavan to Kṛṣṇsa in Ampalapuzha (where there is a renowned Kṛṣṇsa temple).

Some 30 sandeśa poems between the 14th and 17th centuries also from Kerala shed light on customs and practices, having their own specific provenance, patron, god, and their own discreet geopolitical and cultural canvas.

Kālidāsa’s Meghadūta speaks with intense fondness of Ujjaiyinī, the Malvā region. Kālidāsa is known from his writings to be a devout Śaiva. Faithfully, the cloud makes a detour to Avantī and the Śiva Mahākāla temple on its way to Alakā, its destination.

Consider next the haṃsasandeśa of the renowned Vedāntadeśika, 14th century South Indian Śrivaiṣṇava saint-poet, theologian and philosopher. Vedāntadeśika picks a moment when dūta Hanumān has returned from his trip from Laṅkā with tidings of Sītā. Rāma now sends a message of love to her via a goose.

The motifs of tremulous, vulnerable love, the anxiety of separation and the longing for union with the beloved - intrinsic to both dūtakāvya and the Śrivaiṣṇava tradition are reflected delicately and powerfully in this poem. But the poem also self-consciously valorises the excellence of a particular South Indian landscape with its holy rivers, mountains, fields and shrines - that of the Tamil country. Unlike Kālidāsa’s cloud, Vedāntadeśika’s gander is south-bound. He goes across five geopolitical regions that make up the Tamil country before crossing to Laṅkā. First Tirupati, where ViṣṇuVeṅkaṭeśvara’s presence on Mount Añjana is the primary focus. The second unit is Tuṇḍīra and its capital Kāñcī.

The Varadarāja temple on Elephant Hill is described at length. Unit three consists of the Chola country and the Kāverī delta. The river, rich in pearls and areca trees, is prominently featured as superior to the Ganges, while the nearby Lunar pond is said to be superior to Lake Mānasa.

The fourth unit is the Pāṇḍya kingdom and its capital city Madurai. Here the main landmark is the Alagar Malai temple, located on Bull Mountain just outside the city, where Viṣṇu is believed to have brought a southern Gaṅgā down to earth.

The fifth and final unit is the southern coast, where the main points of interest are the Tāmraparṇī and its various attractions (pearls, perfumed winds that blow directly from the aromatic sandalwoods growing on Mount Malaya, and the sage Agastya, who lives nearby) and the coastline with its palmyra and pandanus trees.

Another poem worth mentioning in this context is Haṃsasandeśa by the Kerala-based author Pūrṇasarasvati. This particularly beautiful and unstudied work has Kṛṣṇa in Mathurā receiving a message from a woman follower who is madly in love with him. The sender is in the South and the poem celebrates the main centres of worship in the Tamil country, with Kerala as an important component (whereas Vedāntadeśika dismisses Kerala in his poem). Dūtakāvya, it can thus be seen, is a valuable repository of regional efforts to envision and create local maps - political, cultural, linguistic, religious, and sectarian.

To dismiss dūtakāvya as mere imitation is to do this literary genre a great disservice. Scholars who have studied it closely assign great depth and density to it. While we saw Vedāntadeśika bring a southern Vaiṣṇava landscape to life, the sandeśa poetry of someone like VāmanaBhaṭṭaBāṇa (circa 1400 CE) recalibrates the same landscape by imbuing it with Śaiva sacred nodes.

Using elements such as plot junctures, themes, images, and specific geographic sites, poets in this genre innovate by revisiting the same building blocks. Using silence, omission, reproval or reaffirmation, they assign new “values” to the elements. Studying dūtakāvya can give us great insights into the history, geography, culture and religion of premodern Bhārata.

Bronner, Y: Birds of a Feather: VāmanaBhaṭṭaBāṇa's Haṃsasandeśa and its intertexts

Wojtczak, L: What to take on a wild goose chase. The journeys of two feathered messengers in Sanskrit dūtakāvya, in A World of Nourishment, Reflections on Food in Indian Culture, ed, Pieruccini, C and Rossi, PM, L, Ledizioni, 2016

#Mahabharata, #Sanskrit literature
The views and opinions expressed in this article are those of the authors and do not necessarily reflect the official policy or position of DailyO.in or the India Today Group. The writers are solely responsible for any claims arising out of the contents of this article.