Sara Ali Khan lugs her own luggage! Why this shook the internet

Sara Ali Khan is being praised for something millions of people do every day without any comment. Why do we always fall for the 'gracious celebrity' image?

When Sara Ali Khan landed at Chhattrapati Shivaji International Airport in Mumbai recently, having completed a shooting schedule in Lucknow, she was seen — get this — pushing a trolley!

Now, before you gape at this, let us give you some details.

Sara Ali Khan had three huge suitcases, piled on one of those airport trolleys — and she was pushing it, all by herself!

Paparazzi photographs of this momentous moment are currently breaking the internet.

Fans of Sara are praising her ‘simplicity’ and her ‘humility.’

This act of pushing your own trolley shows, according to fans, how ‘down to earth’ she is.

Comments like “no manager, assistant, spot boy? Very down to earth” to “she doesn’t behave like a Diva at all, from her clothes to pushing her trolley to being sweet to people who are nice to her .. very human” filled the said post, with entertainment portals jumping to ‘higher’ her approval ratings’ for this — pushing her own trolley.

But this isn’t even the first time Sara has been lauded for something thoroughly inconsequential.

When Sara made her screen debut of sorts in Karan Johar’s TV show, Koffee With Karan with her father, Saif Ali Khan, she was lauded for being smart and spunky. As if it is really surprising to see a ‘smart’ woman. Add to that the privileged upbringing that gave her access to some of the top schools and colleges — if that still didn’t make her smart, well, that would be a matter of concern now.

So, she earned fans and admiration based on her television appearance, not her acting chops.

And she’s a Hindi film actor. 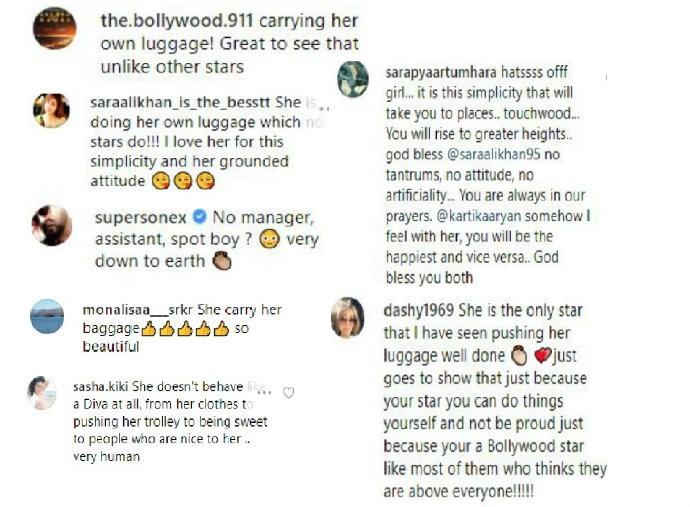 In the airport trolley case, she stood out primarily because other celebrities are not usually seen doing this. Yes, they have an entourage, security personnel flank and escort them to their cars, occasionally warding off paps officiously, with extremely high-paid nannies in town, depending on if their children are stars in no right.

So, when Sara was spotted devoid of all this, she immediately stood out.

And those fans she had earned after her Koffee appearance were ready to now crown her.

Oh, this bubble that we create around 'gracious', 'modest', 'down to earth' celebrity! Do we even realise that it's only a thing of convenience? That it will last just until Sara — once she actually delivers a hit — hires an entourage and one of them covers a camera lens bossily with their palm to avoid her getting clicked?

For an entourage she will get. They always do.

It is what differentiates a commoner and a star — the higher you go up the stardom ladder, the more people you keep adding to your ‘team.’

It’s only a matter of time.

If you’re still wondering why no one ever notices when you push your own trolley, hail your own cab, shop for your own groceries, cook your own food, so on and so forth, well, welcome to the commoners’ club.

Guess what — you and I will never have ours.

#Koffee With Karan, #Saif Ali Khan, #Bollywood star kids, #Sara ali khan
The views and opinions expressed in this article are those of the authors and do not necessarily reflect the official policy or position of DailyO.in or the India Today Group. The writers are solely responsible for any claims arising out of the contents of this article.