In the last two years, Bollywood has said plenty on the nepotism debate. When will it finally act?

Interviewer: Prior to saying that you’d signed Kedarnath, there were so many reports of who was going to launch you. Do you think you had an advantage in finding this script because you’re the daughter of Saif Ali Khan and Amrita Singh?

Sara Ali Khan: Yes, I do. This has become a conversation back home. This word, nepotism, that a lot of people talk about. And I don’t think I can run away from that. I think it would be hypocritical, and even wrong of me to say that it doesn’t exist.

Seen in isolation, this is as perfect a sound bite as a Bollywood blue-blood launched post-2017 could get.

It shows how you’re completely aware of your privilege and won’t even try to deny it. It would stand out among the many star kids who naively claimed that everything they’ve gotten is only a product of their hard work and would instantly set you apart.

These perfect sound bites, unfortunately, are misleading, because they don’t tell you anything that happened before or after. The reason this question was asked of Sara Ali Khan by a BBC journalist in her first ever one-on-one interview was that she said that she wasn’t actually looking for a script, but was “waiting to be found.” She also said that Kedarnath’s writer (Kanika Dhillon) and director (Abhishek Kapoor) actually came to her and narrated the script before her. Can Sara Ali Khan stand out among the many star kids that exist? (Photo: India Today)

Anyone even remotely aware of how Bollywood works would know that being approached by a National and Filmfare Award-winning director and having a script narrated to you is a privilege that only the biggest stars and film producers get. Here was a 23-year-old woman who had not done any prior work, speaking matter-of-factly about this luxury as if it were a daily occurrence.

Following her apparently humble remark acknowledging her privilege, Khan, without any prompting, said the tonality of the nepotism debate had become too harsh.

“While star kids have easier access into this line maybe, if you’re not good, you’ll be asked to leave,” were her exact words.

The interviewer was quick to point out that if you’re not good, you wouldn’t get a second chance either, to which Khan agreed. It was then pointed out to her that she’d already gotten a second chance, as Simmba was to release only three weeks after Kedarnath.

Immediately, Khan changed tack and went back to being the starry-eyed, relatable kid who had always dreamed of this, and was herself surprised at how well her career had started. And she seemed to turn her immense privilege into a burden by claiming that getting two films without having done any kind of work actually put pressure on her. It's not about only her. The emergence of the actress has reignited the nepotism debate. (Photo: India Today)

The day after this interview, Khan appeared on Koffee with Karan, where she checked all the right boxes. She spoke candidly of her parents' divorce, her father’s second marriage and having PCOS. This public appearance, along with the BBC interview, was the perfect advertisement for a new star kid. Candour, check. Cool, check. Body positivity, check. Privilege acknowledgment, check.

No one asked what someone who’s never even appeared in a film is doing on a national talk show on which major film stars appear. No one thought that Koffee with Karan is effectively a promotional platform for Bollywood insiders who want to appear fun and relatable, to form a connection with their star-worshipping audiences. And no one wondered what talent or hard work had Sara Ali Khan shown to deserve two lead roles in two big movies.

One would think that a new star kid being sold to us on the same couch where Kangana Ranaut started a much-needed conversation about nepotism only 18 months previously was the con of the century. But in Bollywood, it is an everyday exercise.

This is not just about Sara though. Any star kid who is refined, educated, conventionally attractive, from an elite film family, and bothers to share a few details about their personal lives is instantly accepted by even the most educated, most woke lot. Film journalists rave about them and Twitterati stan them at every unavailable opportunity.

In her own words, Sara Ali Khan had a National Award-winning director pitch a script to her. All she had to do to land a role in Simmba was text Rohit Shetty. She got lead roles in two films without working in any related field. While promoting Kedarnath on the sets of Indian Idol, she actually said that her co-star, Sushant Singh Rajput “helped her improve her Hindi,” without thinking apparently that fluency in the language is a basic requirement for acting.

Her first film was a flop, and even before the second one came out, there were reports that she had already bagged two more projects: Love Aaj Kal 2 and the Coolie No. 1 remake.

Even by star kid standards, Khan’s privilege boggles the mind. Unlike some of her ilk, Khan did not even play assistant director to a successful director to learn the craft. But like many before her, Sara Ali Khan is being marketed so aggressively, getting so many opportunities, that the Darwinian laws that apply in this ruthlessly competitive world are turned on their heads and failing has actually become more difficult for her than succeeding.

If Kedarnath flops, there’s Simmba. If it’s pointed out that Simmba’s plot wouldn’t have changed one iota if her character didn’t exist, then there will exist Coolie No. 1, Love Aaj Kal 2, Ranbhoomi or any one of the umpteen projects she will eventually get.

In the 2006 romantic comedy, The Holiday, Miles (Jack Black) asks “Why am I attracted to a person I know isn’t good?” to which Iris (Kate Winslet) replies “Because you’re hoping you’re wrong and every time she does something that tells you she’s no good, you ignore it, and every time she comes through and surprises you she wins you over.”

Nothing explains the toxic relationship between the Indian public and star kids better than this.

Every time a star kid says something glaringly privileged, every time they try to make their privilege sound like a hindrance, every time they use the “Nepotism only gets us our first chance” defence, when all evidence points to the contrary, we ignore it. 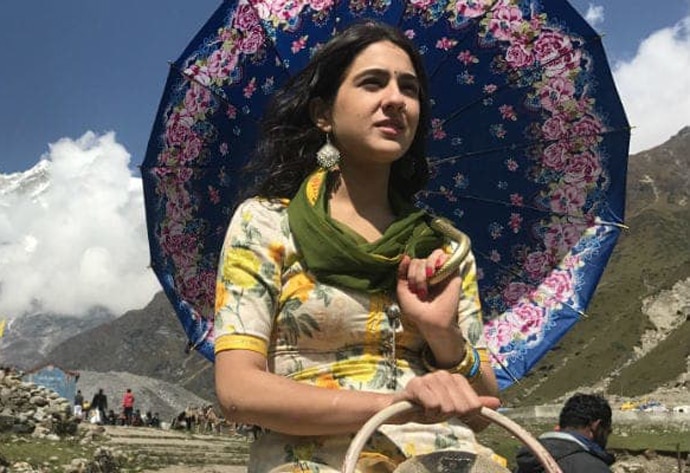 An unending circle? In the last two years, Bollywood has said plenty on nepotism. When will it finally act? (Screengrab: Kedarnath)

But every time they show even an iota of acknowledgment of their privilege, the smallest glimpse of sensitivity, or relatability, or the faintest whiff of talent, we’re willing to write odes praising them. Every film that fails will be swept under the rug and every film that succeeds will be proof of the public accepting him/her.

In the last two years, Bollywood has said plenty in defence of its nepotism. The most common argument is talking about nepotism in other fields as well. What Bollywood refuses to understand is that it has the unfortunate distinction of being the only field other than politics which apparently cares nothing for market forces or the will of the public.

If Bollywood wants Abhishek Bachchan to be an actor, he will get work, despite almost two decades of failure.

If Bollywood wants Ranbir Kapoor to be a star, he will be a star, despite having one hit in five years.

And now, Bollywood wants Sara Ali Khan to be a star and has thrown its entire weight behind her. #MakeSaraAliKhanAStar is the industry’s new campaign.

Who are we to stop it?

#Simmba, #Kedarnath, #Bollywood, #Nepotism
The views and opinions expressed in this article are those of the authors and do not necessarily reflect the official policy or position of DailyO.in or the India Today Group. The writers are solely responsible for any claims arising out of the contents of this article.