Why there are two Shah Rukh Khans today

Will Fan redeem the Baadshah of Bollywood?

Shah Rukh Khan's Fan releases on Friday (April 15), 23 years after a stuttering schemer with a vendetta charmed a businessman's elder daughter, promised her marriage, and then threw her off the rooftop of a tall building. The funny-nosed nobody with "hair like a bear" then offered a sympathetic shoulder to her younger sister, while plotting to destroy the rest of the family.

It was a role so dark for mainstream Bollywood that the single-theatre audience gasped and held on to the edge of their seats, too shocked to clap or whistle, too hooked to order popcorn. The anti-hero was killed in the end, and the industry's biggest star of that decade and the next was born.

Baazigar, a film rejected by both Anil Kapoor and Salman Khan, and then Darr and Anjaam, did to Shah Rukh's career what nitrous oxide does to fast cars - gave it a head start that left his industry seniors and surname-sakes, Aamir and Salman, very far behind.

Imagine what Sunny Deol must have gone through before and after the release of Darr. In his mind, it would have been the perfect film; he got to play the muscled marine commando, romancing the pretty lady, saving her from her obsessive stalker time and again, and eventually bumping off the bad guy. Only after the film released and he saw the audience reaction did poor Sunny must realise he has been short-changed and how!

The vengeance-is-mine Ajay Sharma/Vicky Malhotra, the singing stalker Rahul Mehra, and the madman-millionaire Vijay Agnihotri were not characters his competitors in the industry would dare to pick. But he did, the gamble paid off, and success became Shah Rukh Khan.

Also read - Why did Ranveer Singh faint after dancing to SRK's 'Fan'?

The years that followed were good to Shah Rukh. The quintessential Bollywood outsider became the Baadshah, but something else also changed. The anti-hero became the lover boy, arms outstretched, parampara in place. Rahul (naam toh suna hoga?) became the go-to guy to learn romance from.

Yes, he did attempt Dil Se, Swades, Paheli and Chak De! India, films that were more, to use my industry's parlance, The Indian Express than The Times of India, and while the critics nodded in favour, the masses weren't half impressed. 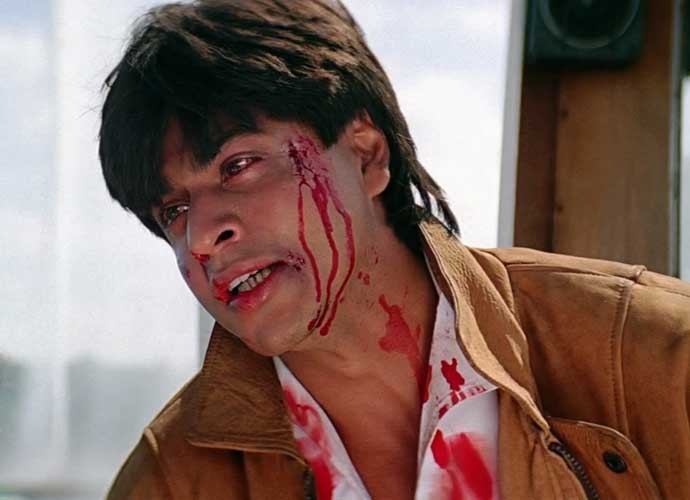 Shah Rukh Khan in a still from Darr.

So he kept returning to the lover boy and the audience kept loving him back. The formula worked so well that Dilwale Dulhania Le Jayenge had a grand silver jubilee celebration last year. The risk-taker, the gambler, the outsider wanting to break in became the ultimate insider.

Shah Rukh dismisses the theory that he has stopped taking risks, though. Before the release of Dilwale, I had asked him if he plays safe now. "You think doing a Rs 300-crore movie is playing safe? It is far easier to do a critically-acclaimed movie," he said.

Also read - From SRK to Ranbir Kapoor: What stars have realised about the Bollywood fan

But fact remains that when he signed up for films like Ra.One, Chennai Express or Happy New Year, Shah Rukh was not accounting for good taste, only good business.

The Baadshah of Branding that he is, he offset it by playing it cool off screen, by smoking in public, by not holding back his anger at Wankhede Stadium, and pissing off Lata Mangeshkar by addressing her as Miss Mangeshkar and not Lataji or whatever.

If you had been missing the maverick on screen, well, here was Shah Rukh in real life breaking bad from time to time: distinctly different from the sanctimonious Aamir and the simple-hearted Salman.

The year 2016 changed all that. For the first time perhaps, his formula failed. Dilwale didn't get the response he thought it would. The audience has had enough!

What was worse was that Shah Rukh had to turn politically correct off screen as well. The First Family of the Congress that he is so close to is not in power, and the new dispensation, well, is not very favourable towards the man who made Inshallah coolspeak. Gau bhakts and Gauri Khan's hubby make strange bedfellows.

Also read - Why SRK's Fan and Raees will suffer like Dilwale

When he reacted to the intolerance debate, the outrage which greeted him online and off it, made the Baadshah bend. Shah Rukh can no longer speak his mind the way he used to.

There is no marketing overdrive before the release of Fan, too few interviews and fewer quotable quotes.

So what gives? Shah Rukh may be forced to be cautious in public, but he can always bounce back in his movies. In Fan, the fan, dismissed by his hero, turns against him. The idol becomes the target. The nobody becomes the nihilist.

Describing the character of the fan, Shah Rukh said: "It's about innocence. It's about when you're young, you have stars in your eyes, and you feel that everything or the person that you love, will love you that much in return. But when sometimes things don't happen the way you think, you get a bit disturbed."

#Intolerance, #Dilwale, #Shah Rukh Khan, #Fan
The views and opinions expressed in this article are those of the authors and do not necessarily reflect the official policy or position of DailyO.in or the India Today Group. The writers are solely responsible for any claims arising out of the contents of this article.