An old SRK, and Alia Bhatt: Why Bollywood male leads must retire

Actresses face the question of age suitability, the moment they get on the wrong side of 40.

Gauri Shinde who gave us the wonderful English Vinglish, about an Indian woman trying to learn English and much else about herself in New York City, is back with her second venture. The film stars Shah Rukh Khan who is paired with - wait for it - Alia Bhatt.

I could bring up the ages of the two stars to indicate how silly this combination is but I will spare SRK the embarrassment. Suffice to say that Deepika Padukone, who is certainly older than Alia, once said in an interview that she had fallen in love with SRK as a teen. What is it about our film industry that it refuses to retire senior actors even as elderly actresses continue to fight for visibility? Madhuri Dixit, who is a consummate actress, has struggled in recent years to make a comeback after she left Bollywood following her marriage. None of her vehicles, including the delightful Dedh Ishqiya, set the box office ringing. SRK, Salman Khan, Akshay Kumar and a slew of other male stars, on the other hand, continue to bag mainstream roles, and are perhaps doing even better today than during their heydays. SRK has a number of films lined up, from Dilwale with Kajol to Raees and Fan. The promos for these films indicate meaty parts for the actor, but when an Alia is paired opposite him, one must stop and ponder if the joke has gone too far.

Shinde’s first film, in fact, is instructive. Sridevi returned to the limelight in that film as a housewife who faces rejection at home from her husband and daughter, and tries to discover herself in Manhattan. It was a wonderfully sketched role, one that did not have her playing a sexy siren, yet which was fully realised, and, one can’t help saying it - “suitable for her age”.

Actresses have this parameter – age suitability – to consider, the moment they get on the wrong side of 40. They must now take roles where they do not come across as seductresses. In that respect, Sridevi’s role in English Vinglish was actually a game changer, because in spite of her playing a mother, the storyline included an (abortive and one-sided) romance with a solicitous Frenchman. 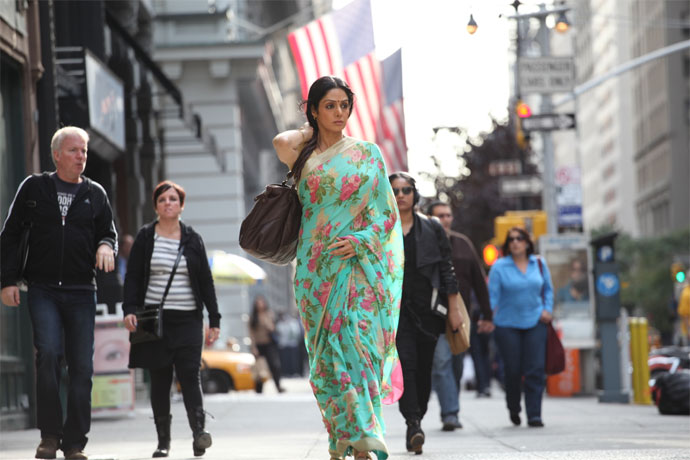 The only time actresses of a certain age are offered roles befitting their stature is when they tap the arthouse circuit. Shabana Azmi, for example, has been doing some fantastic roles over the years, including in such purportedly commercial films as Matru ki Bijli Ka Mandola. Hema Malini is another actor who has taken up roles that have allowed her more than the briefest screen time, such as in Baghban.

But the truth is, there is a dearth of roles for ageing actresses, and not just in India. One of the funniest sketches on Inside Amy Schumer showcases a bunch of actresses including Patricia Arquette and Tina Fey celebrating the “last f**kable day” of Julia Louis-Dreyfus. The sketch hilariously proceeds to inform the viewer that every actress reaches a point when she is no longer considered "f**kable" on screen, and the group has assembled to mark that occasion for Louis-Dreyfus.

The fulcrum on which the sketch rests pertains to how those standards don’t apply to men. At one point, Arquette, who won an Oscar for her performance in Boyhood tells the group: “I didn’t get a part because I was told I am too old to play Larry King’s wife.” King is 82; Arquette 47. You know it's a joke because Arquette would never work with King - they come from different schools - but it still lands brilliantly.

Meryl Streep is perhaps the only Hollywood actor who has defied this trend. From playing the Mrs Dalloway-inspired Clarissa in The Hours to the frosty boss in The Devil Wears Prada to this year’s Ricki and the Flash in which she plays an ageing rock star, Streep has consistently pushed the glass ceiling of roles for women.

Sadly, the same scenario does not obtain in India. Part of this, of course, has to do with the fewer narrative possibilities for women, which is a reflection of the society we live in. Clarissa Vaughan in The Hours is a lesbian who shares her apartment with another woman but longs for the brief love that she shared in years ago with Richard, who is gay and dying of AIDS. A society has to be at a certain plane to permit such a script.

Be that as it may, the preponderance of roles for men, and not just the villain-beating Salman Khan blockbusters, indicates that there is hope still. SRK himself will play a druglord in Raees and a man in the thrall of a Bollywood star in Fan. Those roles call for real acting, not just posturing, and if such roles are being written for men, perhaps women can expect a future bonanza too.

Then again, SRK who turns 50 this year will benefit from the slick gels and the skin tucks that will make him look a decade younger so that he looks a suitable suitor to Alia. No such luck for our female performers.

#Alia Bhatt, #Akshay kumar, #Salman Khan, #Shah Rukh Khan
The views and opinions expressed in this article are those of the authors and do not necessarily reflect the official policy or position of DailyO.in or the India Today Group. The writers are solely responsible for any claims arising out of the contents of this article.