[Book Extract] This was the filmmaker's only feature film in Hindi/Urdu and also his most expensive.

From a long career of low-budget art films, Satyajit Ray had learnt to make do with very few takes. Generally, every scene was well thought-out and ready to shoot with almost no rehearsal, so that the spontaneity would lend more realism. Shatranj Ke Khilari's cast of professional actors required very few takes anyway.

Manik-da was always flexible about letting actors add their touch to a scene. While researching his part as General Outram, Richard Attenborough found that the man smoked cheroots and wore a pince-nez. He thus not only began practicing a Scottish accent but also brought the props with him.

On arriving at Calcutta airport, he shared these details with Ray at the baggage claim, but quickly added, “Satyajit, you are the director, and I will do whatever you want.” Ray’s immediate response was that if that were the research he would gladly go along with it. Richard was incredibly pleased with being allowed to bring a depth to his role that he had discovered himself. And when Saeed Jaffrey wanted to deliver certain dialogues in a particular way, knowing that Saeed knew Urdu better than himself, Ray let him.

Usually, other than the night shoots, Ray liked to work from 9am to 6pm, with a one-hour lunch break. Since film shooting involves hard physical labour, especially for the crew, the meal service was substantial. It would usually include heaps of rice, chapattis, at least two vegetables, one non-vegetarian dish, salad and dessert along with tea and coffee. But having already had a large breakfast at home, Ray preferred light lunch, usually consisting of a sandwich, sweetmeats, tea and his beloved cigarettes. I noticed that he never ate fruit. He didn’t like fruit at all. And he never touched any kind of alcohol either. 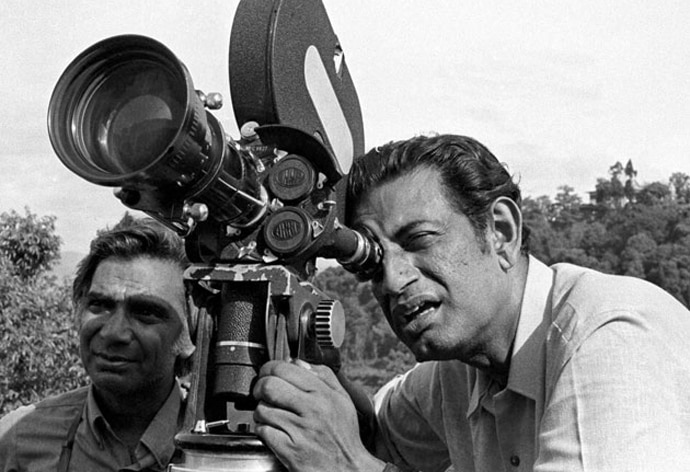 Ray usually ate on one side of the set with his son and wife, and any other relative or special visitor that might be visiting on the day. His wife and his son, Sandip, who was his assistant director, accompanied him on all outdoor shoots. He was a complete family man. Considering his prolific and compulsive work habits, that was probably the only way they could get to see enough of him.

When his film unit and the actors were in a mischievous mood, they would affectionately refer to him as "God", since he was a "God of cinema". Of course, they would never dare say this in front of him, only among themselves, but loud enough to be heard by him. One of his assistants had already nicknamed him "lambu" (tall man). Ray was almost certainly aware of these comments but never let on that he had heard them.

While shooting a film, he would never go out in the evenings, unless it was related to the next day’s shoot. He would instead use the time to visualise the following day’s scenes or to write dialogues or lyrics (to the music he had already composed). Social events made him nervous. Although aware of his stature, he remained a shy and private man. There was a saying: “If you want to torture Ray, take him to a party.”

There was no wrap-up party at the end of production.

Also read: How Pakistan's politicians are dragging the country to hell

#Cinema, #Bollywood, #Satyajit Ray, #Shatranj Ke Khilari
The views and opinions expressed in this article are those of the authors and do not necessarily reflect the official policy or position of DailyO.in or the India Today Group. The writers are solely responsible for any claims arising out of the contents of this article.