A Western depiction of the Sikh world

80 pieces of artwork by 19th and early 20th century painters from across the globe were recently displayed at the exhibition titled Sikhs — An Occidental Romance.

“Akalees or Immortals… wild in appearance and turbulent characters… remarkable for acts of desperate courage… the profusion and variety of their arms make them very picturesque objects,” is how author-artist Emily Eden, who visited India in the mid-1830s along with her brother Lord Auckland, the governor general, described the Sikhs under Maharaja Ranjit Singh. Eden painted the Sikhs and also wrote about them. Her observations, in both paintings and writings, offer valuable details about 19th century Punjab, particularly the royal court. For instance, she was curious about the way Ranjit Singh was simply dressed while his courtiers wore expensive clothes.

August Schoefft, an Astro-Hungarian artist, too, came to India during Ranjit Singh’s reign. He painted the Sikh ruler in the backdrop of the Golden temple, as well as Sher Singh, who became the maharaja two years after Ranjit Singh’s death. In both the paintings the king is shown as wearing the famous Kohinoor diamond. Alfred de Dreux was best known for his scenes with horses. In 1838, he was asked by Ranjit Singh’s Italian general Ventura to paint the king on a horse. The painting was to be later gifted to Louis Philippe of France as a mark of friendship between the two rulers.

80 such artworks by 19th and early 20th painters from England, France, Germany, Hungary, Austria, Russia, Japan, America and other countries were recently displayed at Delhi’s All India Fine Arts and Crafts Society (AIFACS). Titled Sikhs — An Occidental Romance, the show was put together by Hubris Foundation.

On display were masterpieces by William Carpenter, Rudolf Swoboda, Edwin Lord Weeks, Charles William Bartlett and others — all of whom seem to be captivated by the Sikh community, its tales of courage and the wealth of its nobility. Queen Victoria’s journal, dated July 10, 1854, for instance, records that German artist Franz Winterhalter, the principal portraiture at her court, was “in ecstasies at the beauty and nobility of bearing of the young Maharaja” Duleep Singh, who, in turn, was “very amiable and patient… giving a sitting of more than two hours”. Winterhalter’s portrait of “very amiable and patient" Duleep Singh is one of his most notable works. (Photograph of the original painting on display in Delhi)

Winterhalter’s portrait of Duleep Singh is certainly one of his most notable works. Charles Hardinge also painted Duleep Singh, particularly his return to the Lahore Fort in 1846; the work shows Lahore as a bustling city.

Many of these artists, like Eden, wrote books on their travels across India, particularly Punjab. American artist Edwin Lord Weeks’s 1895 illustrated book, From the Black Sea through Persia and India, is one such work.

It wasn’t only royalty — the artworks in the Hubris show also had common people, soldiers, peasants and scenes from the Anglo-Sikh war. Rudolf Swoboda’s A Peek at The Train, perhaps the artist’s most famous work on India that was displayed at the Royal Academy in 1892, shows a family waiting at a railway crossing on the Multan-Lahore-Amritsar line that opened in 1861. Swoboda’s two portraits of Abdul Karim, Victoria’s favourite Indian servant, was much appreciated and the queen commissioned him to paint her Indian subjects. 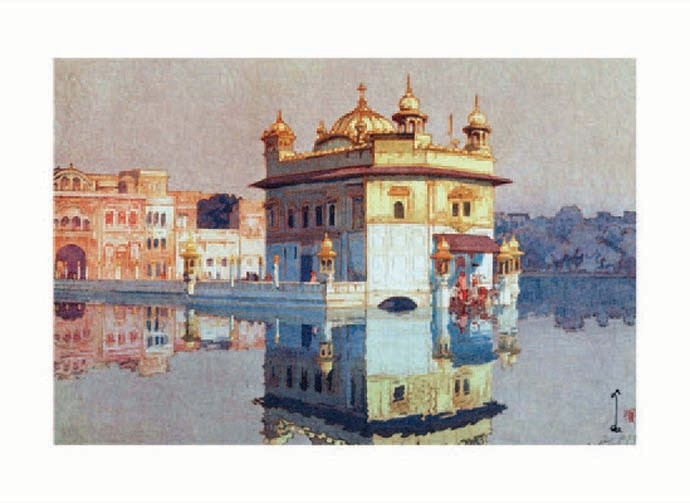 The Golden Temple, its reflection in the lake around it with a play of light and shade, stands out in the work of Hiroshi Yoshida. (Photograph of the original painting on display in Delhi)

If Swoboda painted ordinary men and women, William Carpenter, a watercolour artist who travelled to India in the 1850s, painted the Indian landscape. Though his most famous painting in India is a portrait of Fakhr-ud Din Mirza — the eldest son of last Mughal ruler Bahadur Shah, in 1856, barely five months before the prince died — the one community that seems to have captured his imagination was the Sikhs. Carpenter’s paintings at the show depicted Tej Singh and Gulab Singh, both of whom had abandoned the Sikh army to become British allies in the Anglo-Sikh war of 1845-46. He also painted the Golden Temple complex.

The Golden Temple, its reflection in the lake around it with a play of light and shade, stands out in the work of Hiroshi Yoshida, a 20th-century Japanese painter and woodblock printmaker. Yoshida was the rare Japanese travelling across the Indian subcontinent that was already teeming with Western artists.

The show transported one to the world of the brave Sikhs of the 19th century. “The original artworks are all scattered across the world. This show is made up of replicas. The process of creating a perfect replica is a complex one – the ink is from Japan, the printing is done in Germany and the best replicas can be done in only three places in the world,” said Gautam Srivastava of Hubris Foundation. The exhibition was the coming together of modern technology and past glory — romantic indeed!

After Delhi, the show will move to Chandigarh’s Punjab Art Council Gallery in the third week of May.

Also read: Why Maski, a sleepy village in north Karnataka, has much to offer archaeologically

#Maharaja ranjeet singh, #Maharaja duleep singh, #Exhibition, #Paintings
The views and opinions expressed in this article are those of the authors and do not necessarily reflect the official policy or position of DailyO.in or the India Today Group. The writers are solely responsible for any claims arising out of the contents of this article.