Every Muslim man, ever written into a Hindi movie, has inescapable markers of his religion. Karan Johar's 'Kalank' plays up this stereotype hugely too. Is this depiction drawn from laziness? Lack of awareness? Or something else?

...said every stylist ever hired on a film set to dress a Muslim man.

In over 100 years of Indian cinema, technologically, we’ve evolved from Raja Harishchandra (1913) to Baahubali (2015) — but a Musalman’s wardrobe hasn’t changed.

A look around the newsroom I am sitting in right now — with a fair mix of people from all communities — tells me that something is off. Surely, the man sitting near me doesn’t have kohl-lined eyes. But he is a Muslim. A friend who had invited me over for an Eid dinner didn’t have a taveez around his neck. My neighbour doesn’t go to work dressed in a flamboyant Pathan suit.

Yet, Bollywood insists these three — there are more, easily overlooked by the untrained eye — are the markers of 'Muslim-ness'.

And thanks to Karan Johar’s Kalank, the weirdness of this stereotype has become even more apparent.

Varun Dhawan’s character is Zafar — a Muslim man — introduced to us through an individual character poster released some weeks ago. The close-up makes it impossible for anyone to miss the kohl, the taveez and the salwar too.

Let’s keep looking, shall we?

In February, Zoya Akhtar’s Gully Boy took Bollywood by storm. Most loved it, like yours truly, and a few didn’t. While depicting Murad’s religion in the film — which, some might argue, was easily dispensable — was, in my opinion, a very conscious and deliberate choice on Zoya’s part; she added three namaz scenes. However, did Murad really need to wear soorma? Perhaps not. Yet, he did. 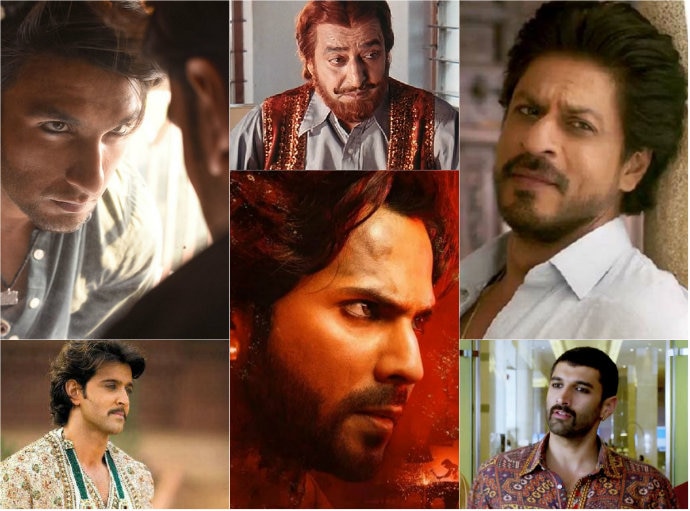 Spot the difference. Hint: there are none. (Source: YouTube screengrabs. Artwork: DailyO)

The year 2018 began with a bang called Padmaavat — and the menacing Alauddin Khilji, essayed by Ranveer Singh. A 13th-century barbaric ruler — who also had kohl-lined eyes.

Has nothing changed in all these centuries?

Funnily, however, even the top three Khans who dominate Bollywood — Shah Rukh Khan, Salman Khan and Aamir Khan — and add Saif Ali Khan to that, too, have never been spotted in kohl-lined eyes.

So, where are the filmmakers getting this idea from?

Why always so Kajrare naina, guys?