Maybe time travel, as envisaged by HG Wells' 1895 novel The Time Machine, is no longer a distant reality.

Sophia, a humanoid robot developed by a Hong Kong-based company, has just been given legs. The robot has been creating ripples all around the world ever since its activation in 2015. Recently, at IIT Bombay’s TechFest, students and technology enthusiasts from all across India got an opportunity to meet this modern marvel of artificial intelligence (AI).

Modelled on the legendary Hollywood actress Audrey Hepburn, Sophia is the world’s first robot to be granted the citizenship of a country. That’s right! In October 2017, the robot was granted citizenship by Saudi Arabia. In November 2017, Sophia was named the United Nations Development Programme’s Innovation Champion, in the process becoming the first non-human to be given a UN title.

What separates Sophia from other robots is its ability to imitate human gestures and facial expressions. Also, it is capable of conversing on a set of pre-defined topics. And now that it can also walk, thanks to its brand new mechanical legs, can we call it a forerunner of the future?

Well, Sophia is clearly inspired by the sophisticated specimens of AI we get to watch in the movies or read about in the books but it can nowhere match their level of intelligence. While it does have remarkable capabilities, it doesn’t yet have consciousness and can’t talk about anything other than what it is programmed to.

But, Sophia is certainly a reminder of how fiction shows science the way forward. It is also an indicator of where the human race is headed in the near future. 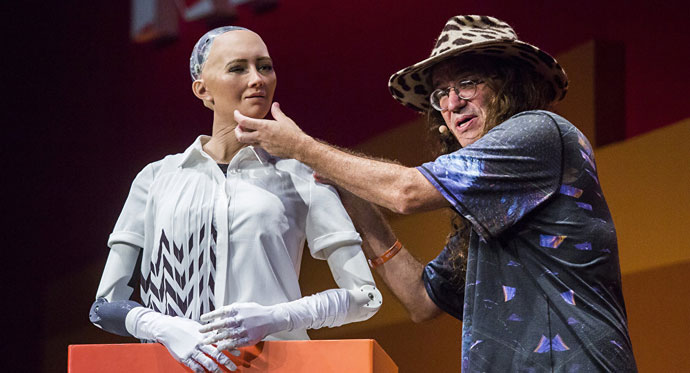 What separates Sophia from other robots is its ability to imitate human gestures and facial expressions. Photo: Reuters

Fiction and science share a lot more in common than what is generally perceived. If we closely studied the scientific inventions of the last 100 years that have revolutionised the world, we would observe that many of them share some connection with fiction. Perhaps, the best example is that of the mobile phone. When Martin Cooper and his team at Motorola created the world’s first portable cellphone in 1973, he attributed the idea to the communicator device he saw in the television show Star Trek. The Star Trek influence doesn’t end there, for the Apple scientist who developed QuickTime is said to have drawn inspiration from an episode of Star Trek: The Next Generation, which showed a character listening to multiple tracks of music on his computer.

Interestingly, the Black Mirror Season 4 episode titled USS Callister, which also draws its inspiration from the Star Trek series, takes the idea of simulation and gaming to a creepy new level, going one step further than the likes of The Matrix and eXistenZ in the speculative world of futuristic science and technology.

Today, artificial satellites have transformed the world of communication but not many people know that about 12 years before the USSR launched the world’s first artificial Earth satellite Sputnik 1 into the outer space, the futurist sci-fi author Arthur C Clarke, best known for his collaboration with US filmmaker Stanley Kubrick on 2001: A Space Odyssey, had described the concept of geostationary satellites in a 1945 article written for the Wireless World magazine.

If we were to go further back in time, we would learn how Simon Lake, regarded as the father of the modern submarine, was inspired by the concept of undersea travel in Jules Verne’s 1870 novel Twenty Thousand Leagues Under the Sea. Speaking of Verne, his 1886 novel Clipper of the Clouds inspired the Russian aviation pioneer Igor Sikorsky to design the prototype of the helicopter.

In the year 2015, Google announced test trials on a prototype of its driverless car. While these cars aren’t fully operable yet, we have already seen them in films like Total Recall, Demolition Man, and I, Robot — based on a fix-up of short stories by Isaac Asimov, published between 1940 and 1950.

In Steven Spielberg’s 2002 film Minority Report, based on a 1956 short story by Phillip K Dick, we were introduced to the multitouch-sensitive computer interfaces and it wasn’t long before motion-touch gaming systems became a reality.

In February 2018, Netflix is set to launch a sci-fi series titled Altered Carbon set in a futuristic world wherein human personalities can be stored digitally, thereby allowing them to be downloaded into new bodies. The series is based on a 2002 novel of the same name by Richard K Morgan.

The 2014 film Transcendence deals with the idea of transferring human consciousness to a computer system. Tarsem Singh’s 2015 film Self/less tells the story of a dying business magnate who transfers his consciousness into a healthy young body. As wishful as these ideas may sound, a startup called Humai is already trying to leverage upon the technological advances made in the fields of artificial intelligence and nanotechnology to transfer human consciousness to a robot’s body.

Whenever one talks of artificial intelligence, it is impossible not to be reminded of the British scientist Alan Turing who, in 1950, devised a test that has since then served as the benchmark for judging a machine’s AI capabilities. The Turing test basically involves a machine and a human having a natural conversation with the machine programmed to give human-like responses.

The evaluator who listens to the conversation must be able to consistently distinguish which is human. If the evaluator fails to do so, the machine is said to have passed the test. Of course, if we were just listening to an advanced robot like Sophia then it would easily pass the Turing test, but when we look at the modern-day AI requirements that go much beyond machine subservience, even looking at the possibilities of companionship between human and machine, we realise that that the pretence of the real has to be more real than the real itself.

Well, at least that’s what films like Her and Blade Runner 2049 have hinted at. Which brings us to the 2014 Oscar-winning film Ex Machina wherein a scientist, who has built a humanoid robot capable of artificial intelligence, tells a programmer assigned with the task of judging the robot’s AI capabilities, “The real test is to show you that she's a robot and then see if you still feel she has consciousness.”

Perhaps, we need to devise an advanced Turing test in order to meet the new age requirements for AI.

One of the greatest accomplishments of science has undeniably been space travel. Although, over the years, we have had many films and television series that have tried to explore the different possibilities that space travel opens up for mankind, it was the French illusionist and filmmaker Georges Méliès’ 1902 silent film A Trip to the Moon that marked cinema’s first foray into celestial infinity.

About six decades later, in 1961, the Soviet cosmonaut Yuri Gagarin became the first man to fly into outer space. Less than a decade later, in 1969, American astronaut Neil Armstrong became the first person to land on the moon. Some other fields where fiction is showing science the way forward include medicine, surveillance, architecture, biotechnology, travel and transportation, VR, genetics, food preservation, prosthetics, cryogenics, and plastic surgery, among others.

Today, the attention to scientific detail in works of fiction is staggering to say the least. Films like The Martian and Interstellar are great examples of the scientific accuracy that modern-day fiction promises.

In 2018, while looking at a robot like Sophia, we may partake in the pleasure of celebrating our achievements insofar as our neverending quest for technological advancement is concerned. And as we continue this pursuit, we can rest assured that fiction will continue to provide the fuel needed for scientific innovation.

Maybe time travel, as envisaged by HG Wells' 1895 novel The Time Machine, is no longer a distant reality.

Also read - Aadhaar breach: How we compromise our privacy on tech

#Sci-Fi, #Artificial Intelligence, #Robots, #Sophia
The views and opinions expressed in this article are those of the authors and do not necessarily reflect the official policy or position of DailyO.in or the India Today Group. The writers are solely responsible for any claims arising out of the contents of this article.