It's a huge fall from grace for the award-winning artist.

Plagiarism is not at all a new concept in India. For several years, our film industry and a lot of its music has been thriving, thanks to blatant plagiarism from cinema and music created by others across the world. While it is absolutely wrong even when it is done by untalented directors and musicians from Bollywood, plagiarism takes a sad turn when a globally recognised, award-winning artist does it.

Souvid Datta, a London-based photojournalist who was born in Mumbai, who has been the recipient of several prestigious international awards (including PDN 30 in 2017, the Pulitzer Centre Grant in 2016, the Getty Grant for Editorial Photography in 2015, PDN Annual in 2015, and Magnum Photos 30 Under 30 Award in 2015), found himself in a couple of fixes this week.

Magnum Photos and LensCulture, who are running a photo competition, used a photo of a trafficked minor sex-worker, one who is possibly the victim of child trafficking, and definitely the victim of statutory rape, to promote the said contest.

According to PetaPixel, the photo comes along with a story on Datta’s website (which has now been taken down).

Aged 12, her family arranged her marriage with an abusive 23-year-old man. She went on to have her first child aged 12. The following year, she fled following her mother’s death taking refuge with her elder sister, then 19. Within two months, her brother-in-law attempted to force himself upon her, yet her sister did nothing, instead demanding she leave their house.

It was on a train to Dhaka, in search of escape and work, that Beauty and her one-year-old son eventually met their trafficker. ‘A vast, wiry-haired…wild-eyed woman’ promised her a menial job with substantial remuneration; minutes later Beauty’s water bottle had been spiked with a sedative. When she awoke she found herself in a half-way house in Nonchapota, on the Bangladesh-India border, awaiting her transfer and sale to the brothels of Sonagachi.

This distasteful use of a sensitive image to run a petty contest opened more unforeseeable problems for Datta.

According to another PetaPixel report, Shreya Bhat, a social worker who resides in Bangalore, who works with sex workers, found some serious plagiarism in Datta’s work.

In his project titled “In the Shadows of Kolkata”, Datta tries to cover the life at the two slums: the Panditya/Gorcha Bastis and Sonagachi. The former is the largest slum of the city and the latter is popularly believed to be South Asia’s largest red-light district. Incidentally, Sonagachi houses approximately 12,000 underage sex-workers.

While Datta’s photo-essay has received widespread acclaim, what is disturbing, is the fact that one of his more famous photos in the series, has been plagiarised and how. 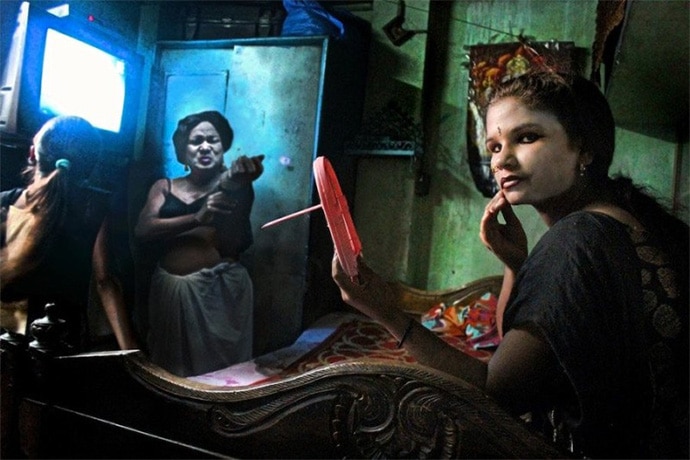 The photo, that has since been removed from his article on The Scribbler, bore the caption:

Radhika, 17, in the room of a veteran sex worker, Asma, in Sonagachi (featured dressing in background). The two have grown close over Radhika’s period here; she respects and learns from Asma’s experience and matter of fact, survival attitude, while Asma feels a fondness for Radhika’s unfettered ‘kindness, curiosity’ and innocence. Strong bonds can often form within brothels as girls learn to support each other and find self-empowerment through group assertion and collective experience.

The woman Datta refers to as Asma, is in fact, not a part of the photo at all. The character called Asma actually belongs to a rather famous photo-series by Mary Ellen Mark, an American photojournalist who spent considerable time in Mumbai, capturing the life at the brothels of Falkland Road in the late 70’s. Mark’s grisly photographs of the dark dingy brothels of Mumbai are iconic. Thus stealing a photo from her corpus is rather difficult.

What Datta did, as is evident, was cut out one of the subjects from one a photograph, flipped it horizontally and placed it in his photo. The original photograph is titled “Transvestites getting dressed in a courtyard” and dates back to 1978. 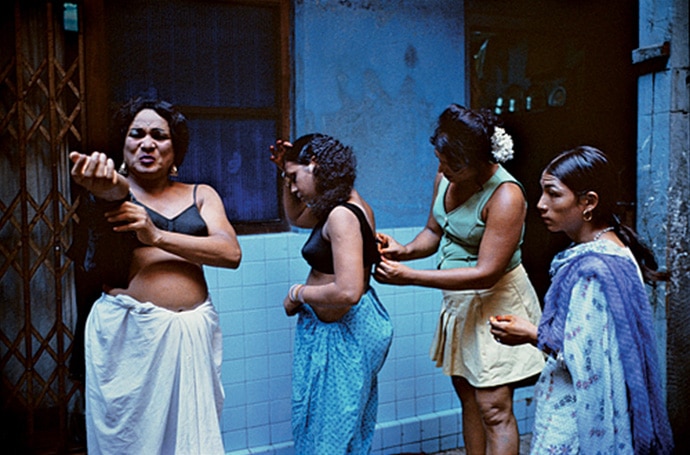 “Transvestites getting dressed in a courtyard”. 1978. [Photo: Mary Ellen Mark] 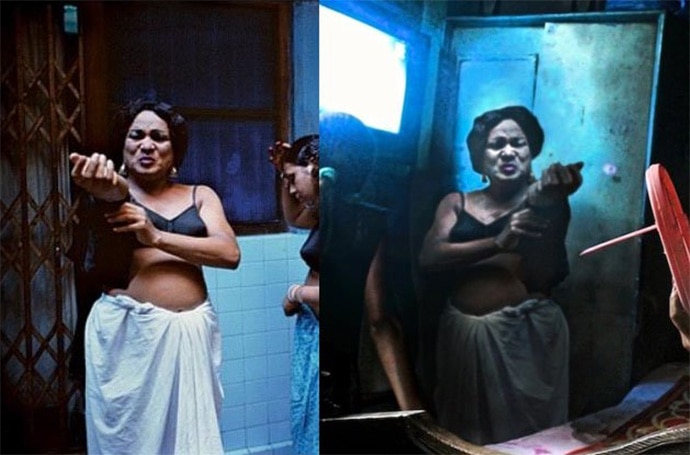 A comparison of Datta's and Mark's photos. [Photo: PetaPixel]

“You can see for yourself how neatly (or not) he has managed to pick the lady in the backdrop off Mary’s legendary work and claimed it as a part of his own composition,” Bhat said to PetaPixel. “It takes someone who has trawled through plenty of Mary’s work to spot the glitch.”

.@souvid Can you explain why a person from a Mary Ellen Mark pic in 1978 ends up photoshopped into your news published picture here? pic.twitter.com/DWqwJFf75j

It seems that after being accused of plagiarism, the renowned photojournalist has tried to remove all his presence from the social media. He has deactivated his Twitter and Facebook accounts. He also seems to have taken down his website.

Datta passing off this as his own work, with a fabricated story along with it, casts aspersions on his entire body of work, and the work of others we take for granted. May this serve as a handy lesson to all: even in the age of Photoshop, reality does eventually catch up and the fake gets caught in its own virtual trap.

Post your comment
#Photography, #Sonagachi, #Mary Ellen Mark, #Plagiarism
The views and opinions expressed in this article are those of the authors and do not necessarily reflect the official policy or position of DailyO.in or the India Today Group. The writers are solely responsible for any claims arising out of the contents of this article.