Stifling song: You may disagree with TM Krishna's views. But you cannot stifle his singing

Love him, hate him, disagree with his secularism, troll him for his views — T M Krishna cannot be gagged or ignored

In 2008, as a starry-eyed Carnatic music buff in Chennai, I used to download and print the entire schedule of concerts held in the Margazhi music season across Chennai (spanning over a hundred A4 sheets — front and back printed) and then assiduously highlight TM Krishna’s concerts.

I would ensure I would be present at the concert — even if it meant going for a 4 a.m. shift to work on the television desk, rush for a hurried lunch and scoot to attend the concert, get barely four hours of sleep before rushing to work the next day, and the cycle repeats. As I moved cities, I would work for weeks without a break and take my weekly offs and compensatory offs to travel to attend Krishna's concerts in other cities.

Krishna’s music brought me out of chronic depression and gave me a reason to smile.

His is a voice that started speaking secular sense in the world of music which was (is) blaring Hindu nationalism — as a refreshing respite initially, as a much-needed note of dissent against the political climate lately.

Krishna is no novice when it comes to controversies.

Be it boycotting the Margazhi season, his outspoken views on casteism in Carnatic music, his demand to oust corporate giants and restore the forests of the Western Ghats, the restitution of social harmony in strife-torn Jaffna, and more recently, singing Christian hymns in ragas that dominate Carnatic music, he's done it all.

As Ramachandra Guha rightly put it, “Krishna is a force of nature” — unstoppable — be his music or be his views.

When a scholar like myself is stopped from speaking, that is intolerance. When a great musician like TM Krishna is prevented from performing, it is not intolerance, but barbarism: my column in @IndianExpress :https://t.co/dJ6AwdD9Jg 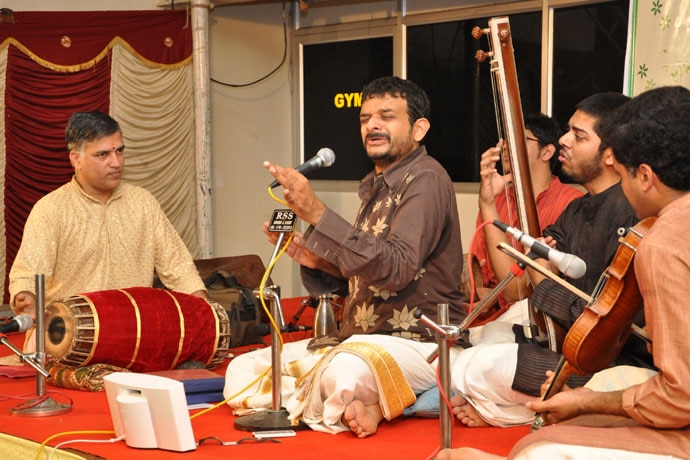 Stop his concerts, troll him for all you want — Krishna is a force of nature. Unstoppable and unfazed (Photo: Rajeshwari Ganesan)

Most of us, music and classical dance buffs, have experienced myriad hues of the arts under the auspices of SPIC-MACAY — an institution set up by Dr Kiran Seth to take the splendour of Indian music and dance traditions to young India. As college students in Delhi University, we have experienced it all — from Pt Hariprasad Chaurasia to Leela Samson, Padma Talwalkar and of course, Krishna. Such is the stage that SPIC MACAY sets that during an event at IIT-Delhi in the summer of 2017, Krishna ended a traditional Carnatic concert with Dwijendralal Ray’s composition Dhana dhanya pushpa bhara — and the 500-odd audiences of all age groups were completely spellbound.

The same SPIC MACAY that was to host Krishna as a part of their two-day 'Dance and Music in the Park' in Delhi, together with the Airports Authority of India (AAI), on November 17, 2018.

Krishna had tweeted AAI’s invitation and opened the floodgates of trolling. AAI was targeted by right-wing trolls for sponsoring the concert as a government body “using public funds to sponsor Krishna” — besides, trolls reportedly pointed out, “he sings about Jesus and Allah", apparently calling him “anti-India”, “converted bigot” and “Urban Naxal”, among other things.

A flustered AAI apparently informed SPIC-MACAY on Tuesday night that the concert was called off due to “some exigencies of work,” and that the organisation is no longer “in a position to go ahead with the dance and music concert.” A statement from AAI held "urgent engagements" responsible. It said new dates would soon be announced for the two-day event.

An unperturbed Krishna says “Give me a stage anywhere in Delhi on November 17 — I will come and sing. We just can’t let ourselves be cowed down by this kind of threats. However, I wish they could have come up with a better excuse to cancel my performance.”

The stage is most likely to be provided by the Delhi government now.

However, it is shameful that bodies like AAI and SPIC MACAY seem to choose to be intimidated by trolls who clearly know nothing about the sublimity of Krishna’s music or any fine art form, for that matter. Have we reduced ourselves to being unsettled by such intolerant communalists? While the question has been raised constantly for the past four years when it comes to freedom of expression, it is time we ask it again — are we a truly secular democracy or are we heading towards an authoritarian regime with ultra-right wing Hindutva elements at the helm?

The trolls can cancel Krishna's concert, but they can never gag his voice — musically or socially.

We Delhiites are sorry, Krishna.

Perhaps we need to evolve more to be able to understand your music — and your views.