Why there cannot be another Talat Mahmood

Dev Anand sang this song on screen in Patita (1953). His playback singer was Talat Mahmood. Talat could well have been singing about most of his own songs.

His voice has been variously described as serene, melancholic, soulful, ultra-soft, romantic, majestic, hypnotic, poetic. But the two adjectives which truly capture the uniqueness of his voice are velvety and silken. Add to that his Lucknowi grace (he hailed from Lucknow), his Urdu diction, his inflexion, his nazakat, his intonation, his enunciation, his soz, and you have an aristocrat among singers. The vibrato in his voice, a gift of God, added that extra ‘something’ to his voice. Something beyond replication.

There have been many clones of Mohammad Rafi. There have been (fewer) clones of Mukesh. Every third Bengali, and many others, copy Kishore Kumar and Hemant Kumar (Hemant even had two soundalikes in the film industry when he was active – Subir Sen and Dwijen Mukherjee). But Talat? No chance. It just wasn’t possible.

Having said that, there was a singer in Pakistan – Salim Raza – who did try to emulate Talat. One slice of history, not well known, is that Mehdi Hassan – the Shehenshah of Ghazals – was a devotee of Talat, and began climbing the ladder of success on the back of Talat’s two songs. At a public performance in Karachi in 1957, he sang Talat’s Ek Main Hoon Ek Meri Bekasi Ki Shaam Hai from Tarana (1951) composed by Anil Biswas and Husnwalon Ko Na Dil Do from Babul (1950) composed by Naushad. The crowd went ecstatic and thus began Mehdi Hassan’s glorious career.

Another fact, again not widely known, is that Talat was very popular in Pakistan. He visited Pakistan and sang three songs for two Pakistani films, Ghanghor Ghata (1961) and Chiragh Jalta Raha (1962). The latter film was the launching pad of the legendary film actor Mohammad Ali. Talat also sang seven non-film songs including Khuda Woh Waqt Na Lae for which he was presented a shield by the Gramophone Company of Pakistan.

So how did Talat’s own journey begin? His conservative Muslim background meant that singing was a big no-no. However, you cannot keep talent shackled. Despite his family objection, he opted for singing. He began learning music in Lucknow in the late 1930s. Having honed his talent, his first port of call was All India Radio, Lucknow in 1939 (when he was 16), where he began singing ghazals. HMV offered him his first disc in 1941. He then moved to Calcutta. In 1944 came the hit Tasveer Teri Dil Mera Behela Na Sakegi — a song that became hugely popular.

In 1949 he came to Bombay (now Mumbai), to sing for the Hindi film industry. His big break came with the song Ae Dil Mujhe Aisi Jagha Le Chal Jahan Koi Na Ho composed by Anil Biswas for Arzoo (1950). Talat had arrived! And, as is normally the case, his family belatedly welcomed his decision when he gained foothold and respect in the film industry.

Talat sang about 800 songs over four decades. Plus, he recorded about 200 non-film ghazals and geet. Not a long list. But each song is as classy as they come. What was Talat’s contribution, besides of course the immense joy he provided his countless fans? He was the founder of the modern semi-classical as well as the non-classical ghazal. His influence upon other contemporary and succeeding ghazal singers has been profound. He transformed and re-energised the art and form of ghazal singing. His throat and his tongue were the ideal tools of the trade to popularise the genre. He conquered the souls of countless people throughout the globe – the cognoscenti, as also the man on the street. He was to the ghazal born! Each song by a composer had to be fitted to Talat’s own genius. (Photo: talatmahmood.net)

Most songs, especially in the 1950–1970 period, can be identified by the way they have been tuned by their music composers. Each music director had a distinctive style which was stamped on the song. So, a song tuned by OP Nayyar, SD Burman, Madan Mohan, Roshan, Naushad and others could be clearly identified. Some people went even further and could identify a Shankar song from Jaikishan’s. But this test failed with Talat’s songs. His songs were HIS songs and the music directors had to leave their compositional style outside the recording studio. The songs had to be fitted to Talat’s own genius. Here the singer demanded the bespoke suit, and his singing talent brooked no ready-to-wear apparel.

Who could have imagined OP Nayyar composing Pyar Par Bas Toh Nahin Hai from Sone ki Chidiya (1958)? The song is not in the OP Nayyar style by any stretch of imagination. Incidentally, this film had Talat as a hero, but his film career was not a success. Or Ravi’s Sab Kuchh Luta Ke Hosh Mein from Ek Saal (1957), or Khayyam’s Shaam-e-Gham Ki Kasam from Footpath (1953), or Roshan’s Main Dil Hun Ek Armaan Bhara from Anhonee (1952), or Shankar-Jaikishan’s Tum Toh Dil Ke Taar Chhed Kar from Roop ki Rani Choron ka Raja (1961) — Talat also sang romantic songs once in a while, and SD Burman’s Jaayen Toh Jaayen Kahaan from Taxi Driver (1954) – which incidentally fetched SD Burman his first Filmfare Award.

All these songs, and many more, are Talat’s songs and not that of the composers, which is a rarity. Of course, this is just a generalisation. Composers like Madan Mohan and Salil Chowdhury, who shared a special bonding with Talat, are some exceptions whose style of composing was in complete unison with Talat’s unique singing élan. Witness Talat’s songs in Jahanara (1964) – Tere Aankh Ke Ansoo Pee Jaaoon, Main Teri Nazar Ka Suroor Hun, Phir Wohi Shaam Wohi Gham Wohi Tanhai Hai. Madan Mohan did not listen to the movie’s writer-director who wanted Rafi. Madan wanted the film to be Talat’s long-overdue comeback. His career had been floundering by then. And what winners they turned out to be, even though the film tanked. Salil’s Talat oeuvre is full of gems including Itna Na Mujhse Tu Pyar Badha, and Aansoo Samajh Ke Kyun Mujhe Aankh Se Tumne Gira Diya from Chhaya (1961), and Raat Ne Kya Kya Khwaab Dikhaye from Ek Gaaon ki Kahaani (1957).

So why is only the Talat version of these songs (called twin songs or tandem songs) fresh in public memory? The supreme quality of Talat's voice made singers nervous. Lata, in particular, dreaded singing not only duets with Talat because she felt that his rich and smooth voice would render hers dull in comparison, but also tandem songs which Talat had sung. 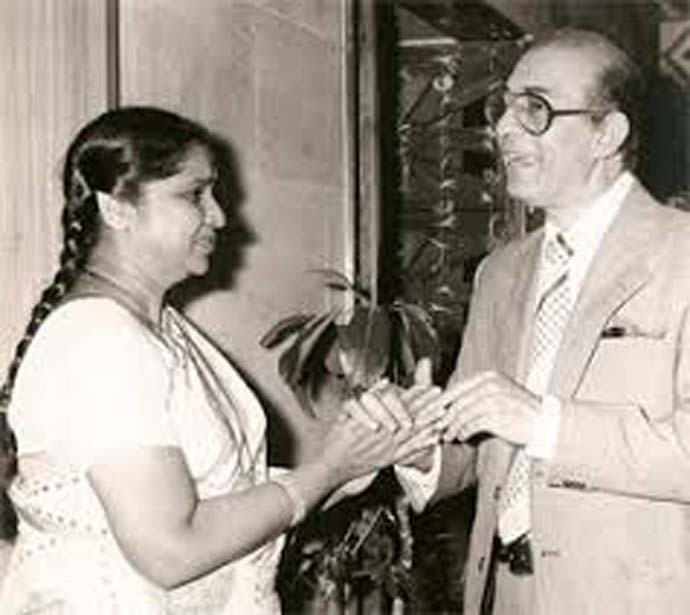 Asha Bhosle (L) sang 51 duets with Talat Mahmood (R) during her period of struggle (1951-1959) when she was suffering from Lata-complex. (Photo: talatmahmood.net)

The 1960s saw a change in audience tastes. Ghazals and heart-rending ballads were not popular anymore. Talat continued to record songs, but less in number. His last soundtrack recording was in 1985. He went on highly successful concerts abroad including at the Royal Albert Hall in London and Madison Square Garden in New York, drawing packed houses of music lovers.

I attended one of his concerts in Delhi in the early 1980s. The bespectacled, soft-spoken voice that showed no signs of wear and tear, suit and tie, and his best of the best sung to his devotees packing the hall to the rafters. It was a magnificent mehfil, a top-drawer soiree.

As a person, Talat was soft-spoken and decent. Dilip Kumar, who teamed up with Talat for innumerable hits, termed Talat a perfect gentleman.

His goodness came at a cost. On one TV show, while discussing Geeta Dutt, Asha Bhosle remarked, "Unke saath koi ek male singer Mahmood-Mahmood kar ke tha (A male singer called some Mehmood-Mehmood used to be with her)." This from Asha, who sang 51 duets with him during her 1951-1959 period of struggle, when she was suffering from the Lata-complex. Most tasteless remark! Her non-acknowledgement of OP Nayyar, who gave her her self-confidence, made her realise her self-worth, smoothened her rough edges, trained her, removed her from out of the shadow of her sister, is still understandable — there is a personal animus involved. But Talat? Forgetting his name? Forgetting his contribution? Not done! 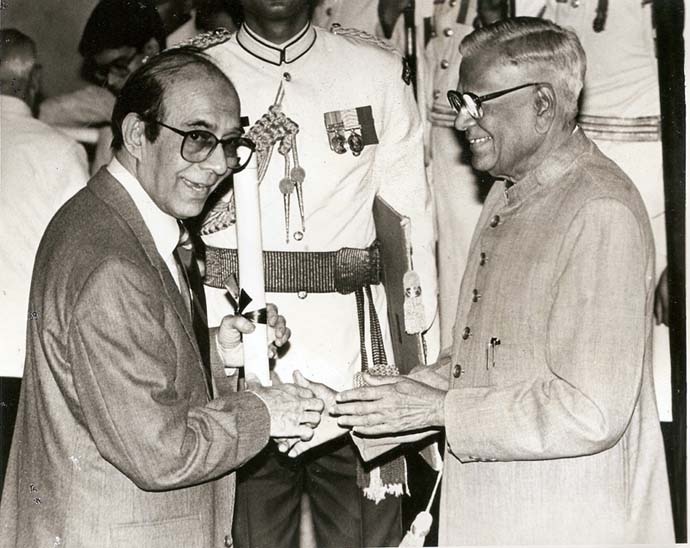 Government recognised his worth and awarded him the Padma Bhushan in 1992. (Photo: talatmahmood.net)

In Aadmi (1968), even Naushad (who had a very successful run with Talat) was arm-twisted by Manoj Kumar to take Mahendra Kapoor as his playback singer in the song Kaisee Haseen Aaj Baharon Ki Raat Hai, even though Talat had done the recording and the album had been released. So bizarrely, the film had Mahendra Kapoor, while the album had Talat. It is a pity that both Naushad and Dilip Kumar (the other hero) could not take a stand despite their most productive partnership with Talat in the earlier days.

Shockingly, Talat did not win a single Filmfare Award, though he was nominated just once for Jalte Hain Jiske Liye from Sujata (1959). But the government recognised his worth and awarded him the Padma Bhushan in 1992, in recognition of his artistic contributions in the spheres of cinematic and ghazal music.

Today we observe his 22nd death anniversary — he died on May 9, 1998. As he so dulcetly put it in one of his iconic songs (amended suitably):

Post your comment
#Bollywoood, #Asha Bhosle, #Op nayyar, #Lata Mangeshkar
The views and opinions expressed in this article are those of the authors and do not necessarily reflect the official policy or position of DailyO.in or the India Today Group. The writers are solely responsible for any claims arising out of the contents of this article.