It was a term of respect not derision.

If you were old enough to watch movies in 1981 and were fond of Hindi cinema, there’s every bit of chance that you have watched Umrao Jaan by director Muzaffar Ali and were mesmerised by Rekha in the title role and enchanted with the songs.

Of course, back then I just took the film just as a film and felt very nostalgic for the culture that it showcased. I had heard from my parents and grandparents of the niceties of society and the etiquette that prevailed and these were beautifully showcased in the movie.

If you were older you would have seen Pakeezah, another famous courtesan movie.

I had seen both and many others but the subject caught hold of me when I came across Azizan Bai, a courtesan in Kanpur, who fought against the British in the 1857 uprising and was executed by the British once they subdued the "rebels".

She had no personal grudge, unlike many who joined to settle scores, against the British, but was inspired by Nana Sahib.

Courtesans like Azizan allowed their salons known as balakhana or kothas (because they were on the first floor with ground floor being shops) to be used as meeting places for the "rebel sepoys" and helped pass on messages. They spied on their British clients, encouraging them to talk and relayed information to the sepoys.

When the British were punishing the perpetrators of the uprising, the might of their wrath also fell on the courtesans. It was then that they discovered that the courtesans were in the highest income brackets, owning huge properties and enjoying an elevated status in society.

So who were these courtesans, or tawaifs, as they were known? Why do we now think of tawaifs as prostitutes? 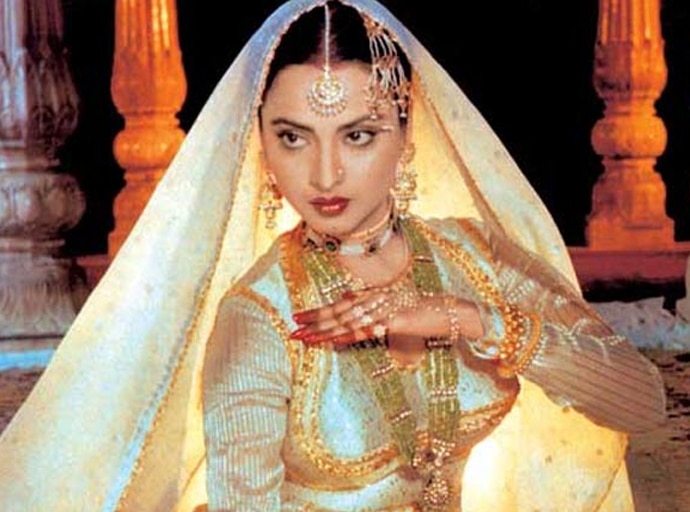 Rekha in and as Umrao Jaan.

As historian professor Veena Oldenberg wrote in her book, The Making of Colonial Lucknow, "To relate tawaifs to prostitution is an extremely corrupt portrayal of the institution.”

Let us enter the world of an 18th and 19th century tawaif.

The word tawaif comes from "tauf", which means to go round and round. Interestingly the word "tawwaf" or circumbulation of the Holy Kaaba also comes from tauf.

Tauf was used for a band of iterant musicians and as tawaifs were highly skilled musicians, singers and dancers, they were given this name. It was a term of respect not derision.

In the 16th Ain-e-Akbari, which details Akbar’s administration, there is a chapter on the classes of singers and a description of a class called "Kanjari":

“The Kanjarí: The men of this class play the Pakháwaj, the Rabáb and the Tála, while the women sing and dance. His Majesty calls them Kanchanís. Their extraordinary performances are beyond description and each of them affects a special style of vocal accompaniment.”

The name "kanchani" or gilded was given to the the accomplished singers and dancers.

According to historian Mahmood Farooqui, derawali tawaifs would be someone who identified with an establishment, that is, had a pedigree, while a kanchani was a standalone.

Naseem Ara reveals more about kanchanis and derawali tawaifs in a story in Amritlal Nagar’s book, Ye Kothewaliya’n, written in the 1960s . Naseem Ara in conversation with the author reveals that kanchani was a caste to which many of the tawaifs of Lucknow belonged, and she was from the derawali community. She proudly says that the derawali community were at the top of the tawaif community.

The girls were trained in music and dance from the age of five-seven, and by the time they were 10-12, they would accompany older girls in small-sized gatherings. As they grew up they would be attached to some rich patron.

The 19th  century Derawali tawaifs indulged in physical relationships with one person according to Naseem Ara and the patron would usually look after the entire family. If the patron died, they lived their life as his widow. If there was any issue, it was brought up by the mother and in the profession.

Interestingly, derawali tawaifs did not need to employ pimps as it was their singing and dancing skills which brought them rich, noble and knowledgable clients and not the riff-raff that could be solicited off the streets.

Naseem Ara in fact talks very proudly of being a khandani (pedigreed) derawali. She rubbishes the idea of girls being kidnapped and brought to the kothas with a simple "that doesn’t happen amongst the derawali tawaifs".

It was a hereditary profession and Oldenberg’s research suggests that the portrait of a young girl being kidnapped as shown in Umrao Jan was far from the truth. In fact, some of the women she interviewed for her essay, "Lifestyle as Resistance: The Case of the Courtesans of Lucknow", also say that Mirza Hadi Ruswa’s book, Umrao Jaan Ada, a fictitious tale of a courtesan did much harm to their image.

Another word that is used today as a gross abuse is "randi". Ruth Vanita, in her well-researched book, Dancing with the Nation, writes that the word "randi" has been subject to "semantic degradation as up to the 19th century it primarily referred to an unmarried woman, especially one belonging to the nobility". Today, it means a whore and in Old Delhi we have a mosque built in 1832 called Randi ki Masjid because it was built by Mubarak Begum, a dancing girl and mistress of  Sir David Ochterlony, the first British resident of Delhi. The name has not been a deterrent and I have always seen the mosque full of men praying whenever I have gone there at prayer times.

In the early 20th century, when Abdul Halim Sharar writes his book on the life and culture of Awadh under the nawabs, Guzishta Lucknow, he describes three classes of courtesans in Lucknow and kanchanis are one of them.

Kanchanis, he says, belong to the kanchan tribe and that their primary profession was to sell their virtue. He adds they came from Delhi to Lucknow. So the change has already taken place. One reason, of course, would be that after the atatcks on Delhi by Nadir Shah and Ahmed Shah Abdali, the mughal empire was tottering and royal patronage no longer enough to sustain a high-class lifestyle. Thus, many women whose primary profession was to sing and dance had to live by "selling their virtue".

The other classes that he mentions are "chunawalis", women who used to sell slaked lime, but have now become bazaar women, and the third is "nagrant". Nagrants are from Gujarat and he calls these three groups the "queens of the bazaars".

They were so rich and powerful that Sharar writes, “A cultivated man like Hakim Mahdi, who later became Vazir (prime minister of Awadh), owed his initial success to a courtesan named Piyaro, who advanced her own money to enable him to make an offering to the ruler on his first appointment as the governor of the province of Awadh. These absurdities went so far that it is said that until a person had association with courtesans he was not a polished man... At the present time (c 1913) there are still some courtesans with whom it is not reprehensible to associate, and whose houses one can enter openly and unabashed.”

Obviously, Sharar is writing post-1856 when the traditional tawaifs had all, but been destroyed by the British.

An interesting point to remember about the courtesans of that era is that they were not just repositories of art and culture, but independent women. Men were dependent on them and not the other way round. They employed male musicians, music and dance teachers, had male clients and even pimps who were employed by them to bring business.

Oldenberg, who has researched the tawaifs of Lucknow extensively, found out that when the British went after all those who had joined the 1857 uprising, found that their occupations was given as "dancing and singing girls", and “as if it was not surprise enough to find women in the tax records, it was even more remarkable that they were in the highest tax bracket, with the largest individual incomes of any in the city".

They owned houses, orchards, manufacturing and retail establishments for food and luxury items which were all confiscated by British officials for "their proven involvement in the siege of Lucknow and the rebellion against British rule in 1857".

Just confiscation of property was not enough, the most attractive of the tawaifs were sent to British garrisons to service the troops there. The tawaifs who excelled and contributed to classical music, dance and the Urdu literary tradition, and were considered an authority on etiquette, now became common prostitutes.

There was a time when sons from noble families were sent to the courtesans to learn etiquette and niceties of moving in society. Now British officers and troops came to satisfy their physical desires.

Women who were said to be the originator/popularisers of several art-forms and had perfected the art of kathak, dadra, ghazal, and thumri and had done much to keep these art forms alive were reduced to dancing only to tittilate. In fact, Kathak a mixture of Persian and Indian dance form gained popularity in the balakhana and courts of Awadh along with thumri, dadra and ghazal. Nawab Wajid Ali Shah's himself a gifted kathak dancers, singer and poet, encouraged the arts. It was a golden age of music and dance.

Post-1857, it wasn’t only the Mughal dynasty or Nawabs of Awadh who were destroyed, but an era was destroyed: A culture was destroyed. The "arbab-e-nishat" or kathak dancers and classical singers were now the "nautch girls" (from word naach or dance).

Today, the word tawaif is used for a woman in the flesh trade. Those that learn to sing and dance no longer sing Ghalib or Dagh’s ghazals. They gyrate to lewd double-meaning film songs to tittilate the customer.

There are no balakhanas, where music and dance flourished, just kothas where more often than not, girls are kidnapped, lured and forced into the flesh trade against their will.

#India, #British, #Courtesans, #Tawaifs
The views and opinions expressed in this article are those of the authors and do not necessarily reflect the official policy or position of DailyO.in or the India Today Group. The writers are solely responsible for any claims arising out of the contents of this article.