'Anyone to whom equality is integral is feminist': Artist Sonia Khurana talks about her aesthetic

A rare Indian performative artist, Khurana uses her own body, lying in the street, trying to fly, paying tribute to icons of drag, to explore outer situations and inner realities. And to challenge them.

She tries to defy gravity, flapping her arms like they could be wings. She lies down in the streets where pigeons gather around her. She is always in the streets, looking at the top of a plastic flower in an act of self-reflection. She inhabits abandoned houses.

Sonia Khurana is perhaps the first artist in India to use her body and sound in visual art practice to explore situational contexts and inner reality.

Khurana will be showcasing her work at the fourth edition of the Kochi-Muziris Biennale curated by Anita Dube, which began in December and will go on till March 2019. The Biennale has more than 50 per cent women artists from all over the globe, and it claims that it aspires to indulge in the possibility of a non-alienated world.

Khurana (50) studied at the Royal College of Art, London — and is among India’s few performative artists.

In her first video work, Bird (1999), a naked Khurana is flapping her arms attempting to fly, but is weighed down by her human form. The exposure of the body of the artist is a challenge to the norms of female beauty. Sonia Khurana is perhaps the first artist in India to use her body in visual art practice to explore contexts and feelings. (Photo: Yasir Iqbal)

At the “ME WE” exhibition held in the capital in June this year, put together by cultural curator Myna Mukherjee, Khurana’s showcase was her own photograph — a sequinned top, bell bottom pants. She called it an “an act of double drag, and a tribute to (her) favourite, Egyptian drag queen Om Divine”.

Her works can be categorised as a performance of gender, and while answering how gender affects her art practice in access and in implementation, she quotes feminist and educator Linda Nochlin’s 1971 essay ‘Why Have There Been No Great Women Artists’.

Khurana speaks to India Today about her practice and her engagement with gender politics and aesthetics.

Would you call your work feminist?

Yes, and not only. I don’t sit comfortably with any one label, or labels, at all.  And I tend to resist dogma, or overt modes of address.

What constitutes feminist work is often understood with prejudice — in reductive ways.

A feminist consciousness, whether in art made by men or women, or others, offers perspectives that question assumptions in art concerning sex-role stereotypes, or gender, to begin with.

It challenges prevailing [read: patriarchal] notions, such as notions of beauty, and a discourse of power. I work with a discourse of power that is deliberately tangential. Even as I try to re-map established realms, my natural predilection is to do this through deliberately poetic intimations, through which I persistently explore and re-define the space of the political.

I like to believe that anyone who engages with their own humanity, and to whom equality is integral, is feminist.

On a slightly separate note, we need feminism to remind us that art is made by both men and women, and equally importantly. To quote Roberta Smith, a New York Times art writer: ‘The word feminism will be around as long as it is necessary for women to put a name on the sense of assertiveness, confidence and equality that, unnamed, has always been granted to men.’.

Is art subject to gender? How does gender affect your work?

My practice largely deals with interiority and embodiment; the self in relation to the world. My performative, lens-based projects, such as Bird, Logic of Birds (2006), Flower Carrier (2006), and more recently, Lying Down On The Ground, a project that continues from 2008 to the present, are acts of refusal, resistance and a subversion of gender roles, often in public spaces, among other things. 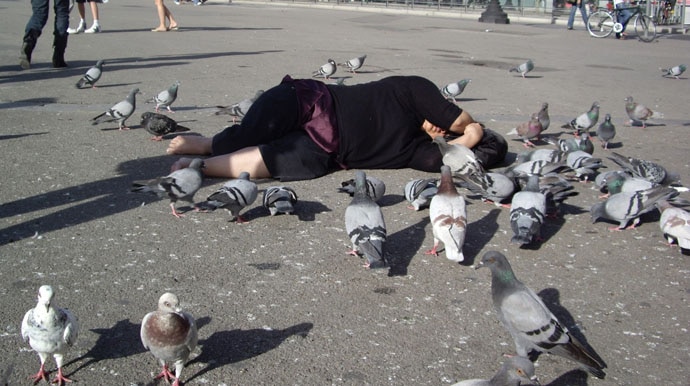 Head-hand and Mona’s Song recognise the fluidity of gender, while also addressing the question of race and class, which are intrinsically linked to gender.

Do you know that while women represent more than half of the fine-art school graduates in India, and indeed, in the rest of the world, at least in present times, the share of female artists drops to about 5% in the art market?

This disparity is also reflected in who gets public art commissions, and the art market.

Potential explanations range from differences in endowments and opportunity sets to perceived biases on institutional and market levels. The same goes for art institutions and other art professionals, and indeed, in all spheres.

What is a feminist aesthetic and how is it present in your work?

Feminism is not a style, or a formal approach. It is a philosophy, an attitude and a political instrument.

It is more important than pop, minimalism or conceptual art because it is, by its very nature, bigger than they are, more far-reaching and life-affecting. In addition, feminism is not of itself an aesthetic value. It is an idea that can assume an organic force in some artists’ work, but others just pay it lip service without much exertion or passion.

Post your comment
#Birds, #Visual arts, #Sonia khurana, #Feminist art
The views and opinions expressed in this article are those of the authors and do not necessarily reflect the official policy or position of DailyO.in or the India Today Group. The writers are solely responsible for any claims arising out of the contents of this article.