Thursdays were for pulao lunch. We — siblings and cousins — could almost smell pulao as our rickshaw wheeled us slowly back from school.

Lunch would be invariably late, for several kilos of pulao had to be prepared in a large degh over wood fire in the old kitchen. Zarina Bua, our cook, would be muttering over the quality of meat or rice, ready to blame the lack of perfection on our old retainer, Khalil Khan.

My grandmother believed that the spirits of our dead ancestors, particularly her husband's, came down on Thursdays and prayers had to be recited over a sample of steaming pulao dish before we got to eat. It always confused us children — were the spirits hungry? Did they just eat pulao? We never asked and stood with our Nani leading the prayer, our palms raised heavenward, heads covered respectfully, stomachs rumbling.

The prayer over, the now 'holy' pulao was taken away and mixed into the degh (to make all of it holy), and we finally got to eat — though not before a large portion was taken out for the maulvi of the neighbouring mosque and the beggars living beyond our area of reference. 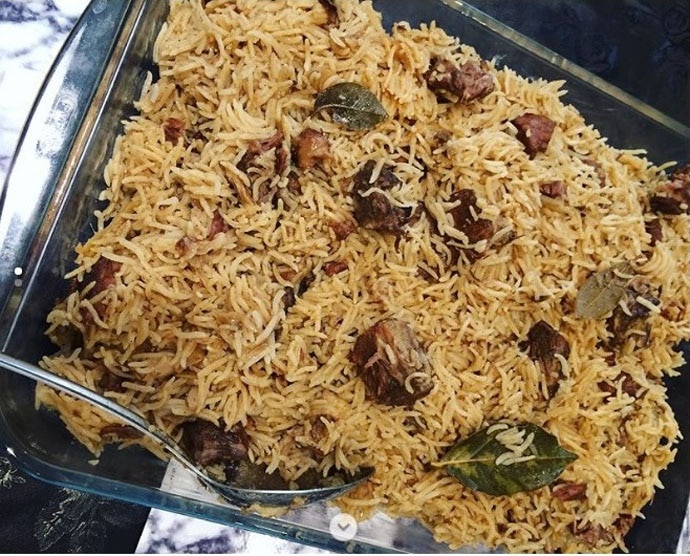 The Rampuris love their yakhni pulao — the pretentious Biryani won't do. (Photo: Instagram//themodernpakistanicookhouse)

Pulao, an aromatic rice and meat dish, has a huge presence in all traditional Muslim households. No feast, funeral or prayer meeting is complete without it. In Rampur, the timing of serving the pulao is crucial. You are supposed to wait for it at the table while it is on dum — simmering over low heat in a sealed pot or cooker.

The literal translation of dum is life. The pulao becomes lifeless when the dum steam escapes.

This timing of the pulao is even more critical at Rampur funerals. Right when the coffin is taken out of the house on the shoulders of grim-faced mourners, leaving behind a gaggle of crying, wailing and sniffing women, and the grief has subsided to a contained level, a cart bearing deghs of pulao trundles over the brick-laid lane and morose-looking women lay out the piping hot feast to comfort the mourners.

The perfect timing never ceases to amaze me — it is crucial that the pulao should be served before all its steaming life, its dum, escapes.

The Rampuris love their yakhni pulao and turn up their noses at the richer and spicier version of the meat-rice dish called the biryani, generally served in Lucknow and Hyderabad.

The biryani is rebuffed by the Rampuris as a soulless mixture of qorma meat curry layered with boiled rice.

The procedures are totally different — the base for yakhni pulao is the boiled meat stock and it is closer to the Persian version. Biryani, on the other hand consists of layering spicy cooked meat curry with parboiled rice.

Food historian Lizzie Collingham writes in 'Curry: A Tale of Cooks and Conquerors', that the delicately flavoured Persian 'pilaf' met the rich, spicy Mughal dishes in the kitchens of Emperors Humayun and Akbar to create the biryani.

I'm not a foodie or a recipe fanatic. Or, maybe, like for a lot of things in my life, I am in denial. So, it was by sheer luck that I came upon a 150-year-old Persian manuscript on Rampuri cuisine at the grand Raza Library in Rampur, while researching for my novel. A page from the Persian manuscript Khwan-e-Nemat, dating about 1870 AD. (Photo courtesy: Author)

The Raza Library, renowned all over the world for its manuscript collection, is housed in the erstwhile court of the Nawab of Rampur and peopled with crusty librarians who guard the ancient manuscripts with self-righteous doggedness.

The gentleman in charge of the manuscript section sits in a gloomy room surrounded by huge steel almirahs with their precious stacks — a caricature of librarians with his stiff, white, threatening beard, scrawny frame and thick glasses.

He is only affable towards scholars who come armed with the knowledge of Persian, and I can just manage basic Urdu. He had banned one of the research scholars from assessing the recipe manuscripts because he found him too casual. The researcher chanced upon me pottering around, trying to find clues to the vanishing culture of Rampur, and handed me the names of the recipe manuscripts that held the key to pulaos, kababs and qormas.

Food is an important part of Rampuri culture and I presented myself to the librarian asking for the manuscript. He looked at me with disdain over his rickety, steel-framed spectacles, asked me the Persian word for the art of cooking, and, finding me wanting, summarily dismissed me.

But small towns have a deep respect for connections and genealogy — very soon, I found myself back in the inner sanctum of the library, facing a slightly mellowed librarian. 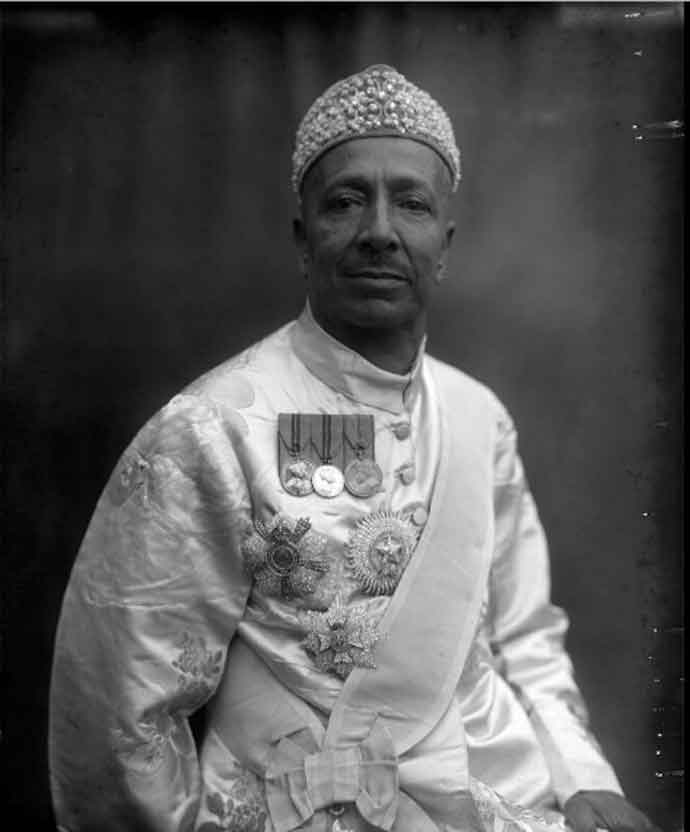 Nawab Hamid Ali Khan, whose kitchens had 150 cooks — each specialising in one dish. (Photo: Wikimedia Commons)

"Why didn't you tell me that you were the granddaughter of Jabbar Khan, the engineer?" he demanded, a bit miffed at being commanded by the Director to assist me. Thus, the treasured manuscripts were revealed to me, and I was allowed to secretly take pictures on my iPad.

The manuscripts are thin volumes closely handwritten in Persian dating back to the 1870s, the reign of Nawab Kalbe Ali Khan (1865-87). It is unclear if they had been commissioned or collected, but they must have served as a record of the recipes for dishes cooked.

There was a separate rice kitchen at the Nawab Rampur's 'Khasbagh Palace' — and the khansama cooks were legendary in dishing out the most exquisite and innovative rice dishes.

Nawab Hosh Yaar Jung Bilgrami, who was associated with the durbar of Nawab Hamid Ali Khan from 1918 till 1928, writes in his account Mashahidaat that there were 150 cooks in the kitchens, each specialising in only one dish.

"Such cooks could not be found with the Mughal emperors or in Iran, Turkey and Iraq." He writes of at least 200 dishes cooked at a banquet, including English and middle-eastern fare.

Pulao Shahjahani was possibly a dish imported from Delhi to Rampur kitchens. We know that a number of cooks from Delhi and Lucknow, just like other artists, sought employment at Rampur after the Revolt of 1857 and the subsequent fall of dynasties.

Most Rampuri homes today cook the basic yakhni pulao — so, the grand repertoire of 50-odd styles in the manuscript was very intriguing.

It ranged from the grand Pulao Shahjahani, the sweet pulaos — Mutanjan Pulao, Pulao Sheer Shakkar (milk and sugar) — to the humble anannas (Pineapple) pulao, imli (Tamrind) pulao etc. Most of these varieties are unheard of, and some a part of food memory. 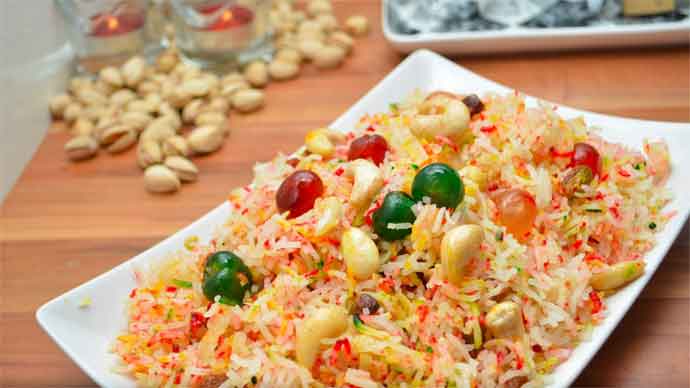 Mutanjan is colourful — but only one of the many shades of the Rampuri pulao.  (Youtube Screengrab)

My tutor, Mr Isbah Khan from the library, a younger and kinder version of the manuscript librarian, helped me with the translation and was extremely patient with my failed attempts at learning Persian grammar. He introduced me to an old khansama who cooked Rampuri fare to make sense of the recipes.

The original cooks of the court have all perished, their children taking up different professions. We were confused and confounded at many levels. The ingredients were measured in daam, tola, masha, ratti and ser — ancient measures with inexact modern equivalents; they were preceded by dots, dashes and slashes, symbols which held no meaning even for the old timers.

At one point of time, I found myself measuring out 550gm of cinnamon for 1 kg pulao! It was absurd. The Raza Library that houses this, and many other, treasures. (Photo: Wikimedia Commons)

But measurements were the least of my worries. The procedure outlined in the recipe was brief, cryptic, making presumptions about our knowledge of cooking. The terminology, usage of words had changed over time.

'When it becomes thick, add meat and some proper masala and keep watching…...'

'Temper the meat with yakhni water. Boil rice in water after putting meat. Evaporate half the shorba. Separate yakhni into two parts.'

What was yakhni and what was shorba? Could it be used interchangeably? What was the 'proper masala'?

There was much changing of deghs and procedures within procedures. In Pulao Shahjahani, one ended up with four vessels to be washed up afterwards. No wonder that with time, we abbreviated the whole intricate procedure into a two-step affair and replaced the degh with the trusty pressure cooker.

I was on the verge of giving up on the venture when I chanced upon two recipe books in Urdu, dating 1873 and 1879, which had the elusive Pulao Shahjahani with the procedure more clearly explained. It was like coming upon the Rosetta stone!

The yakhni had meat boiled with spices and when you remove the meat, the left over water was called shorba! I could finally decode this fascinating recipe.

I tried out the recipe with the old khansama — it turned out to be as elegant and opulent as its name.

The recipe ends with the somewhat philosophical line:

'Dar kami-o-peshi ikhtiyaar-e- hast' ('The excess and paucity of everything is in our hands.)

Also read: How a Nawab humiliated his proud Begum on Nauroz in Rampur