Jurassic Park’s long standing battle against scientific accuracy: The rights and the wrongs

Here are some of the things Jurassic Park didn't quite nail and what it earned in the thumbs up from paleontologists.

Nearly 30 years since Steven Spielberg brought prehistoric beasts back to life on the big-screen, the Jurassic Park saga is coming to its culmination with this weekend’s Jurassic World: Dominion. A franchise that revolutionised special effects in film for decades to come, Spielberg’s adaptation of Michael Crichtons’s novel of the same name, has captivated hearts in its depiction of some of the most beloved, albeit terrifying, creatures in cinematic history. However, in the process of appeasing a larger audience, Spielberg took a few creative liberties in the representation of our reptilian friends, which ended up receiving flak from the paleontological community for its inaccuracies and misrepresentation. Although most of these criticisms could be easily written off owing to the Jurassic Park dinosaur’s unique genetic make-up (nothing like a spot of frog DNA to fill the plot-holes), the film’s dinosaur consultant, paleontologist Jack Horner noted that his job was to “bring a little science into the film, but not ruin it”, in an NBC interview. Here are some of the things Jurassic Park got very wrong and what it earned it the thumbs up from the dino experts:

The most glaring inaccuracies was in the title ‘Jurassic Park’ itself as most of the dinosaurs came from the Cretaceous age rather than the Jurassic age. Granted, Cretaceous Park doesn’t really have the same ring to it, but a true-to-life ‘Jurassic’ Park wouldn’t have T-rex’s or Velociraptors or Triceratops in its line-up to begin with.

The popular narrative surrounding dinosaurs before the film first premiered was that dinosaurs were monstrous, evil creatures. Spielberg and his team successfully shattered those stereotypes, depicting dinosaurs as what they’ve always been: animals. The entire franchise, including Crichton’s original work, hinges around dino DNA found in a mosquito preserved in amber for over 65 million years. Unfortunately, even if such a specimen were to be found in the real world, the DNA would be far too dated and degraded to be preserved at all. Not to mention the fact that the mosquito depicted in the film belongs to a species that doesn’t actually suck blood, let alone dinosaur blood. Sorry Dr. Hammond.

The film really drives the point home in backing the theory that birds evolved from a group of meat-eating dinosaurs called Theropods, the same group to which most of the carnivorous dinosaurs belonged to. The dinosaur’s are constantly compared to birds in terms of behaviour and mannerisms, which has garnered praise from paleontologists. Think twice before you dig into fried chicken the next time. 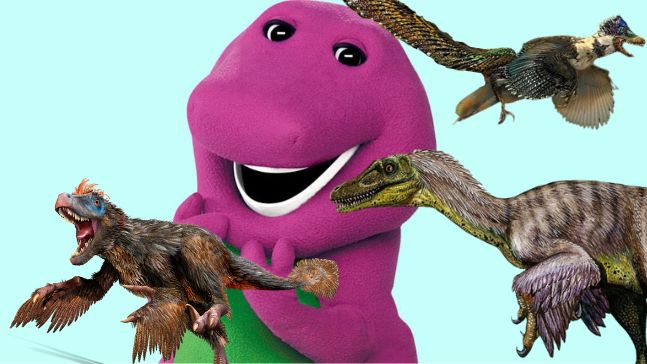 Although research suggested the contrary, it was decided upon that the dinosaurs in the film would be grey and muter shades to seem more menacing. However, the fact remains that research suggests that dinosaurs were found in a variety of different bright colours and feathers.

Actual Velociraptors were covered in feathers and had a Road-runner-style toupee of feathers on their heads. More rainbow-chicken, less killing-machine. Barney the purple dinosaur doesn’t seem too implausible in retrospect. Another misrepresentation that Jurassic Park sought to correct was the depiction of dino tails and their postures in pop-culture. Dinosaurs were seen as large looming figures that dragged their tails around, which was corrected by the films, showing raised, flexible tails. Dinosaurs such as the T-Rex also received a posture correction as the films accurately depicted them in a horizontal posture, with their heads balanced by the weight of their tails, rather than vertically upright. Jurassic Park, more like Jurassic Chiropractor.

One of the most iconic creatures in Hollywood history, the Tyrannosaurus in the franchise (nicknamed Roberta btw) was simultaneously nerfed and buffed for cinematic effect. The massive carnivore was given a weakness for plot convenience which was its poor eyesight, but was also granted explosive speed of almost 65 kmph. The converse of both was true in fact, as T-Rex’s had binocular vision akin to birds of prey and their hollow bones wouldn’t allow them to run faster than 25 kmph without them caving in on themselves. Whether this makes them just as terrifying, if not more so, is still up for debate.

The popular misconception was that dinosaurs were dumb, sluggish creatures which Jurassic Park reversed altogether, portraying them as thinking, intelligent creatures capable of complex behaviours such as pack-hunting, nocturnal stalking and herding.

Evidence suggests that the blood-curdling roar of the T-Rex and iconic ‘Raptor bark were not anywhere close to how the dinosaurs really sounded. While the elaborate sound designs for the vocalisations included elephant bellows, whale blowholes, howler monkeys, oinking pigs and even turtle sex (indeed), paleontologists claim that dinosaur vocalistations would have sounded much closer to birdsong instead. A Jurassic Park: Musical feels pretty apt considering the same. 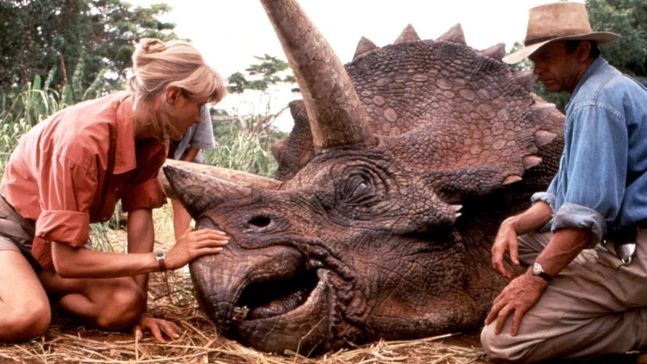 Even with its scientific inconsistencies, Jurassic Park spawned a newfound appreciation for prehistoric studies and paleontology, creating more jobs and funding for the area of science in its entire history. The culture surrounding the franchise has pushed the limits of our understanding of dinosaurs to its limits and continues to inspire many budding paleontologists for years to come.

Despite its controversial cinematic liberties, Jurassic Park has been a groundbreaking, progressive work of fiction, ahead of its time, that has consistently promoted scientific thought and cultivated a sense of keenness and interest in younger generations of fans towards these wonderful creatures of the past. Besides, a bare-chested Jeff Goldblum postulating “life finds a way” should be reason enough to dwarf any number of scientific naysayers.