When I joined the Hindi dramatic society of my college in Delhi University in 2003, it was the mention of the National School of Drama (NSD) that used to get us all starry-eyed. To give us a flavour of the city's theatre, our seniors took us to Mandi House for a show of Premchand's Rangbhoomi. We sat enraptured as we watched professional actors play out the subtleties and complexities of each character, and of a bygone era. It remains one of the most memorable performances I have witnessed. Therefore it was only natural that when those interested in theatre walked out of their colleges, NSD was one of their top priorities. Of course, with few seats and state-wise allocations, not everyone could join. Some people trained at other places in and outside India and brought to Delhi their experiences of physical theatre, theatre with dance, theatre as therapy, theatre with communities, children, theatre as clowns . As these specialisations developed, the theatre circuit in Mandi House expanded to make way for a larger, more organically shaping theatre scene in different parts of the city.

Earlier, there was Gati Studio in Khirki Extention, a space for dance and theatre practitioners to hire for their rehearsals and shows. In Shadipur, Studio Safdar has a small rehearsal-performance space and also a book cafe, which hosts readings, talks, music sessions.

Groups have been hosting intense performances in small cafes. There are "alternate theatre" groups like Third Space Collective that have been successfully staging their shows on bigger stages like Epicentre, Gurgaon. The group I was associated with, Aatish, and and the project I was part of, The Pocket Company's Genderventions, transform atypical spaces like parks, gullies and bus stands for interactive theatre on ongoing social issues. And then there is solo theatre by people like Maya Rao and Mallika Taneja deeply invested in issues like gender justice, power-packed deliveries that have broken the myth of such performances being navel-gazing exercises involving dull monologues. 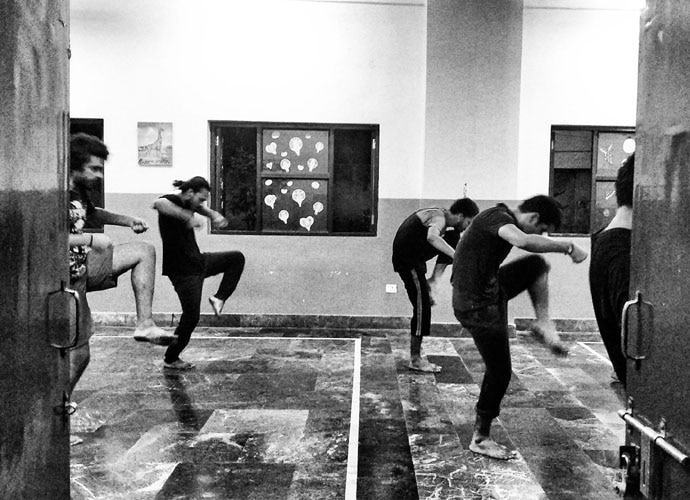 Mohalla Festivals organised by the Lost & Found Trust hosted performances in residential colonies, supported by the resident welfare associations and the residents of the locality. Trees people jogged beneath in parks were used to prop halogens.

Almost all these groups are travelling troupes, performing outside Delhi and, at times, outside India too. Apart from NSD, there are theatre courses in Shri Ram Centre and in newly emerging institutions like Shiv Nadar University and Ambedkar University.

Courses are being designed keeping in mind people in other professions so that they do not have to thwart their love for theatre because of being in full-time jobs. At the same time, schools have opened up to teaching theatre and theatre practitioners are being appointed by them. Theatre Professionals, Mumbai, is a group that has been identifying such artists in Delhi and placing them with schools here. Kingdom of Dreams in Gurgaon is seen by many as an elitist, commercialised theatre space while other actors feel the pay people get there allows them to do other, more ‘soulful’ theatre. Slam Out Loud, an arts group I worked with, is pushing the envelope further and taking theatre to children in government schools.

This varied mix of theatre groups, spaces and methods has been a welcome development in Delhi where theatre enthusiasts do not have to settle for a narrow definition of theatre but can choose to get involved in the kind of theatre that relates best to their individual interest and ideology.